KANSAS CITY, Missouri — Dayton Moore remembers so clearly the vast sections of empty seats inside Kauffman Stadium when he took over as general manager of the Kansas City Royals, and he remembers just as vividly — nearly a decade later — how those seats filled and fans roared as the long-suffering club won the World Series.

Those dueling memories make the thought of playing games in empty stadiums hard for Moore to fathom.

"I know how much strength all players draw from the fans and environment," he said, when asked about plans to play a shortened season without crowds, "and you need that support to get through an entire Major League Baseball schedule."

As lockdowns are lifted and restrictions eased, sports are finally starting to emerge in the coronavirus pandemic. But in virtually every situation, fans are not yet being allowed to attend and the only consensus for now is that there could be a long period of empty or nearly empty seating. Some US universities are modeling for 25% capacity for the upcoming football season or maybe half-full arenas for the ensuing basketball season.

"I think for most sports, a reduced crowd wouldn't negatively impact the overall experience, especially in a situation like baseball or even the NFL," said Katy Lucy, a digital marketing agent from Atlanta whose fandom is split between all things Georgia Bulldogs and the Washington Capitals. "But it would be different for sure for those who attend in person." 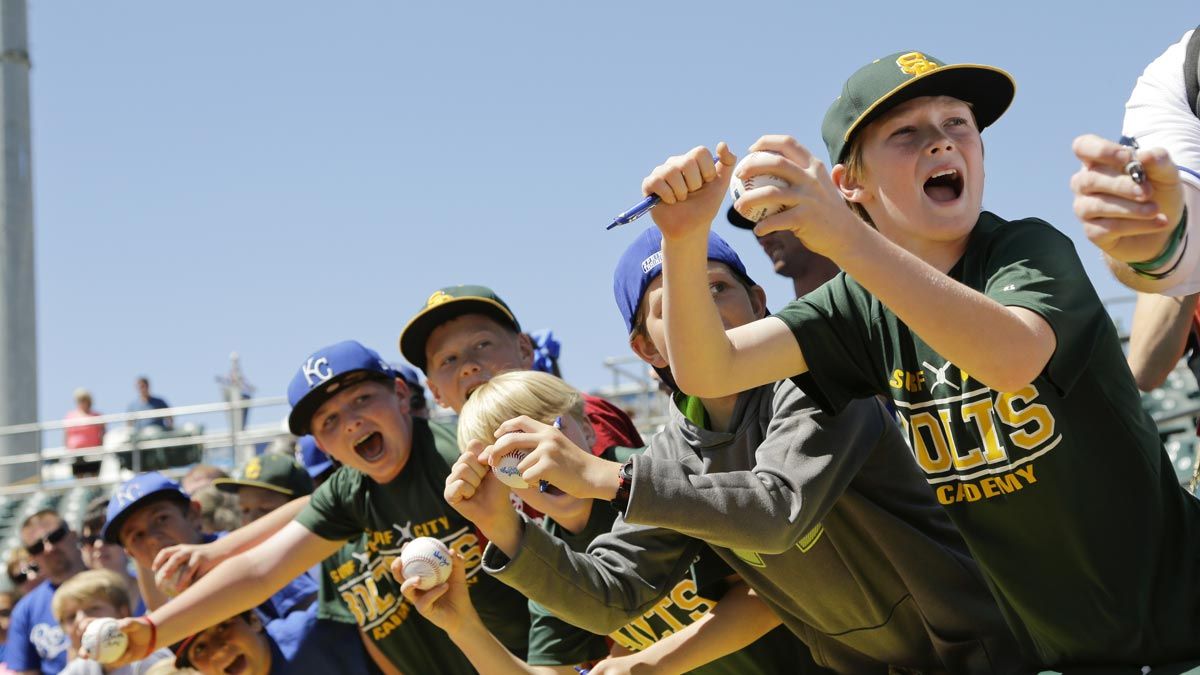 Young baseball fans scream to get autographs from Kansas City Royals players before the team's spring training baseball game against the Texas Rangers in Surprise, Arizona in this March 30, 2016, file photo.

Count her family among those who would pause before heading to the ballpark.

"For me personally, I'm not sure I would feel comfortable attending a live sporting event until there is a known treatment or widely available vaccine," Lucy said. "I trust the institutions to put the proper measures in place; however, making sure that they are enforced is another matter."

Many college and pro sports teams already were dealing with declining ticket sales. Watching at home or streaming games are factors, as is the changing social makeup of fan bases. Dynamic pricing, increases in parking and concession prices, and a push toward luxury seating have exacerbated the problem.

Major League Baseball attendance has declined six of the past seven seasons. In college football, 13 of the 130 schools that played in the Football Bowl Subdivision reported average crowd sizes of 50% or less last season. Even the NFL has seen an increase in empty seats despite its generally rock-solid popularity.

So as coronavirus concerns linger, how are teams going to lure fans back when stadiums do reopen?

Loyalty and engagement apps, widespread around the major leagues and colleges even before the pandemic, will become even more common and interactive as teams try to recapture lost revenue. There also will be more behind-the-scenes content and enhancements available via smartphones that will only be available to those in the stadium or arena, offering fans something unique over fans watching at home.

"Fans want that experience to be top-notch, period. That's why teams are thinking about this," said Britton Stackhouse Miller, senior vice president at Fortress US, a developer of engagement and integration systems with clients in European football, baseball, the NBA, NFL and NHL. 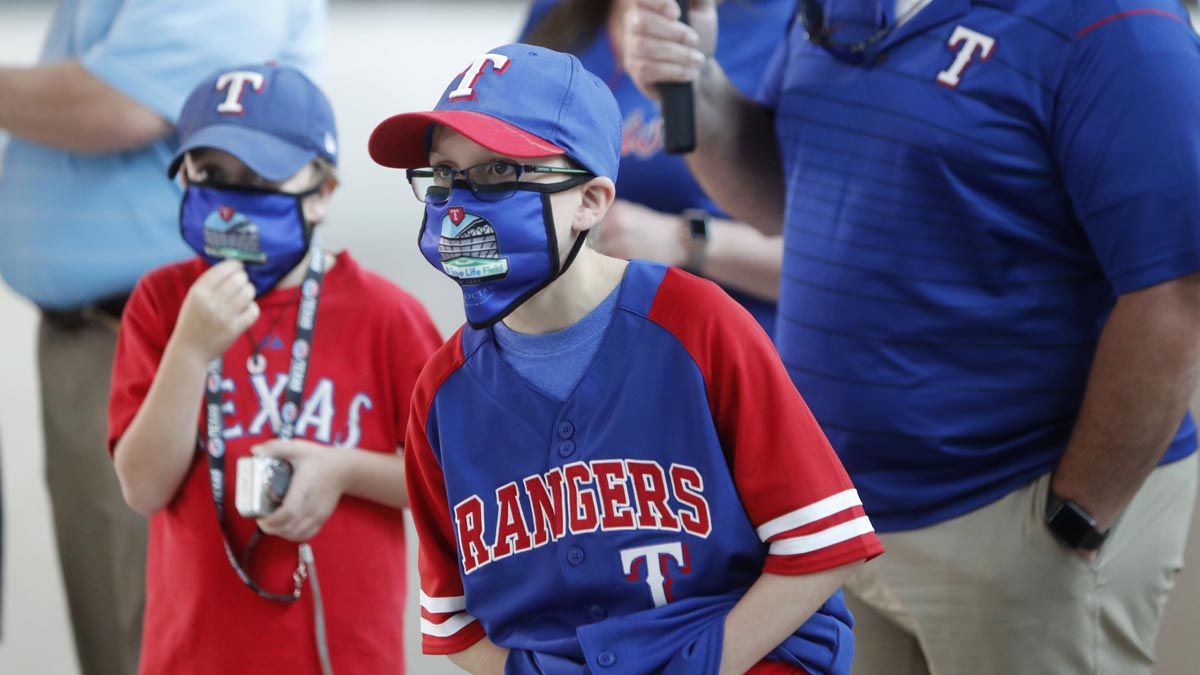 Temperature checks, hand sanitizer distribution stations and touchless vending will become the norm for a while. Even concessions will change, though one big difference — gulp — could lead to a lot of grumbling.

"If you don't sell beer the number of visits to the bathroom drops dramatically," said Marc Ganis, the director of sports consulting firm Sportscorp. "So for a time we may have to think about not selling beer."

It won't just be the vast oceans of bench seats left open, either. Many experts believe those hardy fans will be the first to return. It's the corporate suites from which many colleges and pro franchises derive so much of their gameday revenue that may end up being empty until long after games have resumed. Economic woes may last for some time.

For fans who stay home, leagues are looking for ways to keep them engaged, too.

When Germany's top football league returned without fans, broadcaster Sky knew it had a problem with silence coming through the TV. Engineers created "carpet audio" from previous games between the same teams, then teased out roars for specific events such as goals and red cards, giving those watching at home the option of a more realistic experience.

"This was the only idea that we thought could be most respectful to the fans," said Alessandro Reitano, vice president of sports production for Sky Deutschland. "To be honest, it's a major success."

Old crowd noise is a bit like an old game, though. It lacks a certain authenticity. So along came ChampTrack, which created an app that utilizes the microphones of fans. It captures their every roar and groan and sends the audio to its server, which then aggregates the noise into a single stream. That stream is then returned to the viewer using proprietary algorithms to provide the broadcast with real-time sound, which is then immediately erased to ensure personal privacy.

"Once they press play on our web app, they can hear what everyone else is cheering about and their own cheer," said ChampTrack chief executive Elias Anderson, adding the system could soon handle as many as 150,000 fans for each game. 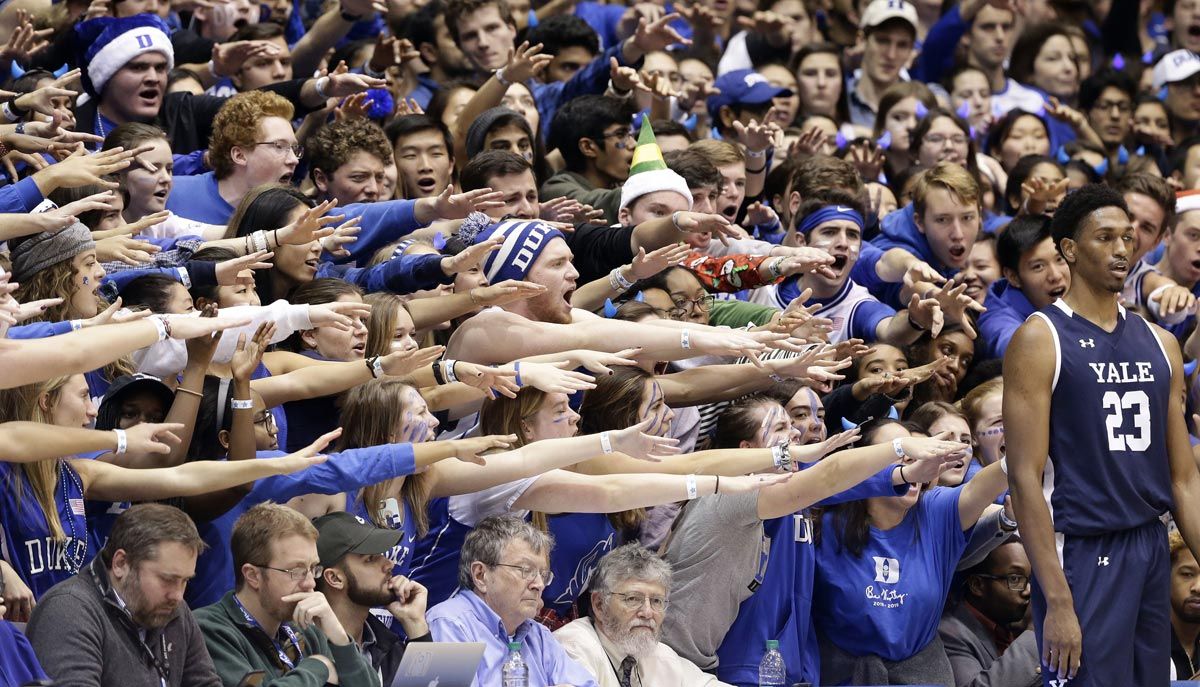 "When it was clear there would be no audience this season, the fans had the idea of bringing their images to the stadium," said Lubbo Popken, deputy press secretary for German football club Borussia Monchengladbach, which affixed fan likenesses to their seats. "We were surprised how many people wanted to be part of this idea and have their images in the stadium. It really changed the atmosphere in the empty stadium."

Of course, none of that is the same as having real fans creating real noise.