Yamaha Sales and Marketing Director Kaoru Ogura said they have high expectations given the strength of their roster.

"[We expect] to occupy all the podiums with Yamaha motorcycles," he said. "This is our biggest expectation. We will promote motorcycle culture thru racing. Team attitude should be good and they should be the best example of [a] motorcycle rider.”

“We believe they will be good ambassadors of the brand," added Yamaha section manager Ryan Jude Camus, explaining why theygave full support to these teams. "Nakikita niyo yung bumubuo ng team, not only do we get the greatest riders but we match them sa mga magagaling na team managers.”

Yamaha will compete in the Super Series of races, the IR Cup in Luzon, and the Regional Underground Grand Prix in Visayas and Mindanao.

Phoenix Yamaha KOSO Racing Team manager Mel Aquino, a former motocross rider in the 1990s, said part of their program is to teach young riders the basics of safety in and out of the track. He even points out someteam members who are 13 and 14 years old.

“Mas maaga pa lang matuturuan natin sila para maging responsible rider out on the streets. They can be role models for other riders at an early age,” said Aquino, who also holds off- and on-road clinics.

Meanwhile, Neil Labrador of MW 323 Racing Team is focused in the Visayas and Mindanao, on the lookout for aspirants who wish to try the fast-paced sport of circuit racing in the areas such as Cebu and Bukidnon and whose riders are open to teaching kids for free.

Charlie Ong of Yamaha Spec V Racing Team, on the other hand, said they educate riders who wish to run pro in the Palawan Racing Circuit with particular emphasis on the proper use of equipment and educate them not to race on the streets but on the race track.

When asked whether Yamaha will soon sponsor participation in endurance and super bike programs, Camus responded that some of their riders will indeed be in R3 and R1 supersport motorcycles.

“We’re still finalizing the details but definitely, it is well representation of Yamaha in all categories of the race track,” he said.

Aquino pointed out that the end goal here is to develop world-class riders who can bring pride to the country.

“Despite being competitors, nakita ko na nagtutulungan sila. Each of them share their knowledge para mag-develop sila. Yung competition level tumataas," he said.

"I am expecting the teams from Visayas and Mindanao to help us (in Luzon) with these kids para tumaas pa ang skill level so we can produce world-class champions here in the Philippines,” added Aquino who believes that with support from companies like Yamaha, the country can produce a rider to compete in the MotoGP, the most prestigious race in the world.

Yamaha also announced its partnership with Motoworld and the launch of its Big Bike Card. 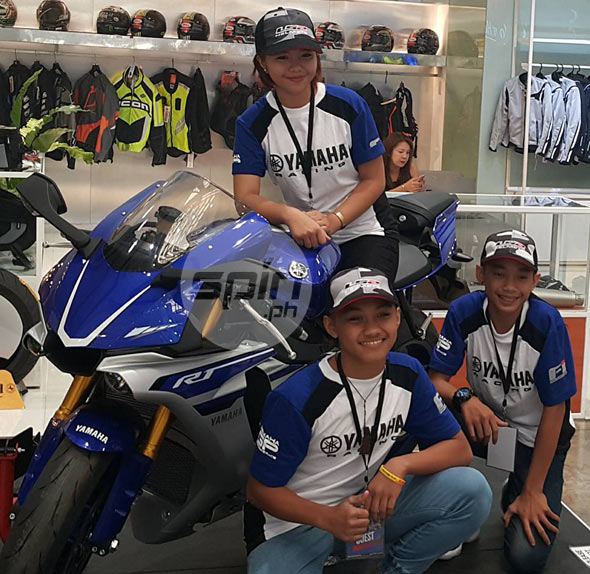