JACKSONVILLE, Florida — Kicks, punches and grunts echoed through the empty arena. Coaches, commentators and camera clicks resonated like never before. Blood, sweat, swollen eyelids and face masks signaled the return of UFC, the first major sporting event to resume since the coronavirus shuttered much of the country for nearly two months.

UFC 249 ushered in a new look for sports, too. One without fans and amid several safety precautions.

It was definitely different — two fighters adjusted their approaches because of what they heard announcers say — and a welcome reprieve for a sports-craved country that went nearly eight weeks without any live events.

Nearly five hours after President Trump congratulated UFC for restarting the sports world, Justin Gaethje stunned heavily favored Tony Ferguson (26-4) in the main event, earning a TKO in the fifth and final round of the headliner that was deemed an interim lightweight title bout. It essentially gives Gaethje (22-2) the right to fight titleholder Khabib Nurmagomedov next. Nurmagomedov was unable to fight this weekend because of travel restrictions. 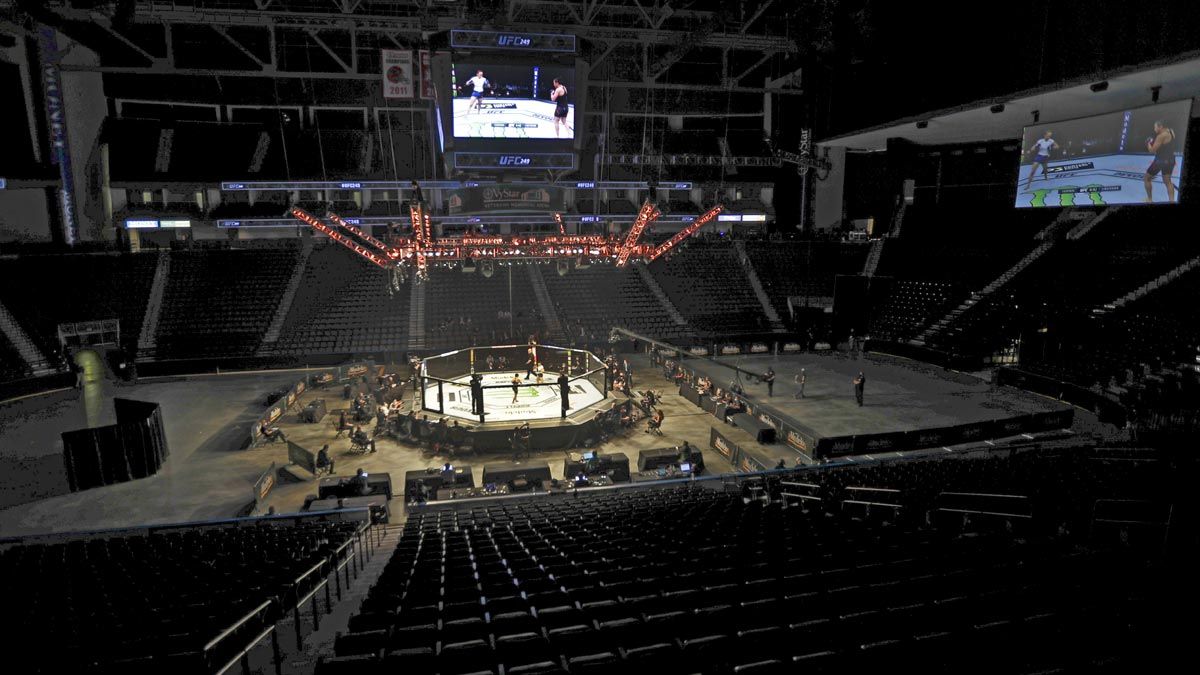 Gaethje flipped himself out of the octagon and back in after the victory and then screamed repeatedly.

"I want the real one," he said as he threw down the interim belt.

The stacked fight card saw 33-year-old Henry Cejudo, with blood gushing from his forehead and running down his chest, defend his bantamweight title against Dominick Cruz and then announce his retirement in the middle of the octagon. It also included heavyweight contender Francis Ngannou pummel another opponent, former NFL defensive end Greg Hardy, to win for the sixth time in eight fights and former welterweight champion and fan favorite Donald "Cowboy" Cerrone lose his fourth straight.

Trump was part of the event as well. His taped message was played during ESPN's broadcast of the undercard.

"I want to congratulate (UFC President) Dana White and the UFC," Trump said. "They're going to have a big match. We love it. We think it's important. Get the sports leagues back. Let's play. Do the social distancing and whatever else you have to do. We need sports. We want our sports back."

UFC 249 was originally scheduled for April 18 in New York, but was postponed in hopes of helping slow the spread of COVID-19.

The mixed martial arts behemoth will hold three shows in eight days in Jacksonville, where state officials deemed professional sports with a national audience exempt from a stay-at-home order as long as the location is closed to the public. 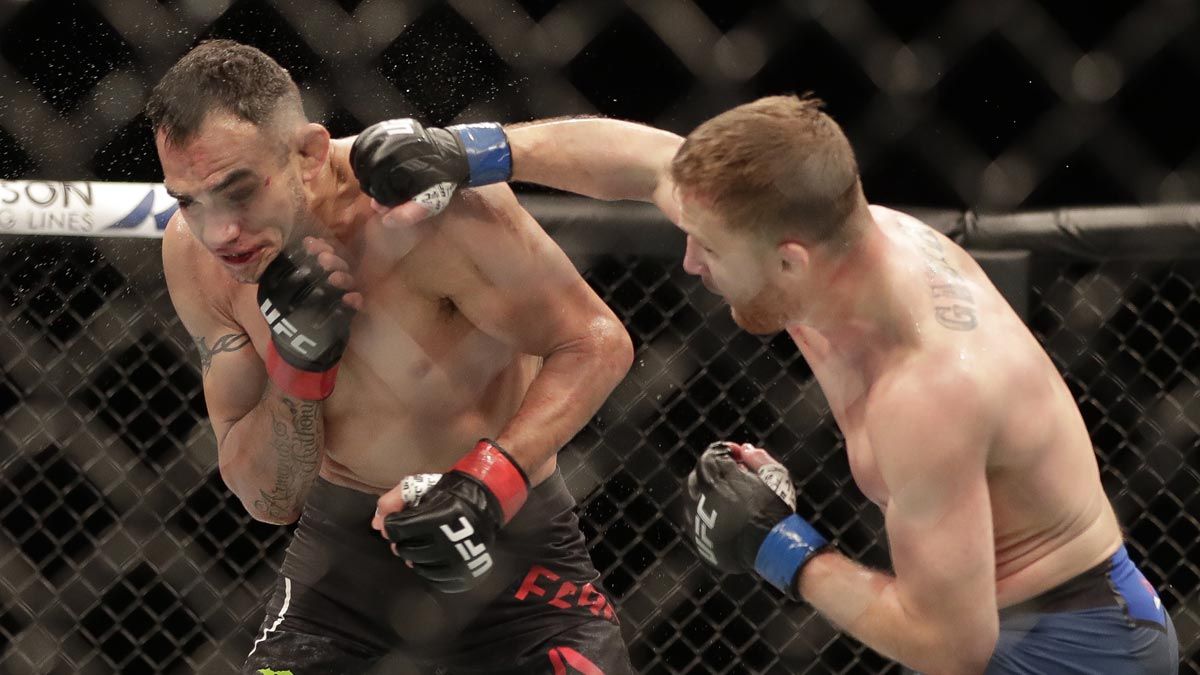 The UFC came up with a 25-page document to address health and safety protocols, procedures that led to Jacaré Souza testing positive for COVID-19 on Friday. His middleweight bout against Uriah Hall was canceled that night. Souza's two cornermen also tested as positive, the UFC said.

All three men left the host hotel to self-isolate elsewhere, where UFC's medical team will monitor their conditions remotely and provide assistance with necessary treatments.

The positive results surely increased the focus on the event. Every other sport is watching closely to see how it plays out.

White didn't want to postpone any fights. He tried to host the event on tribal land in California and still hopes to create a "Fight Island" for future cards.

He settled for Jacksonville for at least a week — without fans and with social-distancing rules in place.

Judges and broadcasters worked from separate tables. Fighters, trainers, referees, judges, UFC staff and even outside media had to undergo COVID-19 testing to get inside Veterans Memorial Arena. 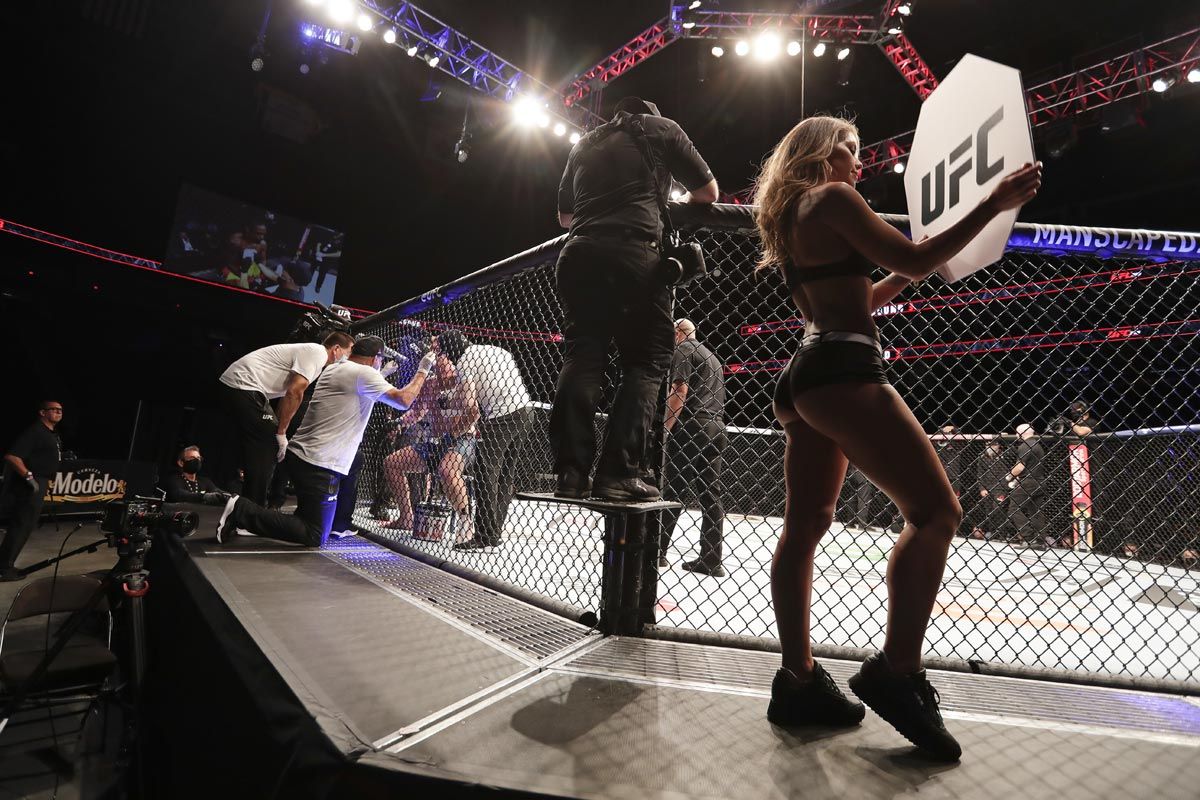 Many of those in attendance Saturday wore masks and gloves, although several were seemingly exempt from the mandate. Referees, ring announcer Bruce Buffer, other officials inside the octagon and the ring girl were unmasked. Play-by-play commentator Joe Rogan, who initially was supposed to interview winners remotely, ended up doing them inside the octagon.

The cage floor was disinfected between bouts, and the padded parts of the octagon were wiped down between rounds.

Without fans, though, sounds that usually would be muted or completely drowned out filled the desolate arena. Fighters said it affected their bouts. Hardy and Carla Esparza said they altered their approach after hearing commentators during early rounds.

"It's hard to assess without the crowd," Anthony Pettis said after beating Cerrone in a wild welterweight fight. "When I land stuff, I hear the crowd and know it was a good one. This time, there was no crowd. I saw his head pop, but there was nothing behind it, so it's hard to tell."