LAS VEGAS — Former UFC champion Jon Jones was jailed in Las Vegas early on Friday (Saturday, Manila time) after an incident at Caesars Palace that police said led to his arrest on charges of domestic battery and damaging a vehicle.

Details of the incident that led to Jones' 5:45 a.m. arrest at the Las Vegas Strip resort were not immediately made public by Las Vegas police.

Jail and court records showed Jonathan Dwight Jones, 34, posted $8,000 bail and was due for an initial court appearance Saturday, with an Oct. 26 date for prosecutors to file criminal charges. The domestic battery charge is a misdemeanor. The vehicle charge is a felony, with damage reported at more than $5,000.

It was not immediately clear if Jones had an attorney.

"JacksonWink Academy is aware of the allegations and is conducting its own review of the matter. It would be inappropriate to comment further at this time," said James Hallinan, a spokesman for the Albuquerque, New Mexico, gym where Jones trained.

Jones lives in Albuquerque, but he attended a Thursday night UFC Hall of Fame induction ceremony at the Park MGM hotel honoring his 2013 fight with Alexander Gustafsson.

Jones (26-1, 1 no-contest) had three separate stints as the UFC's light heavyweight champion from 2011 to 2020, and he is widely considered one of the greatest fighters in MMA history.

But his UFC career has been defined more by misbehavior outside the cage than his excellence in it. 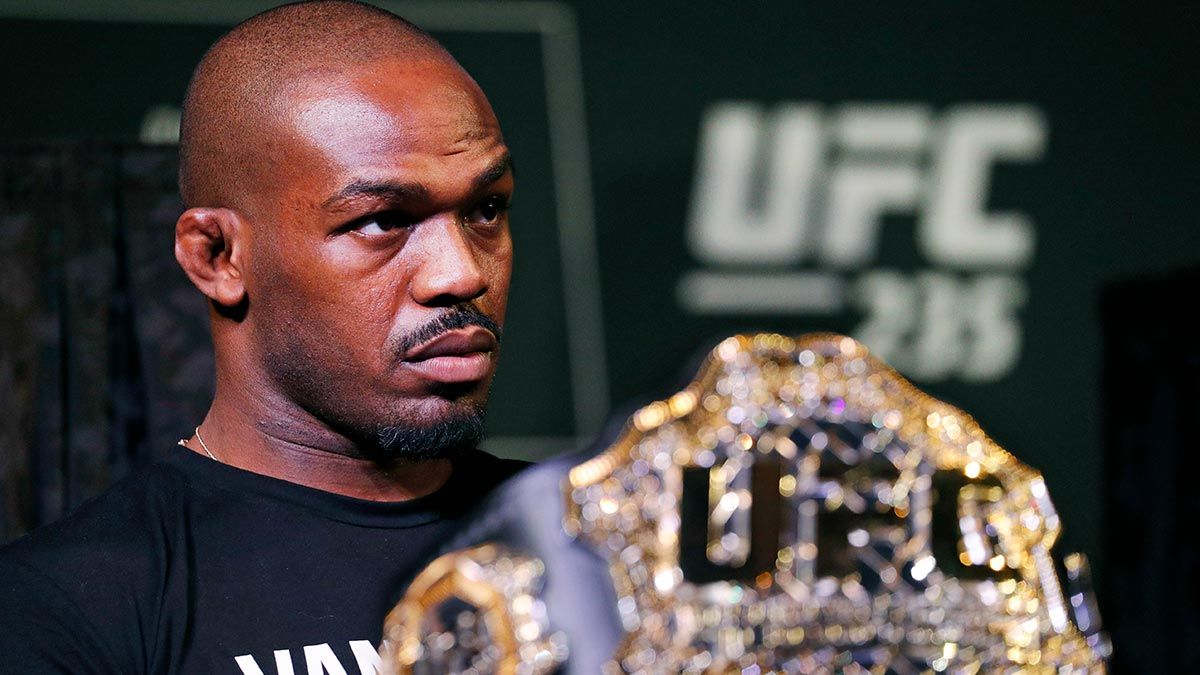 In 2012, a year after becoming the youngest champion in UFC history, Jones was arrested for DUI after crashing his Bentley into a telephone pole in upstate Binghamton, New York.

Jones then lost his title in 2015 when he was arrested and charged with a felony stemming from a hit-and-run accident in New Mexico in which he broke a pregnant driver's arm.

Jones pleaded no contest to disorderly conduct in 2019 after an incident with a waitress at a strip club in Albuquerque, and he was arrested last year in Albuquerque on charges of aggravated driving under the influence and negligent use of a firearm.

He was forced out of a fight with Daniel Cormier at UFC 200 in 2016 after testing positive for two banned substances that he blamed on a sexual enhancement pill.

He then tested positive for an anabolic steroid in 2017, prompting the UFC to strip his light heavyweight title for a second time. The California State Athletic Commission overturned the result of his victory over Cormier at UFC 214, and Jones received a 15-month competitive suspension.

Because of his arrests, suspensions and various disputes with the UFC, Jones has fought only eight times in the last eight years during the ostensible prime of his career. He hasn't fought since beating Dominick Reyes in February 2020 for his fourth consecutive victory.

Jones relinquished the light heavyweight title last year and declared his intention to move up to heavyweight. He told reporters Thursday night he wants to weigh 270 pounds when he makes his heavyweight debut, hopefully next spring.