Conor-Khabib melee poses question: 'Is this UFC or WWE?'

LAS VEGAS — Khabib Nurmagomedov apologized, though it was clear he wasn't sorry about much.

Not after putting a beating on Conor McGregor in their highly anticipated fight. Not after leaping out of the octagon to settle another score while a couple of his thugs jumped in to deliver a few more blows to McGregor's head.

And certainly not after getting a call from Vladimir Putin offering congratulations for a job well done.

Fighting means never having to say you're sorry, especially if you're doing it in the UFC. Nothing seems to be off limits, whether it's a dive out of the octagon or an attack with a hand truck on a bus.

UFC or WWE? About the only thing missing on Saturday night (Sunday, Manila time) on the Las Vegas Strip was a script and some folding chairs for Nurmagomedov to smash over the heads of his tormentors.

Sadly, it was all too predictable. So, too, will be the punishment for the fight after the fight.

If you didn't get any bets down on the fight itself, here's something you can bet on: Nevada's fight officials will get together sometime soon and hand down a fine and suspension to the Russian for the melee that broke out after his win over McGregor.

There will be some stern warnings issued, some promises extracted that it won't happen again. Nurmagomedov might even offer a more believable apology.

And then there will be the rematch that will make even more millions of dollars for everyone involved.

Oh, and here's another prediction: UFC fans will eat it all up.

Remember that the biggest fight in the history of UFC became that only after McGregor launched a criminal attack on a bus containing Nurmagomedov and others in Brooklyn, then followed it with a verbal attack on his opponent's nationality and religion.

It became that only after UFC chief Dana White embraced the bus attack and used video of it in ads to sell what he says will be a record number of pay-per-views to fans eager to see even more.

Blame Nurmagomedov for his extracurricular action, yes. People were put in danger when he vaulted from the octagon, including Nevada's governor, who White claimed was last seen running from the arena.

But most of the blame should be put directly on White and UFC's new owners for promoting — and profiting from — both a criminal act and trash talk that should be outside any sport — even in a sport that seems to have no standards.

It was White, you might remember, who expressed outrage in Brooklyn in April when McGregor took a hand truck and smashed the window of the bus carrying Nurmagomedov and others. The rampage, White said at the time, was "the most disgusting thing that has ever happened in the history of the (UFC)."

But there were no real consequences for McGregor, other than a brief trip to jail and a court appearance. Certainly no suspension by the UFC, which badly needs its only remaining big star to sell pay-per-views and keep investors happy.

A few months later, White was using video from the incident to promote the fight. And a few days before the fight, he stood smiling as McGregor spouted a bizarre conspiracy theory about the Russian's manager and the 9/11 terrorist attacks and then vowed to put a hole in Nurmagomedov's skull. 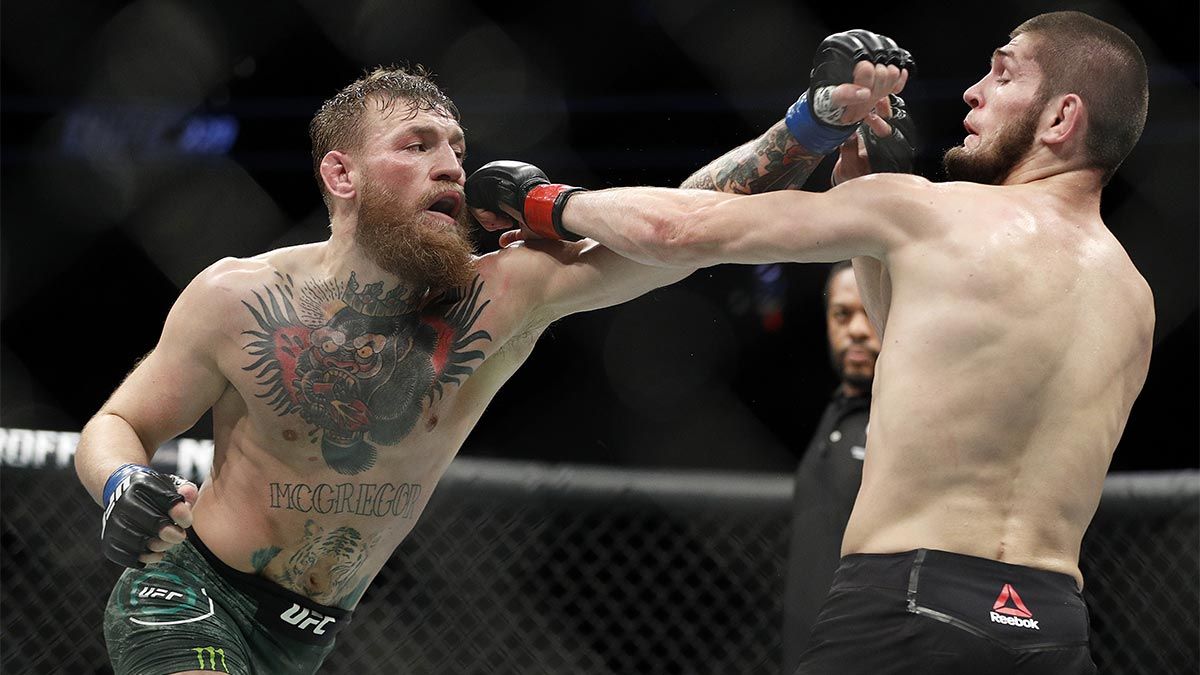 It was clown behavior, but this is a sport that rewards clown behavior. And that's why both fighters stand to make even bigger money the next time they meet in the cage, something McGregor was already calling for just hours after his loss.

"Good knock," McGregor tweeted after tapping out in the fourth around. "Looking forward to the rematch."

That there will be a rematch is a foregone conclusion. And don't be surprised if it is promoted with shots of the melee, much like Saturday night's fight was promoted with video of McGregor going crazy in Brooklyn.

This despite White's claim that it was all some sort of aberration.

So spare us any fake outrage. Don't try to pretend nobody could have seen this coming.

Just get on with selling the next one.