Nick Diaz also lost his first mixed martial arts fight in nearly seven years, declining to go on after Robbie Lawler knocked him down with punches early in the third round at T-Mobile Arena.

Volkanovski (23-1) dominated the scorecards — 49-46, 50-45 and 50-44 — in his 20th consecutive victory, but the Australian still had to survive an extraordinary challenge from the relentless Ortega (15-2), who didn't quit despite a bloodied face and a clearly damaged nose. Volkanovski survived a spectacular third round in which both fighters appeared to be moments from finishing the other.

"I thought I was in his head, and then he came back even stronger," Volkanovski said. "Credit to him. ... It's just preparation. I'm a normal human being. Hard work got me to where I am. Everyone can do what I've done."

Volkanovski largely controlled the first two rounds with his usual impressive work rate and striking, but a bloodied Ortega knocked him down dramatically with a left hand in the third round.

Ortega pounced and nearly finished the champ with a guillotine choke, but Volkanovski willed his way out of it and got back on top — only for Ortega to escape and to trap Volkanovski in a triangle choke that the champ also barely escaped.

Ortega was allowed to continue after a visit from the ringside doctor despite his apparently broken nose. In the fourth, Ortega got another takedown and nearly landed another choke, but Volkanovski gave a thumbs-up to the referee before escaping and finishing the round raining blows down on a prone Ortega, whose face was bloodied again.

Volkanovski finished the fifth round strong, and both fighters received multiple standing ovations.

"I thought he was done," Ortega said. "I was trying to go for his head, but he's tough as hell. I tried to finish him. I heard him gargling, but he slipped out. He's the champ for a reason." 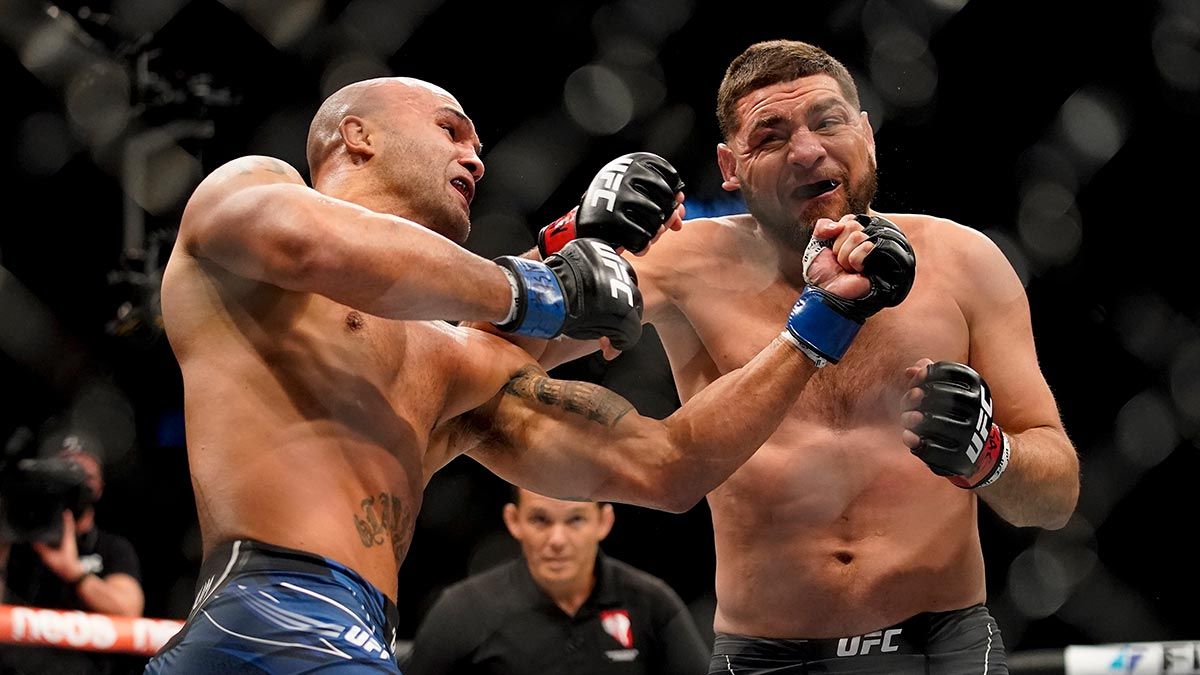 Shevchenko (22-3) cemented her status as one of MMA's most dominant champions with her eighth consecutive victory over the last four years, including six stoppages. The champion from Kyrgyzstan steadily wore down Murphy (15-5) over the first three rounds before stunning Murphy with a right hook and then battering her across the cage and onto the canvas, where she finished with punches and elbows on the ground.

The 38-year-old Murphy had won five straight bouts since July 2018 to earn the first UFC title shot of her late-blooming MMA career. Yet she was little more than a tough sparring match for Shevchenko, who hasn't lost to anyone in the past 11 years, except two-belt champion Amanda Nunes.

The raucous Vegas crowd cheered the loudest for Diaz (26-10), a wildly popular 38-year-old fighter who walked away from the sport in early 2015.

In his return, Diaz traded a high volume of strikes with Lawler (29-15) for two exciting rounds during his return at T-Mobile Arena. But Diaz then crumpled awkwardly to his knees after Lawler caught him with a check right hook early in the third.

Diaz rolled onto his back when Lawler hit him again with a left hand, but Lawler declined to go to the ground with Diaz, instead gesturing at him to get up. The referee then spoke to Diaz, who indicated he wouldn't or couldn't go on 44 seconds into the third round.

Afterward, Diaz disclosed he might have injured his knee, but made no excuses or apologies for his performance in his return.

The 39-year-old Lawler ended his own four-fight losing streak by winning the rematch of these MMA pioneers' famed 2004 meeting at UFC 47. Diaz stopped Lawler in that bout for one of his most memorable victories.

Lawler appeared to be much sharper in the rematch than Diaz, who finally found a striking rhythm late in the first round before tiring in the second.

"It was a fun fight, and that's the stuff I like to do," Lawler said.

Diaz is a former Strikeforce welterweight champion and a beloved MMA iconoclast who competed in some of the most memorable bouts of the 2000s before walking away from the sport after his loss in January 2015 to Anderson Silva, his third straight defeat.

Diaz still claims he doesn't enjoy MMA competition, and he backed up his words by refusing the UFC's lucrative offers for six years. His absence only boosted his popularity among fans who adore his antiauthoritarian attitudes and tough-guy image.

Lawler is also a veteran with a decorated career, including a stint as the UFC's welterweight champion from 2014-16. Lawler had faded in recent years, losing five of six bouts heading into this rematch with Diaz.