The story of golfer Bill Shaw, who founded Wack Wack golf club to stand up to racism

(Esquire Philippines) Shaw Boulevard is a major thoroughfare at the heart of Metro Manila. It runs across EDSA, and is just as old as EDSA itself. It runs from Kalentong Street in Mandaluyong City to Barangay Bagong Ilog in Pasig City.

But prior to becoming known as Shaw Boulevard, the road was named Jose Rizal Boulevard. It was the Americans who named this boulevard. Sometime in the 1940s, the name was once again changed to Shaw Boulevard in honor of William "Bill" James Shaw, an American philanthropist and avid golfer.

Who is William "Bill" James Shaw?

Who is Bill Shaw and why was Shaw Boulevard named after him? You can find the answer when you go to the Wack-Wack Golf and Country Club, which was founded by Shaw in 1930. There, a golden bust erected in his honor stands to this day.

Below the bust, a historical marker is placed. The marker reads:

In Memory of William "Bill" James Shaw, born in Barnet, Vermont, U.S.A., September 20, 1877, died in Caloocan, Rizal, March 1, 1939. Founder, organizer, and first president of Wack Wack Golf and Country Club — "A trysting place of the nations temporarily residing in these islands." Self-made philanthropist, fosterer of the spirit of democracy, a true friend, and a believer of goodwill amongst all people. 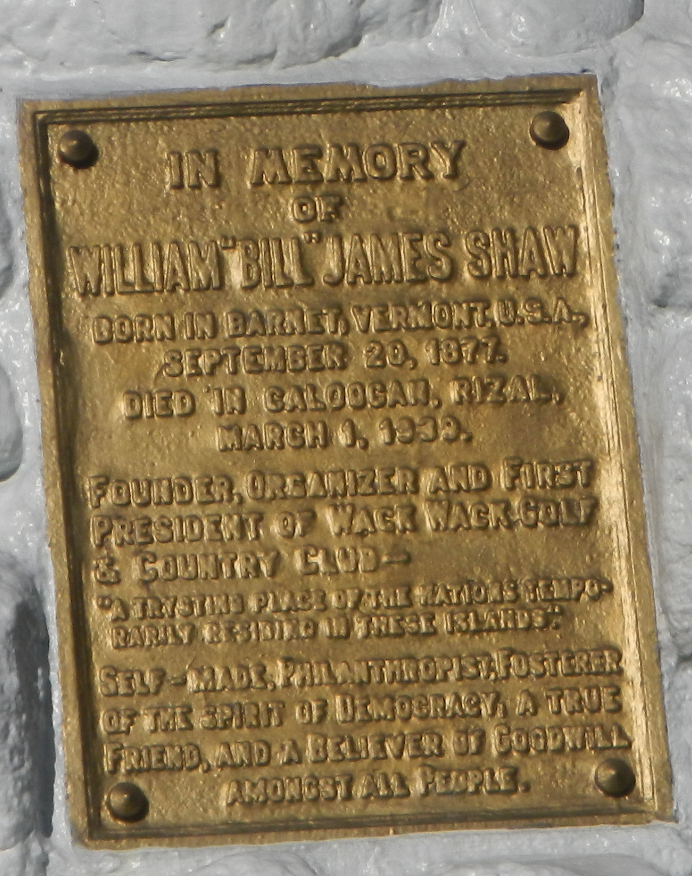 He established himself as one of the prominent Americans in the city: he became part-owner of Atlantic, Gulf & Pacific, which is now known as AG&P. Shaw was also the president of the Rotary Club of Manila from 1925 to 1926.

One of the reasons Shaw founded the Wack Wack Golf and Country Club was because he was disgusted by the gatekeepers at the iconic Manila Golf Club, which was then located in Caloocan.

According to historian Lewis Edward Gleeck, Jr., it all started when former caddie Larry Montes, won the 1929 Philippine Open Tournament at the Manila Golf Club, of which Shaw was a member.

Montes' victory did not sit well with some of the members of the club, so they decided to shut him out at the traditional post-tournament celebration attended by the participants. They asked Montes to leave the celebrations because there was ana alleged rule that bars caddies from entering the Manila Golf Club. Shaw saw it for what it was: discrimination.

Disgusted, Shaw quit the club and put up his own, which he named Wack Wack Golf and Country Club.

Today, Bill Shaw is remembered for his great love of sport and how it should transcend race, culture, and boundaries. Shaw Boulevard was named in his honor, as well as the William J. Shaw Theater in Greenbelt 1.

Of course, Wack Wack Golf and Country Club still holds a tournament named after its founder. The latest one — held last January 29 — was the 31st edition of the club's event. Hole-in-one prizes included a Mercedes-Benz GLC 200, a Jeep Renegade, and a Lexus UX 200 F-Sport.

This story originally appeared on Esquiremag.ph. Minor edits have been made by the SPIN.ph editors.