SOTY: Team Pilipinas is SPIN.ph's undisputed Sportsman of the Year

WE win as one.

Living up to the mantra of the 30th Southeast Asian Games, the 1,115-strong Team Philippines delivered one of the proudest moments in local sports history when it reclaimed the overall championship of the region’s biggest sporting meet. 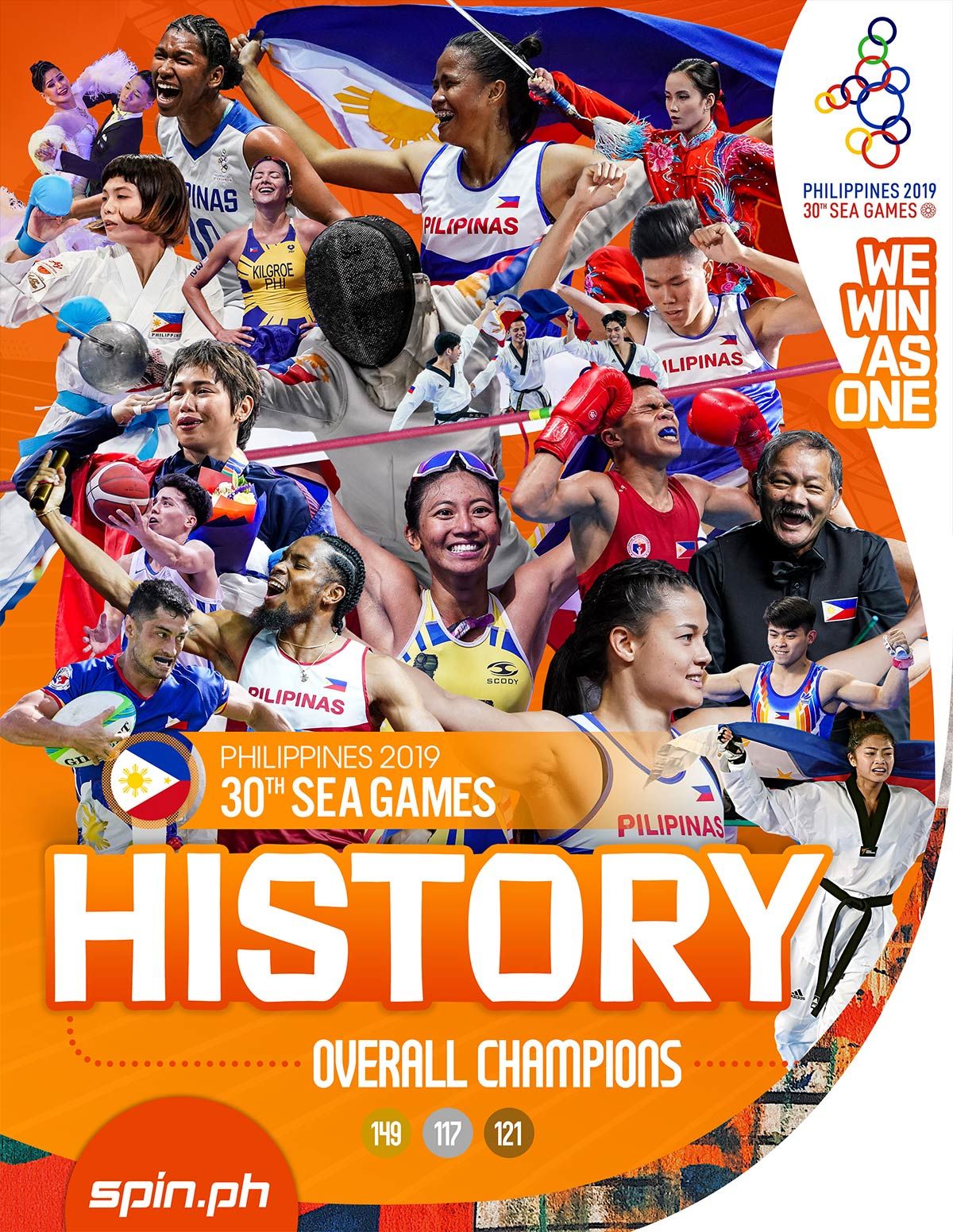 With a hometown crowd cheering them on from all fronts, the Filipino bets stamped their class in the country’s first staging of the event in 14 years.

The host bagged a record haul of 149 gold, 117 silver, and 121 bronze medals to emerge the runaway winner when the smoke of battle cleared after 11 days of competitions in the biggest SEA Games ever that featured a total of 56 events.

The numbers easily topped the 113 gold, 85 silver, and 93 bronze medals the Philippines collected in 2005 when it won the overall title of the biennial meet for the first time ever.

It was a scenario that appeared unlikely weeks – even days – leading up to the meet as Philippine SEA Games Organizing Committee (Phisgoc) faced a slew of concerns despite the staggering P6 billion budget allotted by the government for the hosting of the event.

Even the Games cauldron, infamously tagged "golden caldero" by netizens, became a controversial fixture in the news cycle as it was revealed the organizers had shelled out a whopping P50 million for its construction alone.

Then again, leave it all to the Filipino athletes to stand up and deliver when the going gets tough. 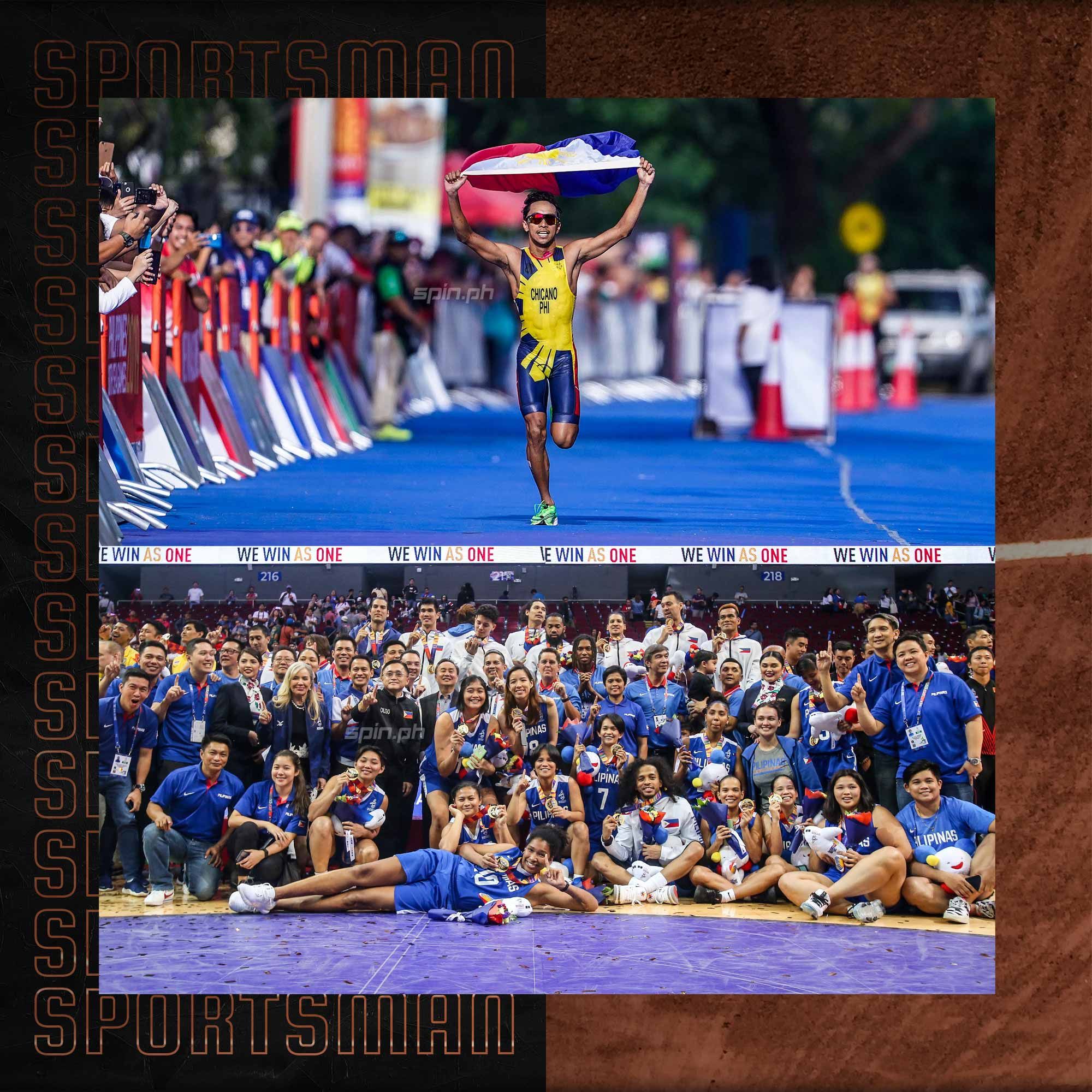 Setting aside distractions, Team Philippines battled without let up — from the time triathlete Rambo Chicano punched in the country’s first ever gold medal all the way to when Gilas Pilipinas’ put the final touches to the country’s remarkable campaign with its all-important men’s basketball gold medal win.

For its resiliency and ability to rise above greater odds, Team Philippines gained the nod of the entire SPIN.ph staff as the 2019 Sportsman of the Year.

Just about everybody did its part.

Dancesport sustained what Rambo started, getting the ball rolling for the host after winning 10 of the 12 golds at stake right on opening day of action.

Things got more glittering from there. 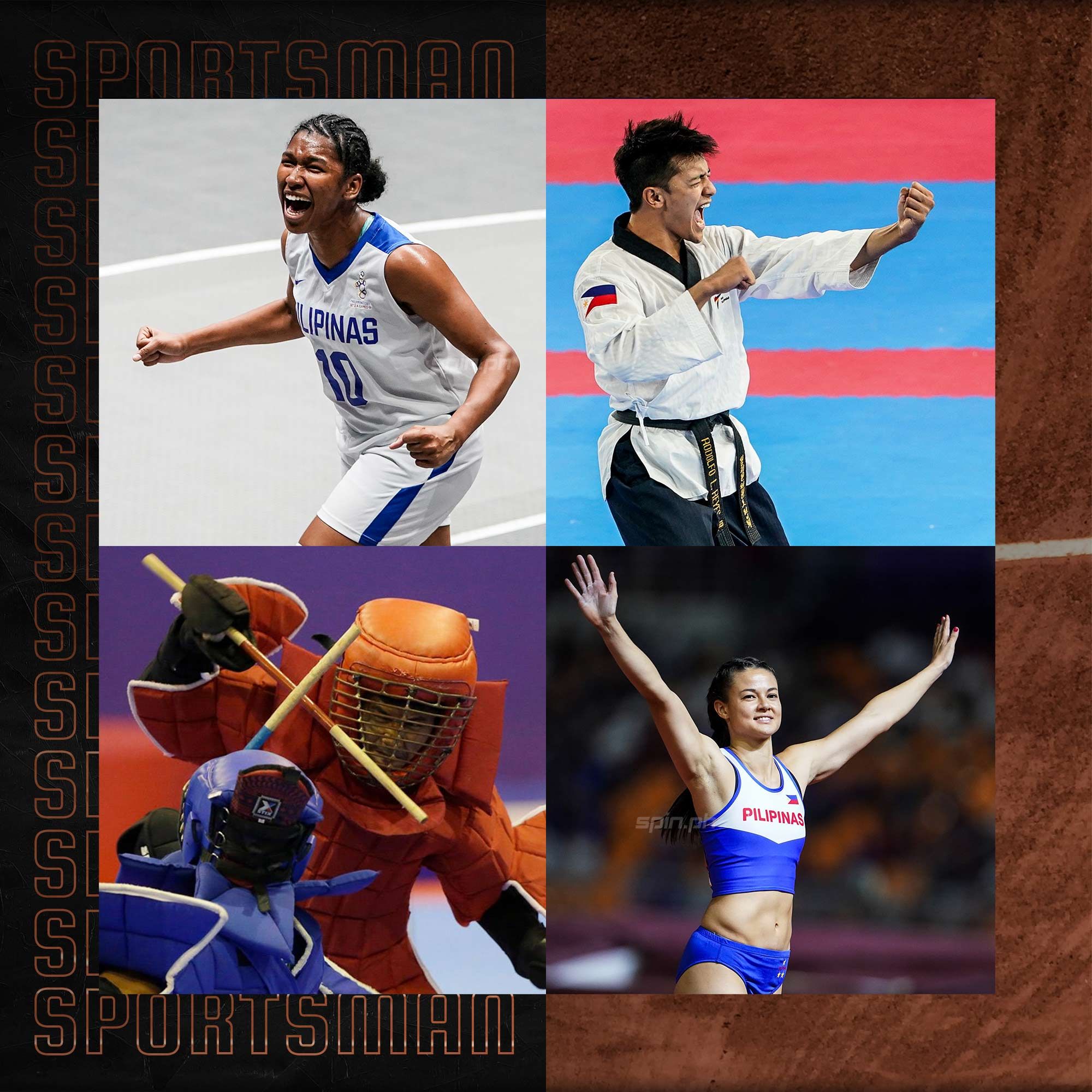 Fourteen years after it first made its way to the SEA Games calendar of events, arnis produced the same number of golds (14) to emerge as the biggest gold provider for Team Philippines.

Then the "usual suspects" did their thing led by athletics which delivered 11 golds, topped by record-breaking performances of pole vaulters Ernest John Obiena and Natalie Uy, and sprinter Kristina Knott in the women’s 200-meter dash.

Taekwondo kicked its way into an eight-gold harvest, boxing and wushu came through with seven golds each, and skateboarding and obstacle course each had six golds in a rousing meet debut.

Of course, a SEA Games celebration would be incomplete without a victory in basketball for this hoop-crazy nation, with the Filipino cagers sweeping all four golds at stake, including the inaugural 3x3 men and women’s competitions.

Naturally, the triumph was a star-studded spectacle. 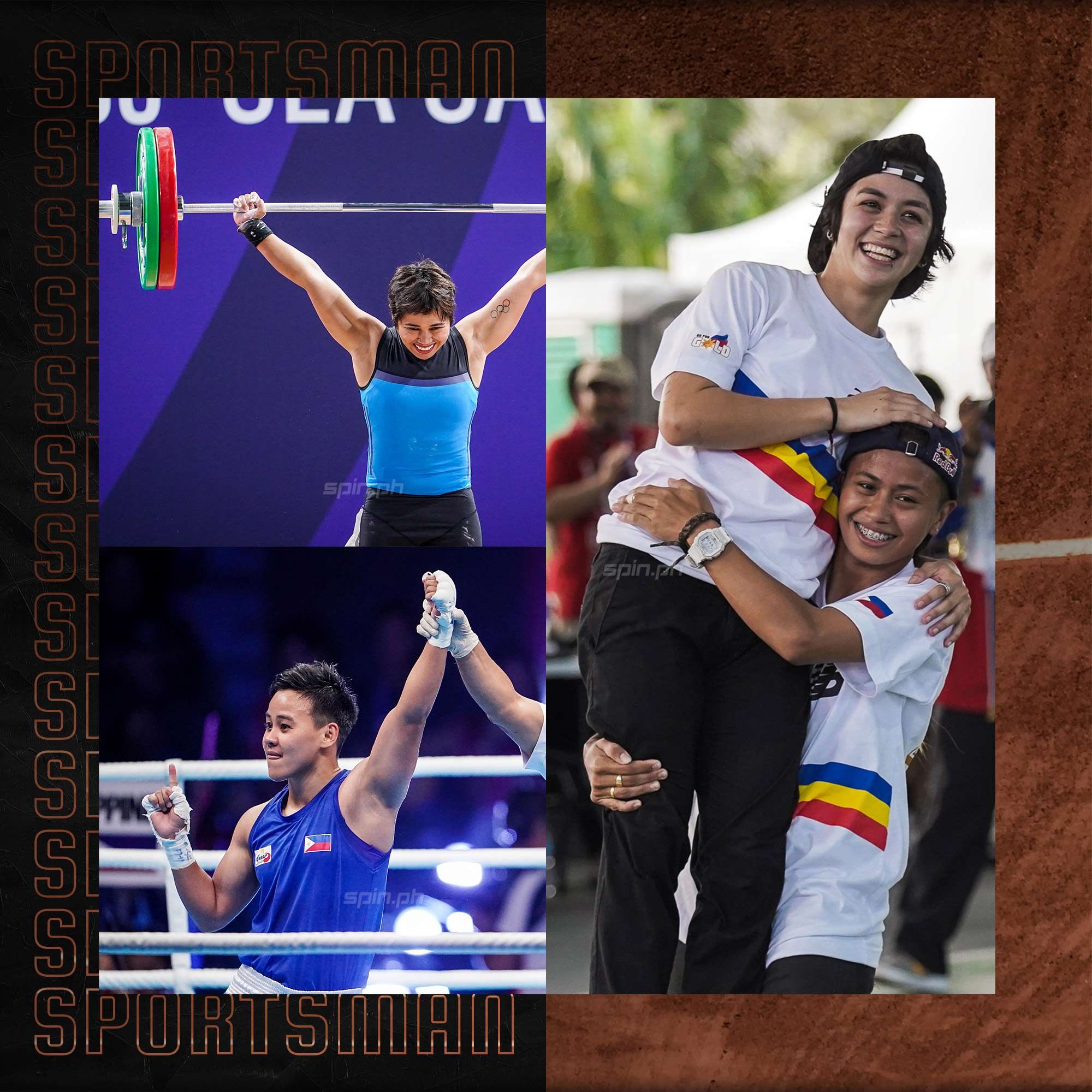 Carlos Yulo served as the face of gymnastics after winning two gold and five silver medals in a dominant performance that came two months after becoming the first Filipino — and the first from Southeast Asia — to win a gold in the World Artistic Gymnastics Championships in Stuttgart, Germany, earning an outright berth in the Tokyo Olympics.

There were inspiring stories as well. 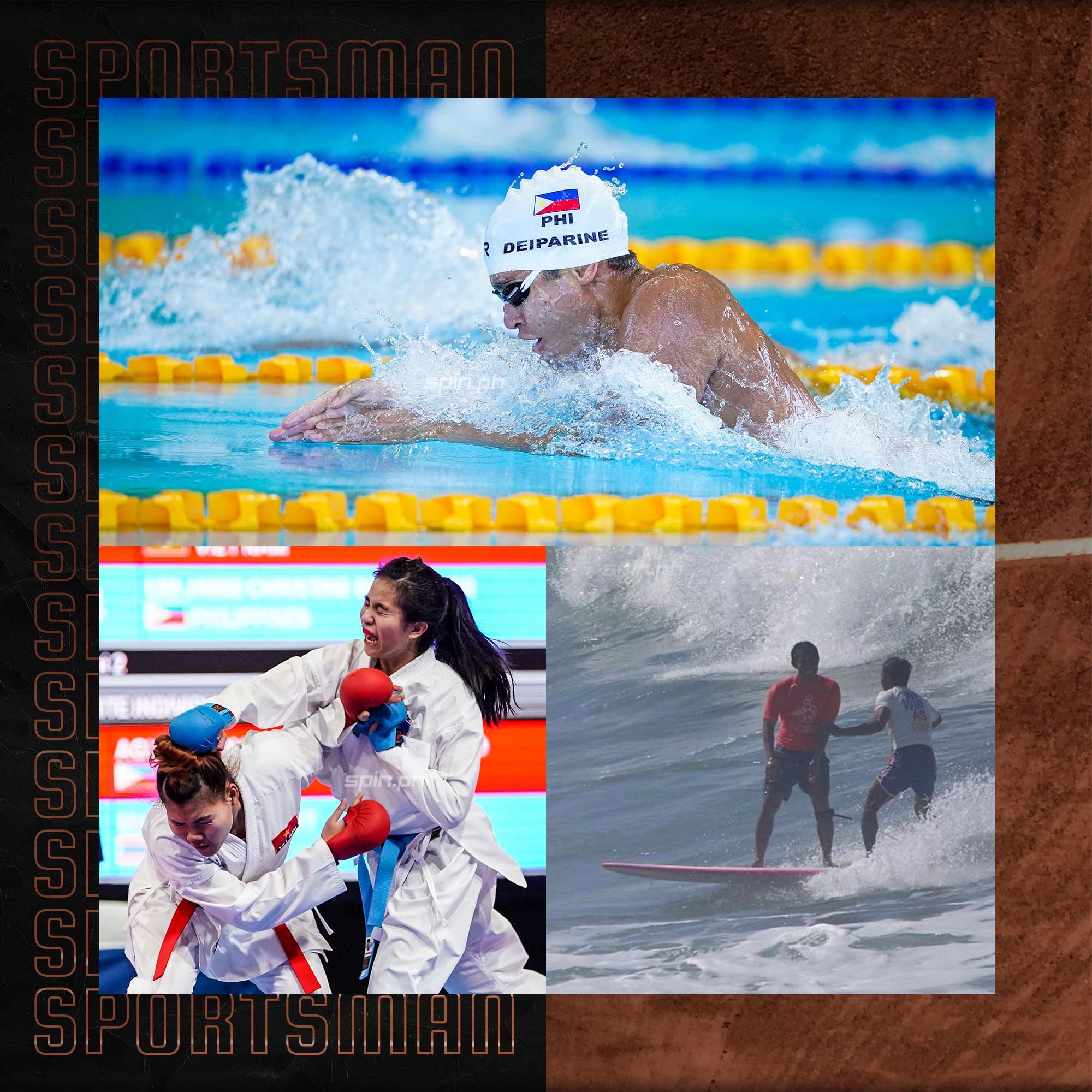 Roger Casugay copped a gold in surfing, but earned universal praise for saving Indonesian competitor Arip Nurhidayat from drowning even if it meant giving up the chance at winning a gold medal.

Jamie Christine Lim plucked a gold in karatedo, which she later dedicated to his celebrated dad Avelino ‘Samboy’ Lim in a touching gesture that warmed the hearts.

James Deipairine ended the country’s gold medal drought in medal-rich swimming, ruling the men’s 100-meter breaststroke in record-breaking time. It was the first gold by a Filipino tanker in the biennial meet since 2007.

Teener Daniela Reggie Dela Pisa, an ovarian cancer survivor, accounted for the other gold medal in gymnastics outside of Caloy Yulo.

After decades of frustrations and near-misses, the Gilas Pilipinas women’s team finally scored a breakthrough gold in basketball following a sweep of the tournament, highlighted by a 91-71 rout of perennial rival Thailand on the final day of the meet.

Its SEA Games stint in peril after being left with no venue to play, a highly motivated squash squad proved it belonged, grabbing its first ever gold after topping the mixed team event. 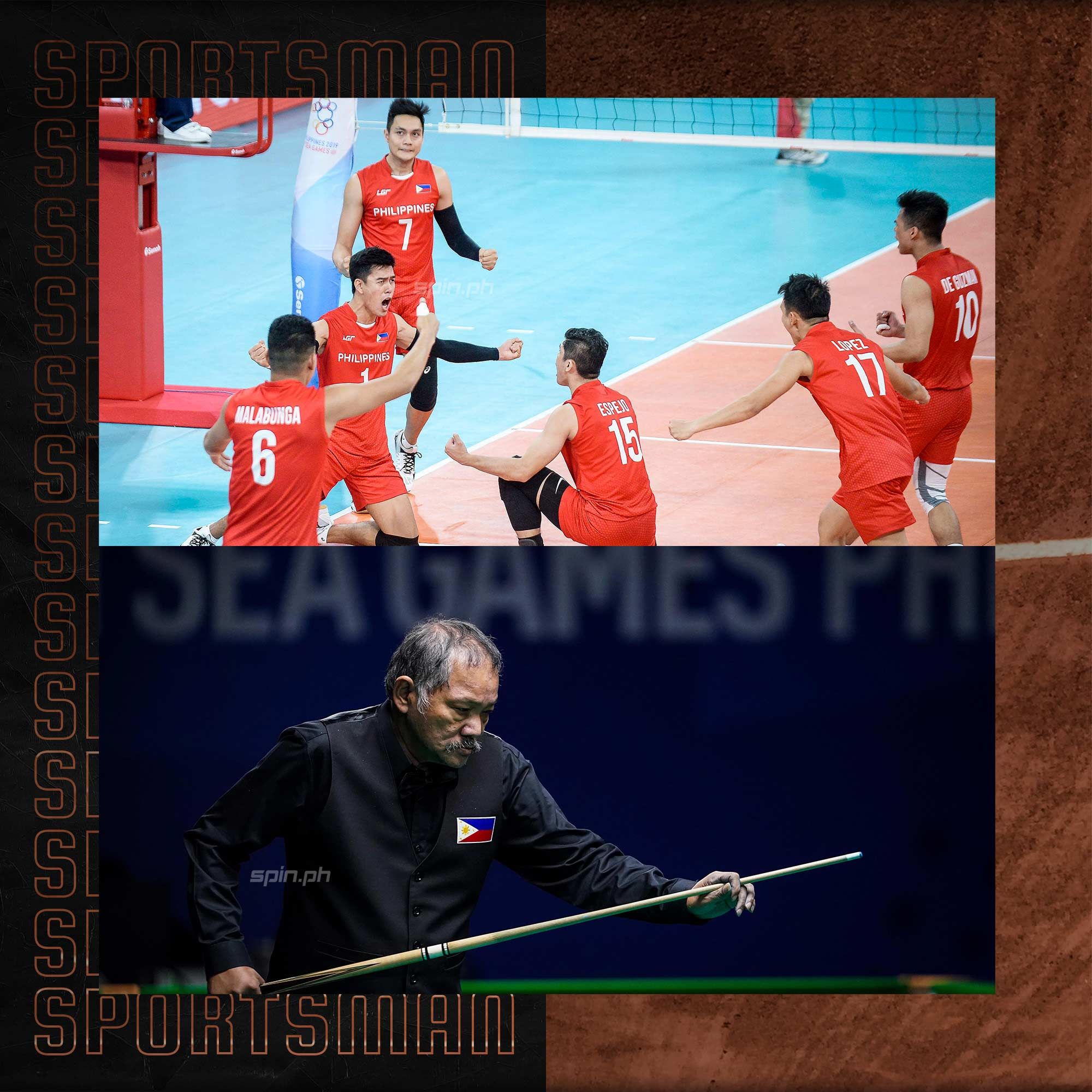 The men’s volleyball team and the legendary Efren ‘Bata’ Reyes fell short of reaching the top, but the medals they've won felt like gold medals, too.

Playing under the shadow of their more popular counterparts for longest time, the gritty Filipino spikers got their acts together and delivered a victory to remember, repulsing defending champion Thailand in a dramatic five-set thriller in the semis to advance to the gold medal round for the first time in 42 years. They eventually settled for the silver, losing to Indonesia in the finals. 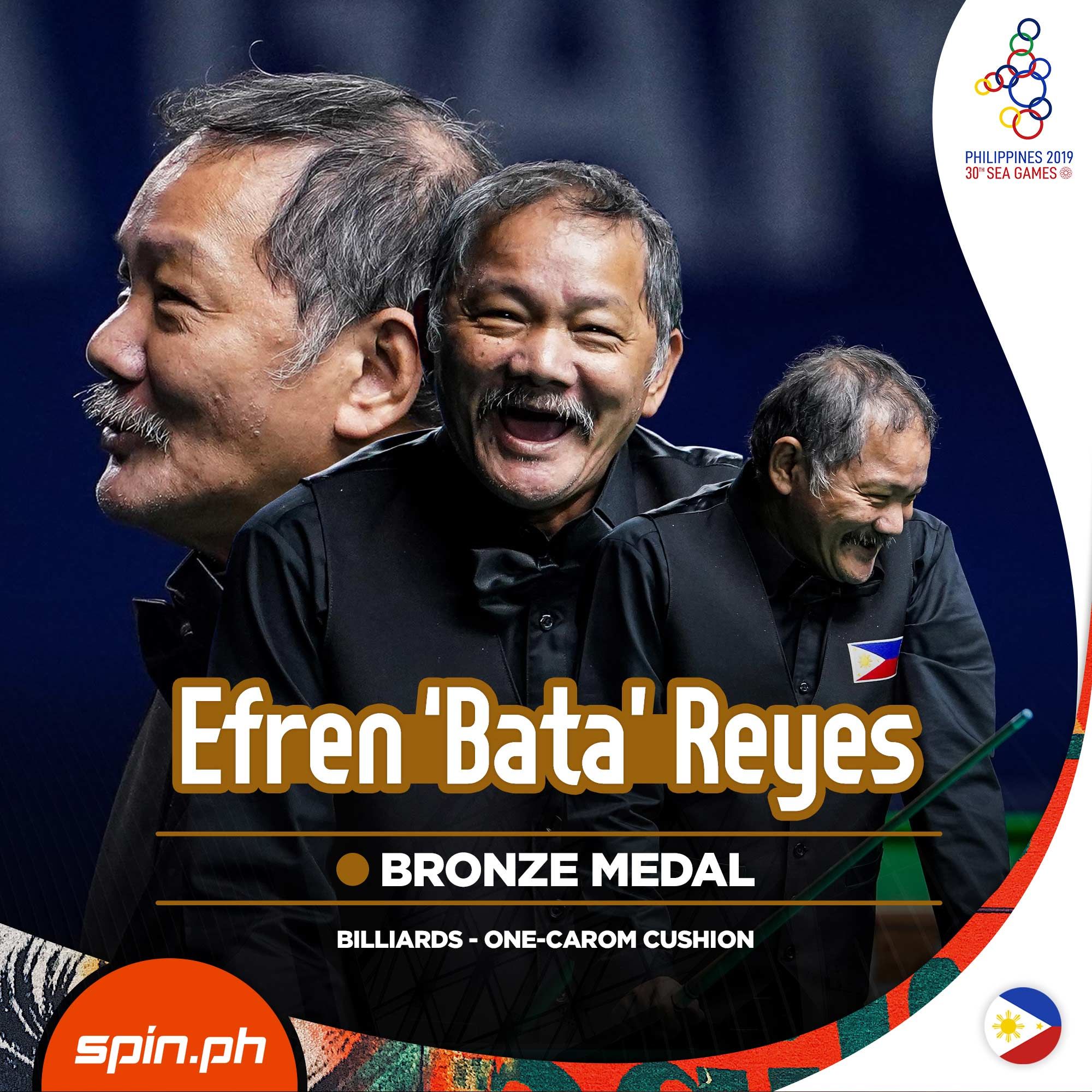 Now just a shadow of his old deadly self, Reyes remained as popular as ever despite his fading eyesight at age 65. The Hall of Famer only settled for the bronze medal in the 1-carom cushion, but in an ultimate show of respect, his tormentor who went on to bag the gold medal, Dinh Nai Ngo of Vietnam, asked for a selfie photo with the legendary cuemaster shortly after beating him in the semis.

For their triumphant campaign, they received corresponding financial rewards from the Philippine Sports Commission (PSC), Philippine Olympic Committee (POC), and President Duterte himself, who also conferred to Team Philippines the Order of Lapu-Lapu, a distinction awarded to individuals for their "invaluable service in relation to a campaign or advocacy of the President."

We honor them some more with this much-deserved salute.