RIZZA Diaz has been doing great the past few years, overcoming huge challenges in the big world of sports.

It wasn’t always smooth sailing for the lovely sports reporter because in the world of basketball, apparently even those on the sidelines are faced with challenge of making the grade — height-wise.

“Kasi ako I received a lot of nos, nos that would say I have to grow taller and I can’t, so parang sa akin noon paano ko kaya sosolusyunan ‘yun?” Diaz revealed to Spin.ph.

“What I did, I was just persistent about it, I gave the best that I could, UAAP, D-League, and then that caught their attention,” said Diaz, who actually stands five feet but gets dwarfed when working games featuring giants.

“There’s this quotation, ‘You just have to be always good so it’s hard for them not to notice you,’” she added.

Diaz has obviously proven height doesn’t matter: she is now on her third year in the big league, and continues to scale new heights.

She considers each game she works as a blessing.

“Every game is a gift to me. And sana maging regalo rin ako sa kanila and be an inspiration to many.

“I’m the smallest girl in this venue always pero with the help of everyone I’ve stood taller,” said the former UAAP courtside reporter for National University. 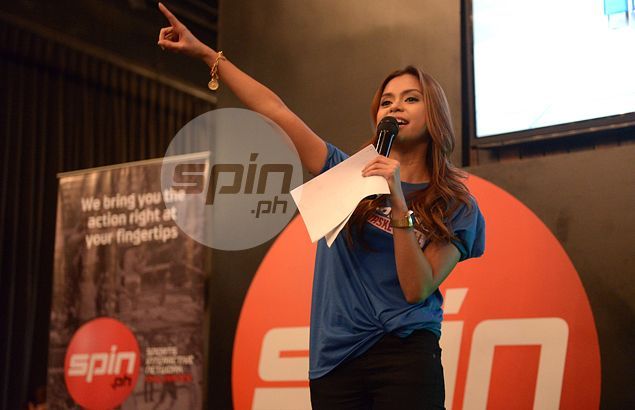 Diaz has been a sports fan since she was a kid, but noted that didn’t give her a huge advantage when starting on television.

“Tapos I got interested in college leagues and then it came as a surprise na naimbitahan ako to audition for UAAP,” she added.

Diaz tried auditioning as courtside reporter when she was still in high school but got turned down, saying she “didn’t look good” then.

It was the late veteran sportcaster Butch Maniego who saw the potential in the petite Diaz, when she was interviewed during a Philippine Basketball League game at her school Emilio Aguinaldo College.

“I was part of the student council and they have a halftime interview with me and courtside reporter Lia Cruz ako ’yung ini-interview to invite the alumni then after noon sabi ni Butch Maniego, ‘This girl looks good,’ not looks good pala, ‘sounded good,’” she recalled.

“Then he told me, ‘Why don’t you audition?’ sabi ko, sige I’ll give it a try but deep inside that’s it, pero hindi ko muna sinabi ‘yun,” she added.

“And then when I went to that audition I didn’t get very good feedback, I didn’t look good then,” she said.

“But then siguro napansin nila na marami akong alam, alam ko ‘yung sinasabi ko, and then after a month I got a call back and I started from there, tapos ito na.”

The basketball reporter has since broadened her horizons, hosting various sports events and making the list as one of FHM Philippines’ sexiest women.

Now a veteran, Diaz said she tries to help newcomers, encouraging them to always give their best.

Now aside from being a better reporter, Diaz has plans to give back to the indusrty.

“I was just given a game to prove myself and maganda naman ang kilabasan,” she said.

“It was always a dream, I don’t know if there is anything more than this but I’m hoping there is, I’m looking into being more than a reporter and maybe help Philippine sports in one way or another,” she said.