During the early days of the pandemic, athletes and coaches alike had to adapt to a world without sports. Some spent their time posting home workout videos, or taking up new hobbies.

And while the sporting world slowly adapted and the bigger leagues began reopening, many leagues and tournaments remain shuttered.

However, a group of athletes, spearheaded by the Ateneo de Davao’s athletic director Noli Ayo, decided to secretly meet via Zoom, three times a week, to bond and reflect on the difficult experience of the pandemic.

And so was born the M-W-F sessions, ably spearheaded by Ayo, who is also the convenor of the Mindanao Peace Games.

Meeting for over a year now, the group decided, early on, that they would go beyond the online meetings and condense their thoughts into an anthology of essays, to be published as a book entitled Winning Still. 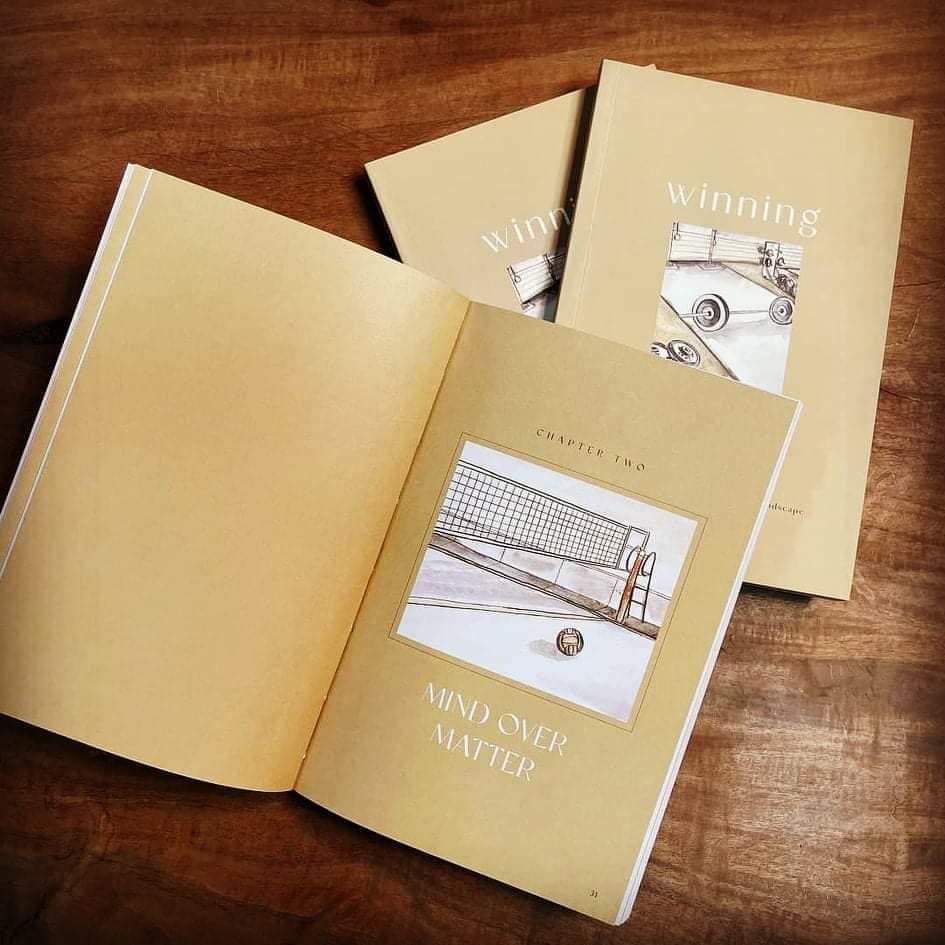 Winning Still is now a reality, with the book launching just last week. (You can check out its Facebook page for information on how to order.) Among the 27 authors who contributed essays are Jong Uichico, Akiko Thomson-Guevara, Hidilyn Diaz, Meggie Ochoa, Rebo Saguisag, and Oliver Almadro.

Each of the writers — most of them first-time book authors — poured their heart out into their essays, talking honestly about the meaningful insights they’ve picked up centered on winning.

In sports, winning will always be associated with trophies and accolades.

But there are other aspects of winning that are oftentimes overlooked.

In an interview Spin.ph conducted with a few writers from the anthology, coach Sandy Arespacochaga — currently in Belgrade with Gilas for the ongoing Olympic Qualifier Tournament — laughingly admitted that he fell behind in writing when the group decided to get cracking on the book. 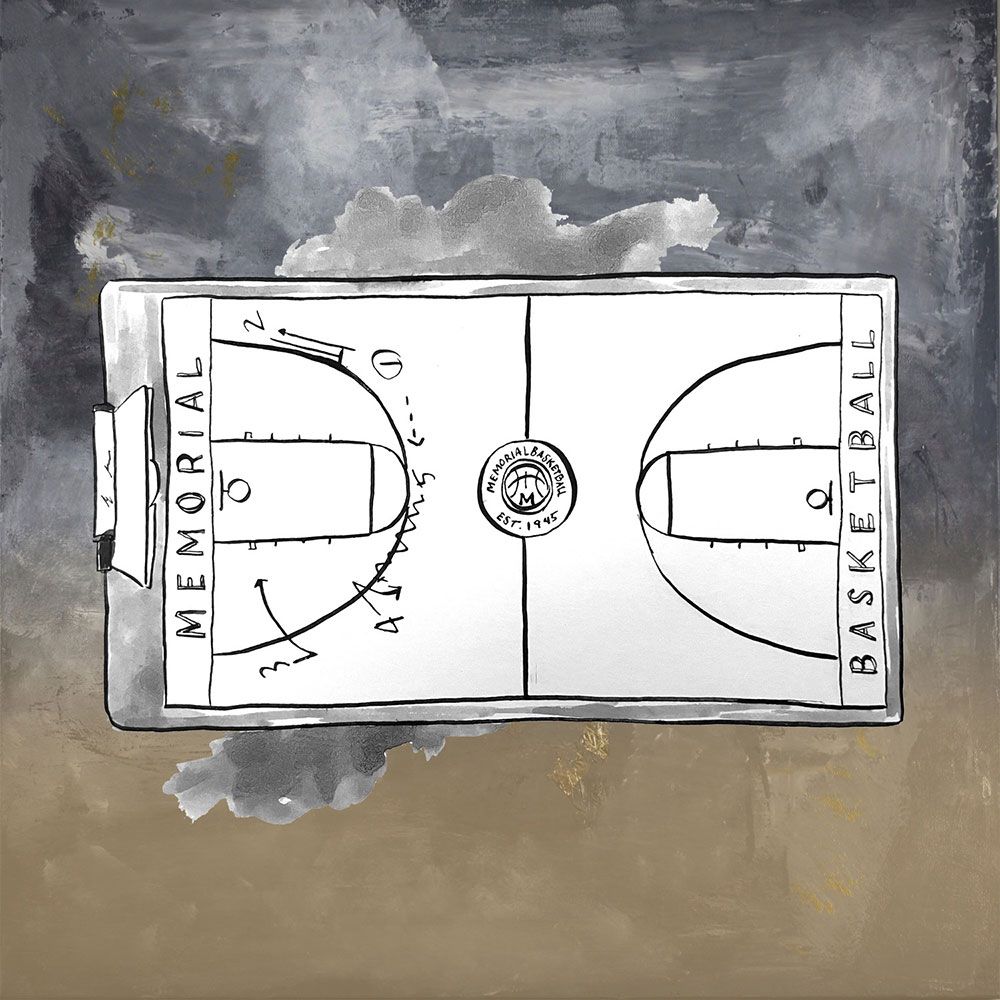 It’s a feeling that remains with him up to now — that emotion of being humbled and awed by the rich depth of learning the group always brought to the table.

“Iba-ibang story, iba-ibang perspective, iba-ibang pananaw. Normally winning is winning your game, getting a trophy, getting a medal, etcetera etcetera. [But yung] real winning [is] how you overcome adversity, how you emerge triumphant, not just in the sense that you beat yung adversity na yun, but how you emerge from it a stronger person,” Arespacochaga said. 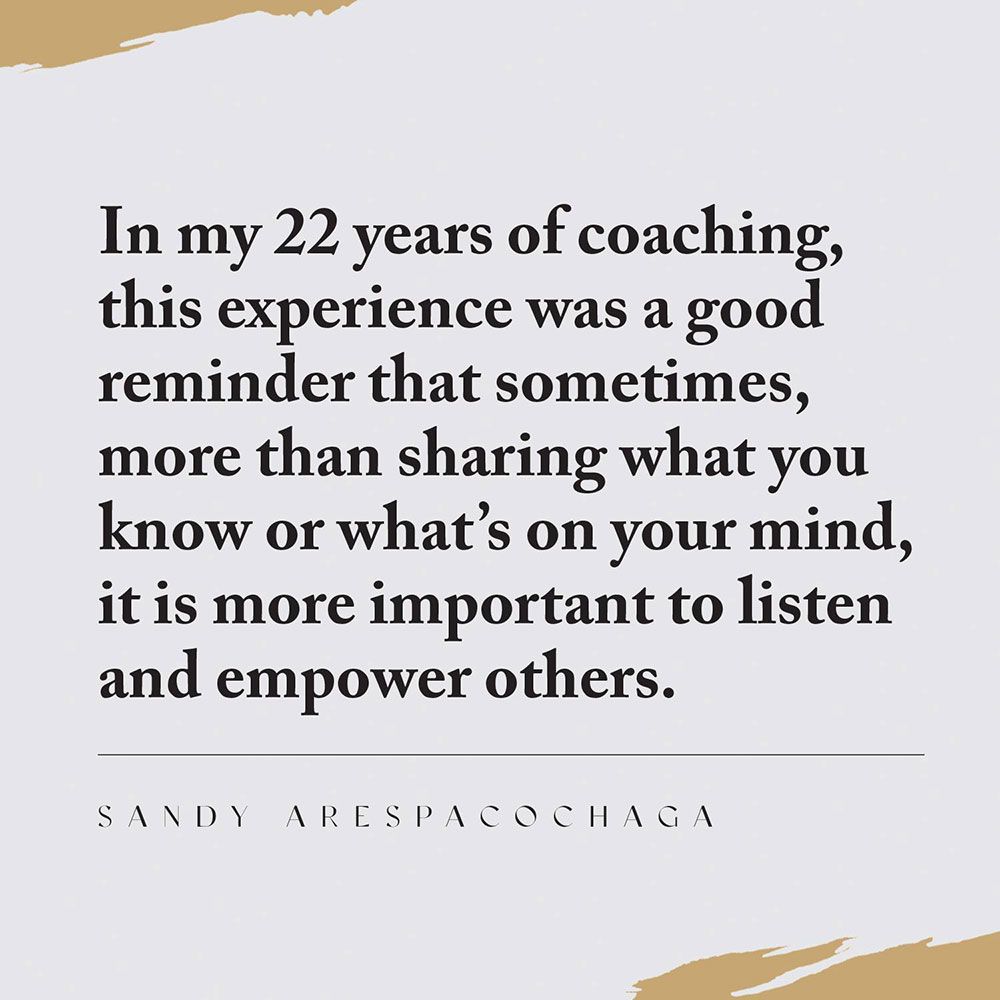 It took a lot of soul searching for these sportsmen and sportswomen to find their voice and talk about their struggles.

Belay Fernando, the General Manager of the Youth Football League, admitted that she isn’t known for her expressiveness, yet she found the courage to share her struggle with cancer.

“My reflection was: How can I do better with the time that I am given now?” she mused. “Because I already know what it is to go through this. And the number one answer is to rely on other people. You really need to rely on each other to get through these tough and dark times.”

The youngest athlete in the M-W-F Group, Gianne Dela Cruz, brought her own perspective to the essay she wrote.

Faced with discrimination as a female basketball player in high school, Dela Cruz didn’t event want to get into sports again when she entered university. But that mindset changed when she began to meet inspiring mentors like Noli Ayo.

“Naging pasensyosa na ako sa teammates ko,” said Dela Cruz, who is the team captain of the Ateneo de Zamboanga Lady Aguilas. “I learned how to bond with my teammates. I learned how to have a relationship with them to have a family that supports you all the way. Into the point. I am willing to protect them always. Parang di na siya team e.”

Moreover, she continued, she began thinking beyond the game. “Paano natin iche-change ang perspective ng sports na hindi lang siya laro? It is beyond sports. It is beyond more than just playing.” 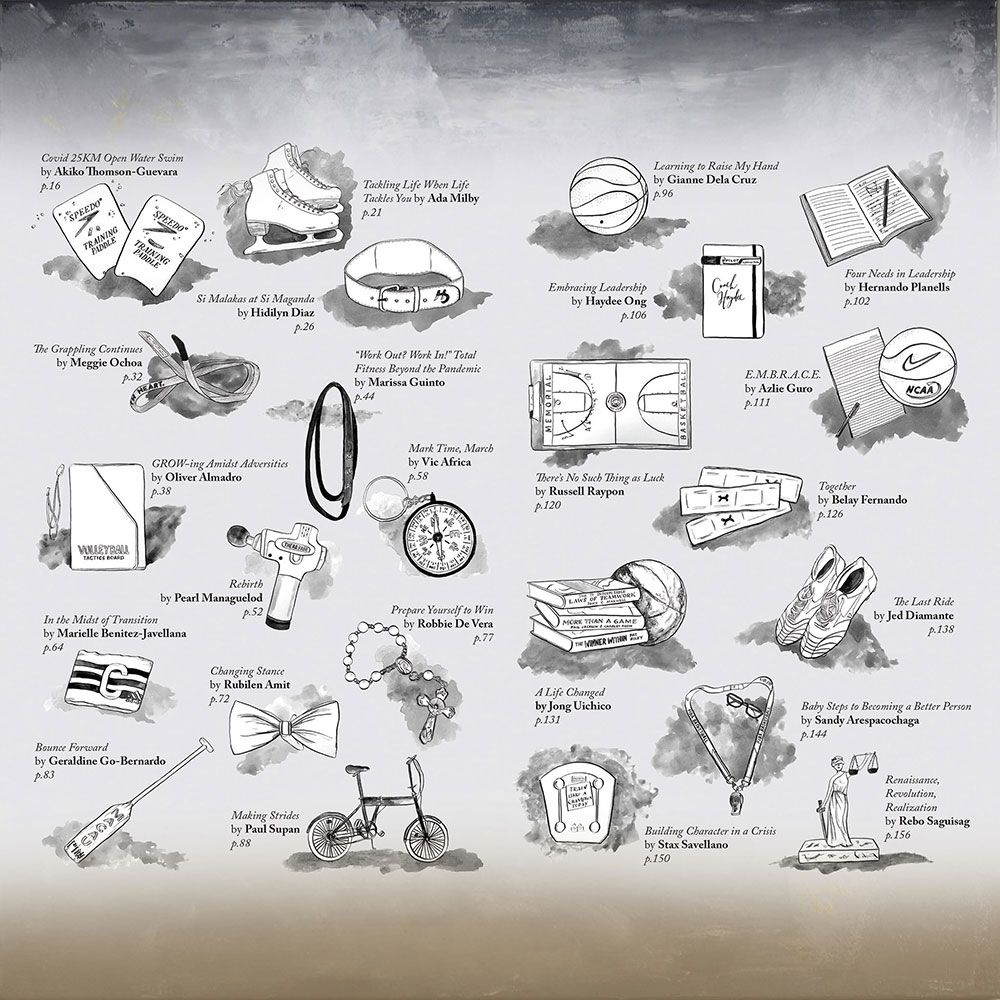 Noli Ayo’s influence even extended overseas. Russell Raypon, a school and sports psychologist based in the United States, reflected on his mental health struggles during the pandemic.

Diagnosed with depression and anxiety at the start of the year, “It was like what was happening to me internally was happening to everybody else was happening like on a global scale,” said Raypon. “Feelings of isolation and confusion and frustration and fear of the unknown, all that stuff.”

Attending the M-W-F sessions made him go through some “significant soul searching,” which he writes about in his essay.

Like Raypon, Pearl Managuelod, a board member of the Philippine Olympic Committee, also struggled with the tectonic change brought on by COVID-19. In one fell swoop, the global health crisis demolished her life plans of making a new life for herself in Canada.

She initially felt frustrated being stuck in the Philippines, but she slowly accepted it. Eventually she realized that her situation has given her a major role in Philippine sports, as she currently spends most of her time working on ways to prepare our local athletes for international tournaments in this time of crisis. 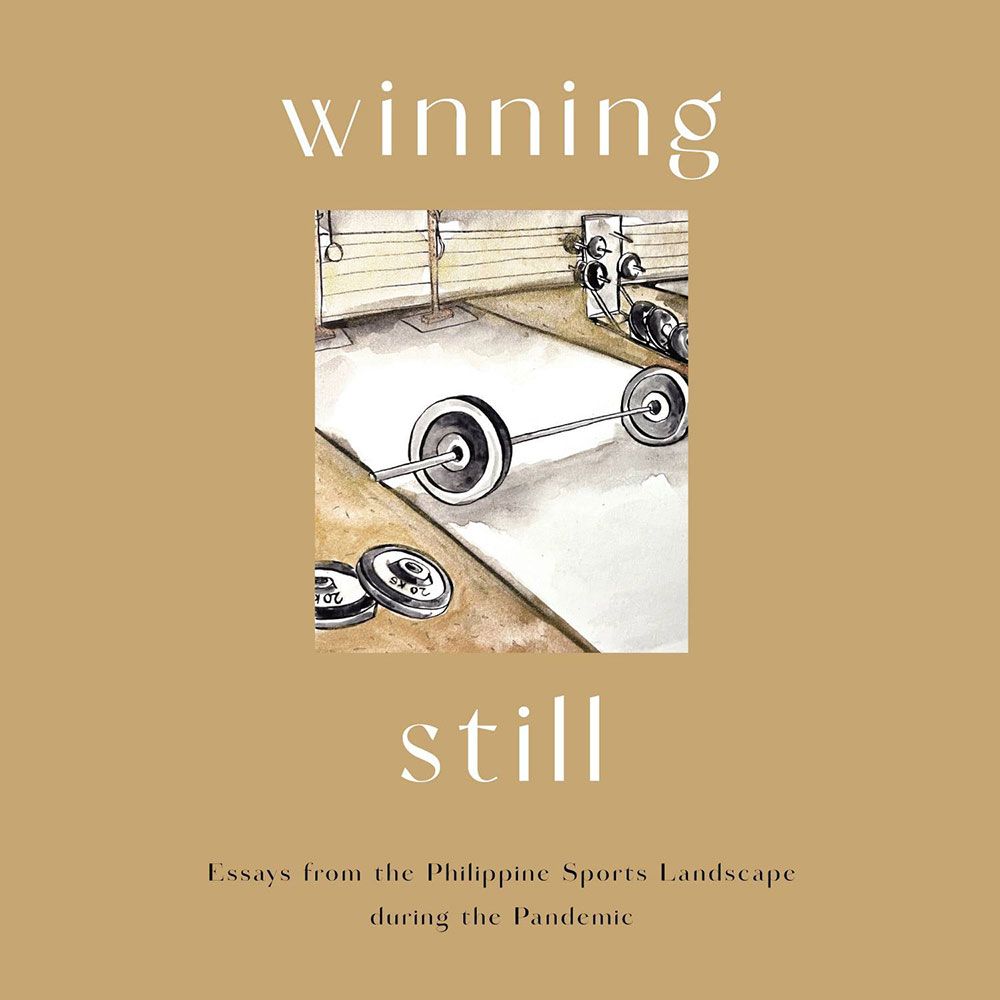 To readers of the book, she said: “I hope you can learn a thing or two from my experiences on how I was able to accept what was happening and use that to your advantage. Just look inside you. You have your strengths. It's really just about reframe your mind, look at the situation in a better, more positive way, and just have faith.”

In the end, their stories revealed that winning isn’t always about attaining the coveted silverware or medal. Even overcoming your insecurities, internal emotions, or daily struggles are signs of victory.

It’s not always about going to the gym and training your body or pinpointing the Xs and Os, as Coach Sandy would say. No matter how much they’ve accomplished, sports personalities are still human beings, filled with personal conflicts.

And these writers, instead of hiding their personal conflicts, decided to think about the bigger picture — creating "noises of possibilities", as Gianne would say.

With additional reporting by Lio Mangubat.