How a Pinoy longboarder became coach of the Thailand national team

IN JOSEPH “Epos” Falcone’s assessment, the downhill skateboarding event of the Southeast Asian Games was a David versus Goliath match-up. The Goliath, of course, was the Philippine national team.

“Overqualified po tayo,” he said of Philippine longboarders. According to Falcone, the local downhill skateboarding scene has been around for more than a decade already, with the likes of Dandoy Tongco and Gerard Cancio leading the way in the local speed skating scene.

So it should come as no surprise that the Philippines dominated the podium finishes during the December SEA Games. Jaime de Lange and Duke Pandeagua nabbed both gold and silver, respectively, for the men’s downhill event, while in the women’s, Rydelle Abarico carved her way to a third place finish.

Falcone was there, too, in Maragondon, Cavite. But he was in the enemy camp, so to speak, as head coach of the Thailand national team.

It’s the question everyone asks of him: Why is he serving another country, instead of his own?

Falcone wants to make one thing clear. “Bago ko tinanggap itong gig na ‘to, I offered my services to our national team,” he said to SPIN Life. “[It] was my ultimate dream, kasi Bisaya tayo. We love our country, [and] it's a big honor to represent your country.”

But ultimately the national longboarding team decided to appoint Harry Clarke, a champion skater from Australia, as their head coach.

That alignment came a few months later, when he was offered a gig as head coach of the Thailand team. With the SEA Games coming up later in the year, the Thais knew it was time to get serious and hire a seasoned professional who would, hopefully, lead their team to victory in the sport’s first-ever showing in the regional meet.

Falcone was, in many ways, the perfect candidate. He had family in Thailand — a brother and sister — and had been coming there so often that he considered it a second home. He also had solid credentials. He first began bombing hills in a homemade skateboard in 2006, and joined his first race in the slopes of the Meralco complex in Pasig during the 2008 Gravity Games.

In 2013, he even won against Canadian champion Patrick Switzer in one leg of the Visayan Longboarding Tour. He also had experience running a series of racing clinics across the Philippines and many parts of Asia. 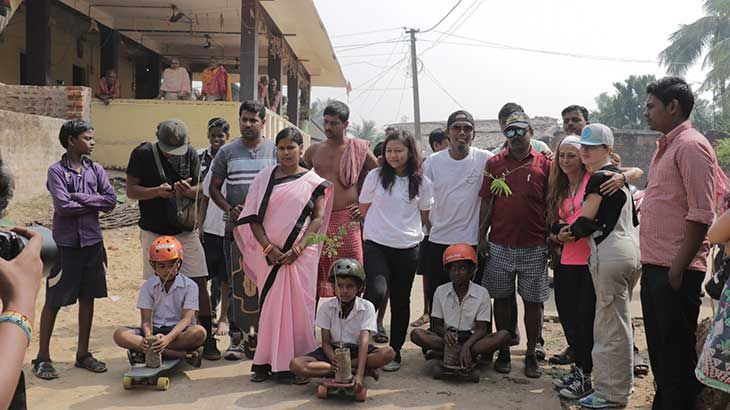 Falcone arrived in Thailand in August, four months before the start of the games. It may sound like an absurdly short time to train, but he already had a systematic program in mind.

For the first two months, he assessed the racing skill of each member of the team so he could make a customized training plan for them. He also taught them breathing and meditation techniques.

On a thin plank of wood that can rocket up to 100 kilometers per hour — the world shrinking into tunnel vision as a rider’s senses blur from the speed — mental training was one of Falcone’s top priorities.

Through meditation, “they [become] more conscious of what they’re doing [instead of] memorizing it. We develop their muscle memory, [we help them understand] weight distribution, [and] overcome adversity, fears, worries while on your run.”

By October, the team was bombing regularly down the highlands of Phrae, a hilly province in the northern part of Thailand. Falcone’s emphasis then was to teach them tactics — how to stay safe and speedy on a high-speed racing line that often affords no room for error. He also needed to teach them the intricacies of gravity and aerodynamics, to maximize air speed and the pull of the earth to rocket them to the best possible speed.

“[In] this process, [it was] very hard on my part because only a few of them speak English,” Falcone recalled. “Our Thai manager helped me translate what I'm saying, but it was hard [for me] to get through their minds because they can't express their feelings to me.”

By December, they were as ready as they could ever be.

All downhill from here

During the time trials at the SEA Games downhill skating events, Falcone noticed a very curious thing about the Pinoy women riders, Abarico and her teammate, Abigail Viloria.

So he advised Nuansamorn Pimchua, the sole Thai skater to make it to the women’s finals, to pull back and take the safe lane behind the Philippine riders. He had a bad feeling an accident might take place in one of the hotly contested turns.

As it turned out, Malaysia’s Grace Wong attempted a bold move during the race, taking on the inside of Viloria as the two entered a turn. Viloria overshot the turn and collided with Abarico, who had been leading throughout most of the race.

Hanging back behind all of them, Nuansamorn took a took a wider, safer lane. While she could not close the distance between her and Wong, she took a respectable silver finish. Abarico recovered from the crash for a bronze.

“The goal [for the SEA Games] was [really just] race safety,” Falcone said. “To least be in the podium position, and if manalo, bonus na kung may medal man. Kasi ang bilis ng race course! Nasa 90 kph. One mistake lang, it’s game over.”

For him, one silver medal against the Goliaths of regional skateboarding was already a massive achievement for the Thai team. Especially since the entire expedition was, as Falcone described, “suntok sa buwan.”

His contract over, he's returned to the Philippines. But if the Thailand national team comes calling again, Falcone is willing to return to coaching duties. Naturally, he takes pride in his work. “I gave all the best of my knowledge and experience for this camp so that my team can compete at the highest level of the competition.”

On a scale of 1 to 10, we asked, how would he rate his team’s performance in the SEA Games?