PARIS — Hassan N'Dam, former middleweight boxing champion of the world, wanted to repay the French hospital that cared for his father-in-law through his bout with COVID-19.

Perhaps with Champagne? Or chocolate? No, N'Dam thought: "These are things that won't last. I wanted to leave something quite memorable."

It occurred to him that he held the answer in his own hands — or rather, in his fists. He would give the staff at Villeneuve-Saint-Georges hospital boxing lessons, to help them relieve the tension of long shift work during the pandemic — "letting off steam, getting rid of all one's emotions."

"They have seen so many (difficult) things that they came here looking for something," said N'Dam, who wore a sky blue face mask as he spoke at the hospital. "Sometimes they came to laugh, to let off steam. Others came to discover something, others to learn, improve." 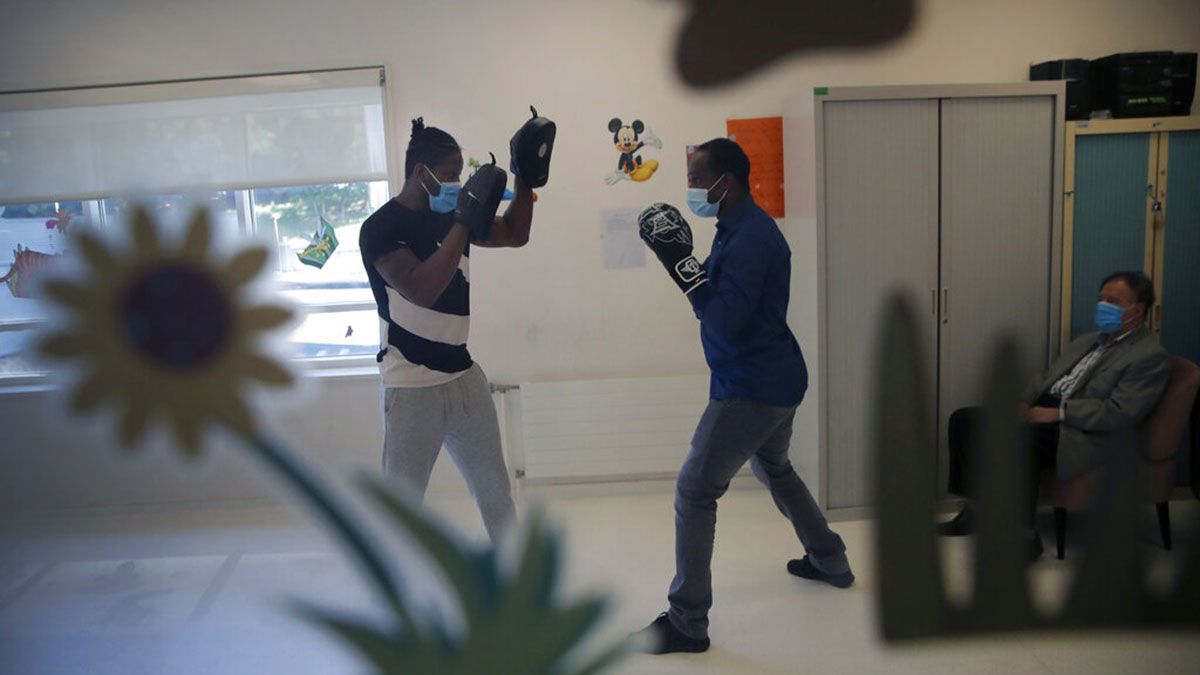 The 36-year-old N'Dam, who represented Cameroon at the 2016 Olympic Games, has won 37 of 41 pro fights — 21 by knockout. His 30-minute training sessions have been immensely popular with the staff.

As a nurse in the intensive care unit, 27-year-old Marina De Carli has been on the front line of the pandemic since it hit France.

"In the ICU we see things that are not easy," she said. "So it feels good to let the pressure drop a bit."

Wearing camouflage-pattern shorts and a face mask, she threw punches into the burly boxer's hands during her fifth and final class.

Operating theatre nurses Kenza Benour and Nassima Guermat warmed up for their training by skipping rope — awkwardly, because their shoes were covered with blue plastic protective shields. 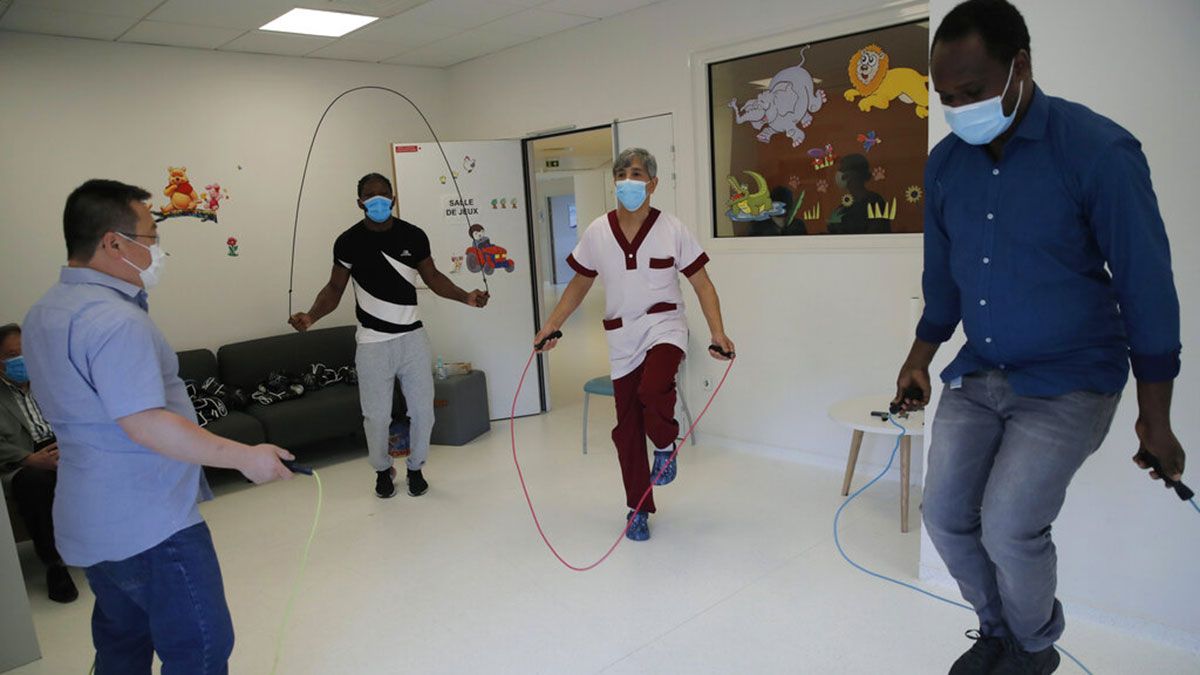 The hospital boxing bouts also gave N'Dam valuable time to see his father in law, Jean-Claude Valero, as he recovered from the virus. On Wednesday, Valero was well enough to sit and watch N'Dam in action.

Philippe Wodecke, 55, who works in part of the unit which treated Valero, was keen to learn from the ex-world champ. Dressed in crimson red tracksuit pants and wearing a T-shirt from the 2012 London Games, the orthopedic surgeon's pugilism belies his age.

Light on his toes, the stocky surgeon unleashes a quick four-punch combination that seems to surprise, and perhaps even impress N'Dam. 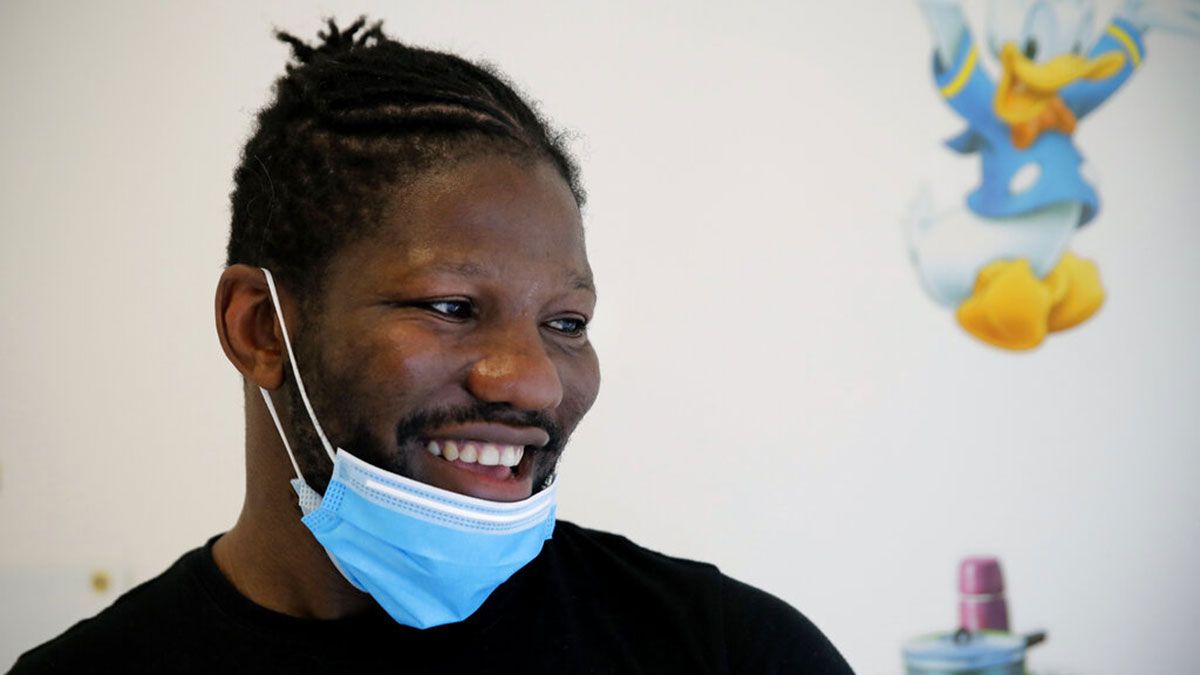 Wodecke's boxing career is unlikely to take off. But the workouts have been an invaluable help for him and his weary colleagues.

"A moment of escape, a moment of relaxation amid the torment," Wodecke said. "He's done us a lot of good."