An underdog in life and on the court, Bam Adebayo motivated to thrive for mom

He didn’t need to see video. Or talk to Heat teammates. Or check the stats.

He only needed to think of his mother.

“That first half wasn’t me and I had to reboot myself, man,” Adebayo said. “So, you ask yourself: Where do you come from and what’s your why? What’s your why? And for me, that’s my mom.”

Marilyn Blount, this was for you. Adebayo nearly outscored the Boston Celtics by himself in the third quarter, the Heat turned the game around and went on to win 106-101 Thursday night (Friday, Manila time) to take a 2-0 lead in the Eastern Conference finals — putting the kid who grew up in a single-wide trailer with a mom making something like $15,000 a year two wins away from the NBA Finals.

Adebayo had four points at the half, and the Heat were down by 13. He had 17 in the second half, when Miami outscored Boston by 18.

“Games are long and you just have to figure out different ways to impact winning,” Heat coach Erik Spoelstra said. “And Bam, he understands that.”

It wasn’t just Adebayo in the second half, which is the brilliance of this Heat team — it’s never just one guy. Adebayo had 17 points after halftime on 8-for-10 shooting, Goran Dragic had 16 points in the final two quarters, Tyler Herro had more rebounds than anyone after halftime and Jimmy Butler made three steals in the final 3:40 to help Miami finish off matters.

“I’m happy to be on this team with these guys because everybody here has a different story,” Adebayo said. “We all come from nothing and that’s what’s beautiful about this team.”

He may have come from nothing. Right now, for a Miami team that is 10-1 so far in this postseason to match the best start in franchise playoff history, he’s doing everything.

He had the game-saving block of a Jayson Tatum dunk attempt in the final seconds of Game 1 of the East finals, made the NBA’s All-Defensive team, became an All-Star for the first time and won the skills competition at All-Star weekend. 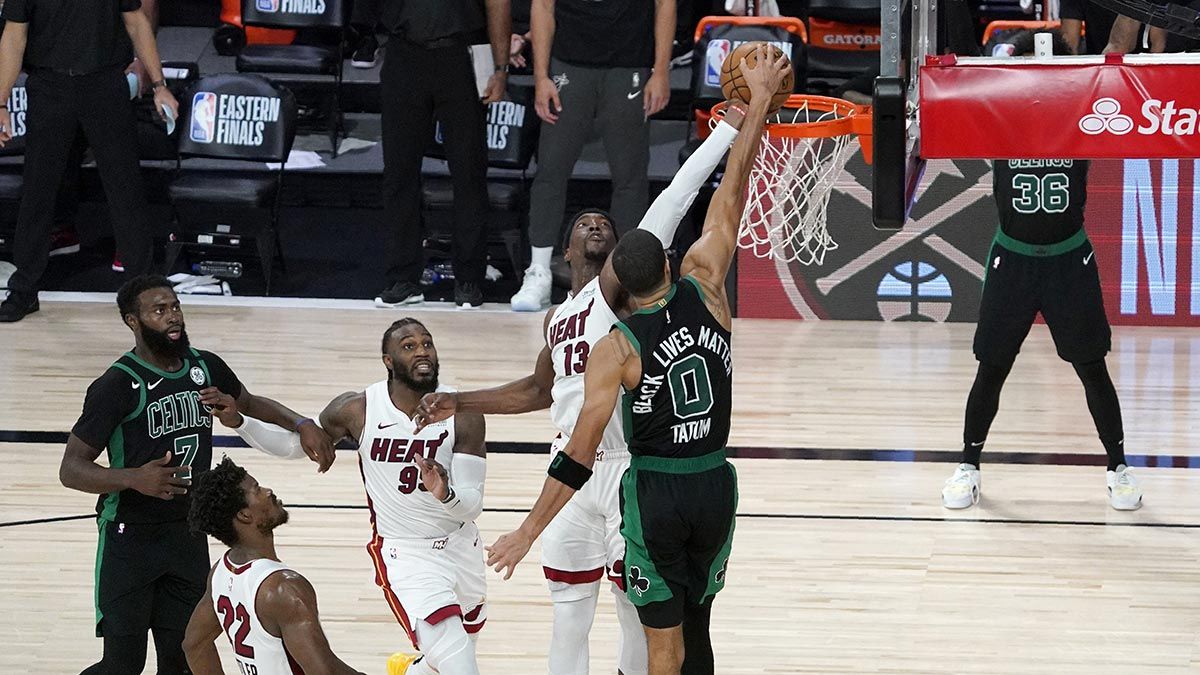 He’s averaging 16.8 points, 11 rebounds and 5.1 assists so far in the playoffs; the only two players who have done that, at his age of 22 or less, in a full postseason are Magic Johnson and Charles Barkley.

“He knows what makes him tick, what makes him go,” Butler said. “He knows why he’s playing the game. Spo always says, ‘What’s your why?’ He gets it. He understands. He knows that we need him to play at an extremely high level to be successful. He’s an All-Star, All-Defensive Player. He’s everything for us.”

Adebayo could agree this offseason, whenever free agency starts, to a contract that will set him up for life, set his mother up for whatever she wants as well. He’s already looking at houses for her; these days, she’s got an apartment in the same building where her son lives, just down the street from the arena that the Heat call home.

He doesn’t hide from the past. He doesn’t forget having nothing. It doesn’t embarrass him. It inspires him.

“That competitive nature comes out when I feel like I’m playing bad and when things aren’t going right,” Adebayo said. “I think about how she fought through struggle. I feel like she was in the gym tonight. It was like I could hear her in my ear. I watched her get knocked down and get back up so many times. You see that for 18 years straight, you take that load on and feel that responsibility. And my responsibility is to provide for my mom, and the best way to make sure I can do that is to help us win.”

They’re winning. They’re the surprise of the bubble, in the sense that they’re the lowest seed — Miami was No. 5 in the East — still standing.

Two more wins, and they’ll be going to the NBA Finals. Adebayo knows they’ll be the hardest wins to get.

“It sounds crazy,” Adebayo said. “Think about the beginning of the year, when we were telling everybody, ‘We have a chance, we have a chance.’ I remember having a conversation with a couple guys, playing out how the season was going to go before it started, and they said we were a No. 7, No. 8 seed and would get knocked out in the first round.

“I took that kind of personal,” he added. “You’re not going to sit here and just bash my team like that. We’ve proven to people now that we belong in the playoffs, that we’re taking this head on. We’re underdogs. That’s our mentality.”

He’s been one his whole life.

It seems to work for him — thanks to his mom.

“Watching her, I built my competitive nature,” Adebayo said. “That’s how I learned that the strong survive.”
___