Setting the bar: Get to know EJ Obiena's past, and his very bright future

FILIPINO pole vaulter EJ Obiena can proudly say that he is the best Asian pole vaulter in the continent after eclipsing the Asian record after 23 years.

The pole vaulter took it to greater heights after clearing 5.93 meters on his third attempt during the Golden Roof Challenge in Austria earlier this month, ending the 1998 record of Igor Potapovich of Kazakhstan.

“Being able to say that I hold that record, that I have actually have vaulted higher than everyone else in Asia who have done the sport… yeah I’d take that credit any time of the day,” Obiena said. 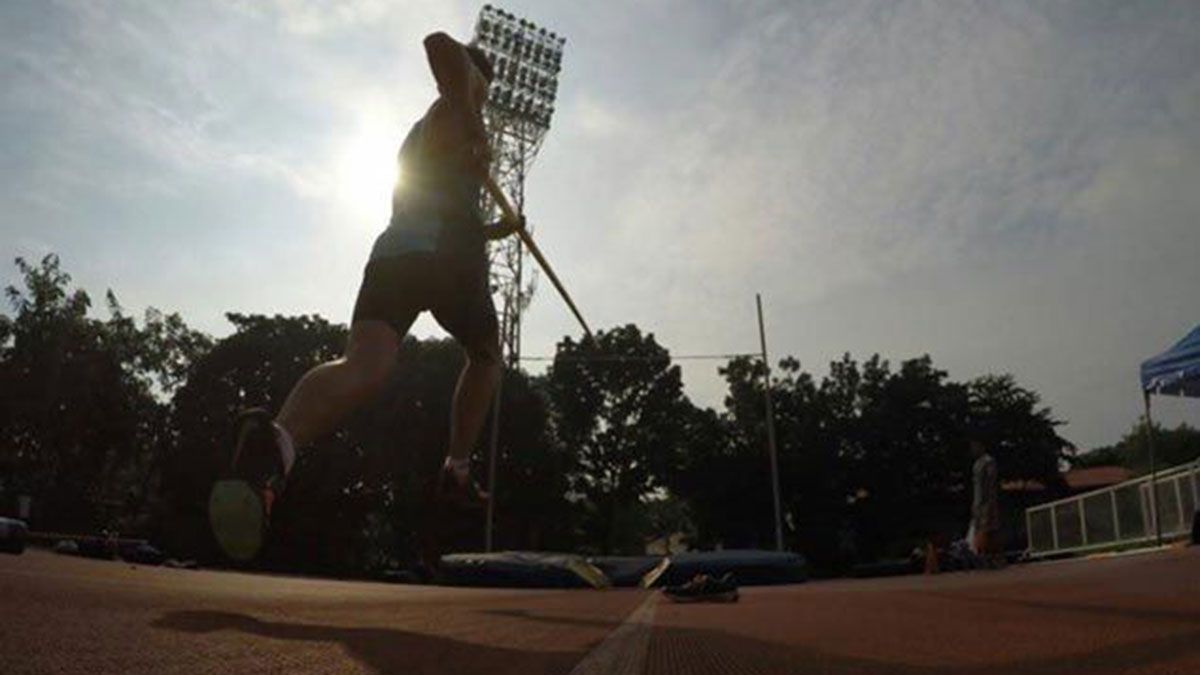 The “Golden Boy”, who was born and raised in Tondo, Manila, started his early years of pole vaulting when his father-coach, Emerson Obiena, would bring him to the Rizal Memorial Stadium as a kid.

As a kid, EJ could not jump by himself and would be guided by his father.

In elementary, there was no pole vaulting so instead, he joined the track team and did hurdles. During his years in high school, Obiena started to represent his school, Chiang Kai Shek College in Manila.

In the UAAP, Obiena represented the University of Santo Tomas and joined the UST Tracksters team under the coaching of Manny Calipes.

Upon transferring to UST, coach Manny and coach Emerson created a runway pole vaulting area just near the grandstands where EJ could train. EJ would also join 110-meter hurdle competitions. 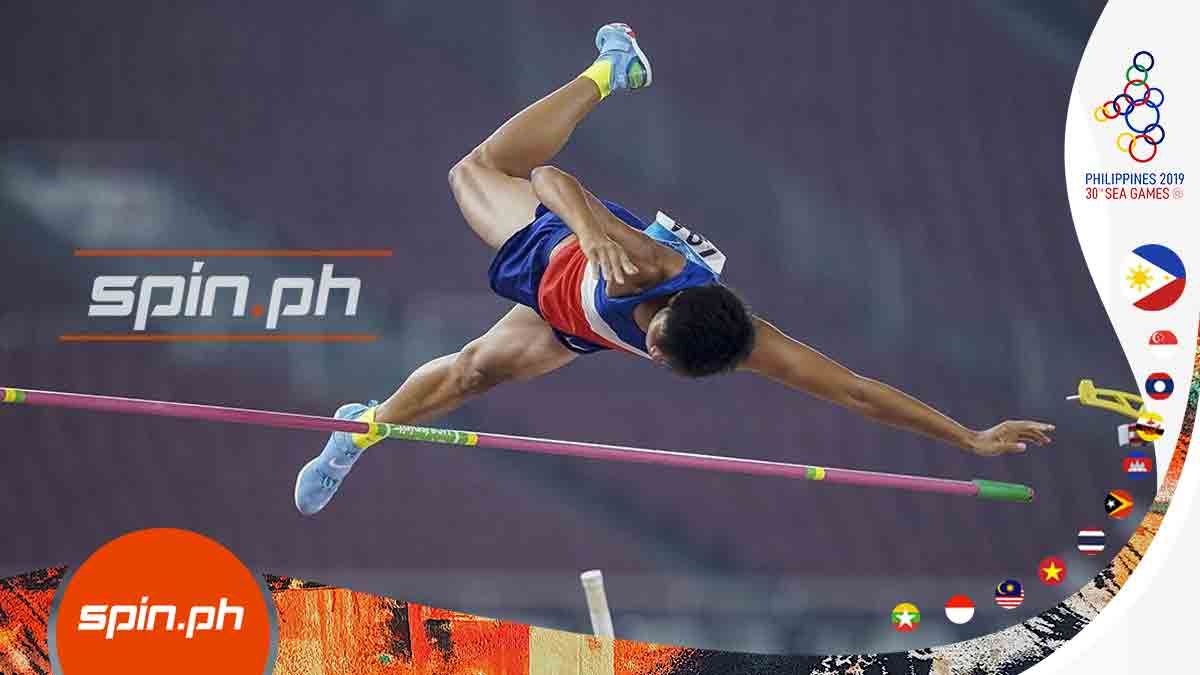 Snapped up by the national team, Obiena represented the Philippines in the Southeast Asian Games in December 2019, and won a gold medal after clearing 5.45 meters on the bar. He tried and failed to hit 5.5 meters, but his performance was enough to erase the previous SEA Games record and get him on the top of the podium.

By then, Obiena was already Olympic-bound — the first Filipino athlete to qualify for Tokyo 2020, after clearing 5.81 meters in Piazza Chiari, Italy on September of that year.

“I never really thought that it would be possible until I qualified and made that mark,” Obiena recalled.

With the 2020 Olympics postponed to this year, Obiena journeyed across Europe to prep for the summer games, repping the country in four tournaments.

The first was in February where he eclipsed the PH record after clearing 5.80 meters during the ISTAF meet in Berlin, Germany. This feat also surpassed his own personal best of 5.62 meters. And yes, Obiena also won a gold medal.

Up next was the Orlen Indoor Cup 2021 in Poland, where he cleared 5.86 meters — just a week after shattering the PH record of 5.80 meters.

Despite the record-breaking leap, Obiena settled for silver after completing the jump in three attempts.

Moving on to Mossingen, Germany during the Jump and Fly International Athletics meet last June 11, the Olympian took home a gold medal after clearing 5.85 meters, eclipsing the record he set during his Olympic qualifying leap in Italy.

His last before his Olympics stint was at the Irena Szewinska Memorial 2021 in Bydgoszcz, Poland, mere weeks before the Tokyo kickoff. Obiena cleared 5.87 meters, finishing second to beat his personal and Philippine record (5.85 meters). 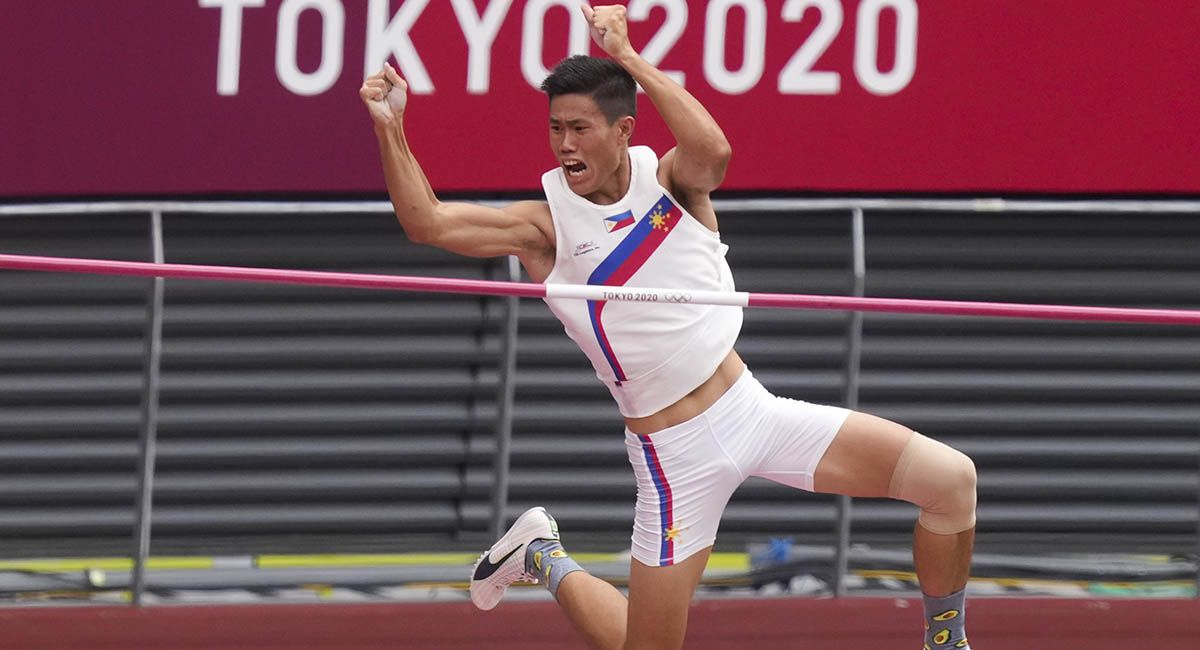 EJ Obiena at the Tokyo 2020 Olympics

During the Tokyo Olympics, the Filipino pole vaulter thrilled Filipino fans when he qualified for the finals of the men’s pole vaulting event after clearing 5.75 meters on his third and final attempt.

He placed fifth overall in his group during the qualifiers and 11th overall as he made the cut.

However, during the finals, Obiena fell short after failing to clear 5.80 meters on his two attempts. He was given two attempts on his third, after technical difficulties that he contested.

Obiena stayed in the 11th spot of the competition after completing 5.70 meters.

Post-Olympics, Obiena skipped out on a homecoming to continue joining tournaments in Europe. It was a decision, he said, that had been made even by his Ukrainian coach Vitaly Petrov, whatever his outcome may been in the Olympics.

“[T]hat’s what I get for having a good veteran coach knowing about these kind of things. He has this contingency, he has plans, and these plans are mostly with him,” Obiena said.

During the Athletisissma in Switzerland, part of the Diamond League, Obiena placed fifth among the 10 competitors after clearing 5.52 meters. His record was tied for fifth with KC Lightfoot of USA and Ethan Cormont of France.

In the Paris leg of the competition, Obiena broke his record anew after clearing 5.91 meters, surpassing both his personal best and the national record of 5.87 meters. Obiena placed second in the competition.

Following his performance in Paris, Obiena ranked up to fifth from 10th in the world rankings in pole vaulting.

“I’m surprised with what I have done after Tokyo,” Obiena said.

In one of his most recent outings, the former trackster qualified for the finals of the Wanda Diamond League in Zurich during the Allianz Memorial Van Damme in Brussels where he placed 10th among the 12 competitors to qualify. He cleared 5.65 meters.

In the finals, Obiena fell short of a podium finish after clearing 5.83 meters on his second attempt to take fourth place. Still, he took home a cash prize of $4,000. 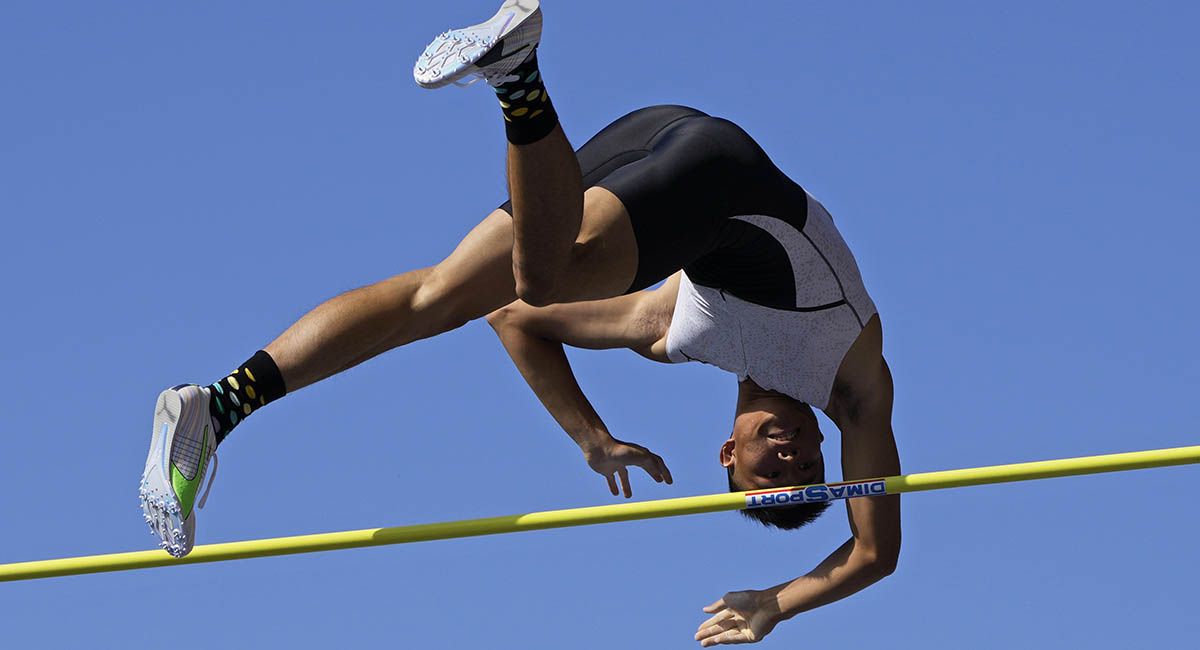 With so many achievements under his belt, the Filipino pole vaulter, who now holds the Asian record, shared that the force powering his achievements was his coach and mentor, Vitaly Petrov.

“[H]e’s done over the top being a coach. He’s been my second father here. He’s been helping me out even paying some of my expenses along the way that was for him,” Obiena said.

EJ also shared that the moment he landed a new Asian record in Austria, he immediately texted coach Petrov to tell him that he was dedicated the victory to him.

“[Y]eah he’s my inspiration, he’s 76 years old, going to the track each day. What’s more inspiring than that, you know?” he said.

And for the aspiring pole vaulters out there, Obiena can only say: “Go for it.”

“It’s difficult but if you believe that you believed and you want something you’ll find a way,” Obiena said, “[J]ust keep pushing, if you want some help, some assistance hit me up, call me up,” he added.

For those who want to start but have no access to equipment, facilities, or even the know-how to one of the Olympics’ most intimidating sports, he recommends contacting the Philippine Pole Vault Club, which was founded by his father Emerson.

The Thomasian pole vaulter hopes to see more championships, to break more records, and to bring home more medals as he continues to compete for a better performance come his stint in the 2024 Olympics in Paris.

“I think my approach never really changed. It was murky after Tokyo, of course. I didn’t know how or what to do. I think what showed after that is I’m able to bounce back, I’m able to stand up,” he said.

Obiena, who is currently on his vacation after his last competition in ISTAF in Berlin, is hoping that the Philippine Government will approve his funding for his training after it concluded last August.

“[A]ll the expenses I’m incurring is being paid by my team, my own pocket… my own money. It’s not cheap to be in Europe,” Obiena said.

Obiena promised his fans that he will continue to give it his all, work to the best of his capabilities, and focus on the task at hand.