EVERY Thursday, Ryan Racela drops a new episode of his vlog, #RyanRambles.

He’s got his opening spiel down pat, too. “My name is Ryan, and I like to ramble about Filipino culture. So kung trip mo yan, please consider subscribing. I post new videos every — single — Thursday,” he says, the camera zooming in to his face at every pause between the last three words.

The vlog jumps madly from topic to topic, as Racela sifts through the ephemera of Pinoy culture and even tidbits from history.

But on November 26 last year, he did something a little different.

“I was playing 2K the other day, tapos nahanap ko yung old PBA team ng dad ko,” he said to intro the episode. “And since kaka-birthday niya lang, it’s the perfect time, I guess, to make a video about him.”

On his copy of NBA 2K19 (he admits that he’s a little behind), he loaded up a custom roster of an all-star assortment San Miguel Beermen, collected from the Jong Uichico era and decked out in Raptors jerseys: Ildefonso, Seigle, Mente, Mustre, Cablay, Lago… and then one O. Racela, with an overall rating of 88.

On the sliders, Racela fiddled with the stat scores, dragging the free throw slider from 88 to 95, upgrading the steal stat from 63 to 99. “I never said this would be fair,” Ryan said with a laugh, even as he jacked up Joey Mente’s dunk scores. “Obviously biased ako sa team na pinanood ko growing up.” 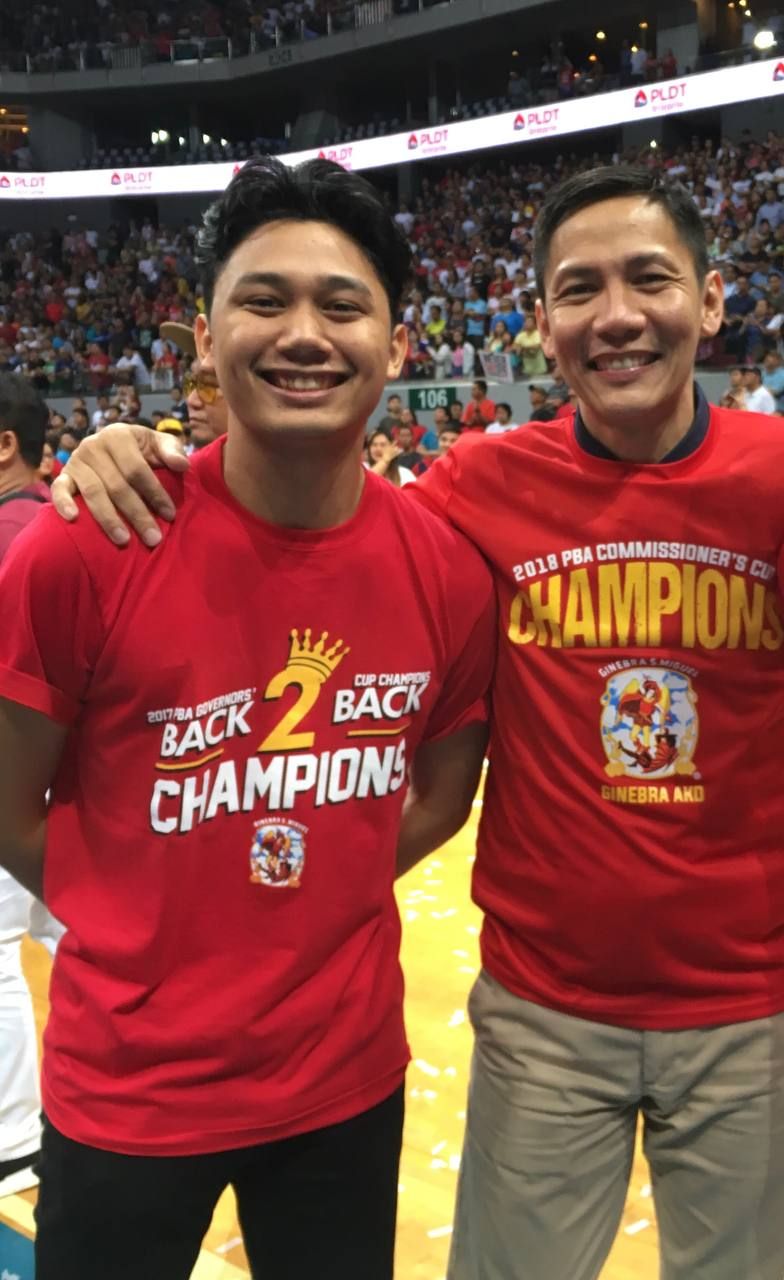 It’s a very Ryan Racela tribute to his father, who is, of course, the legendary Olsen Racela — the 18-year PBA mainstay with nine rings, six All-Star nods, and two Mythical First Team selections.

And while what he’s doing now is miles away from basketball, the younger Racela says it’s all inspired by what his father once said to him.

“[Here’s] something that my dad always told me about basketball: Parang naramdaman niya na he's never worked a day in his life cause he's doing what he loves,” Ryan said in a video interview with SPIN Life.

From an early age, Ryan — the oldest son of Olsen — knew he wouldn’t be following in the footsteps of his father.

“I quit training maybe at seven years old,” the twenty-four year old recalled to SPIN Life. “For me it was just so weird. I'd go to those basketball camps, and everyone's looking at me, parang, five years old pa lang ako, akala nila makaka-dunk na ako or something.” 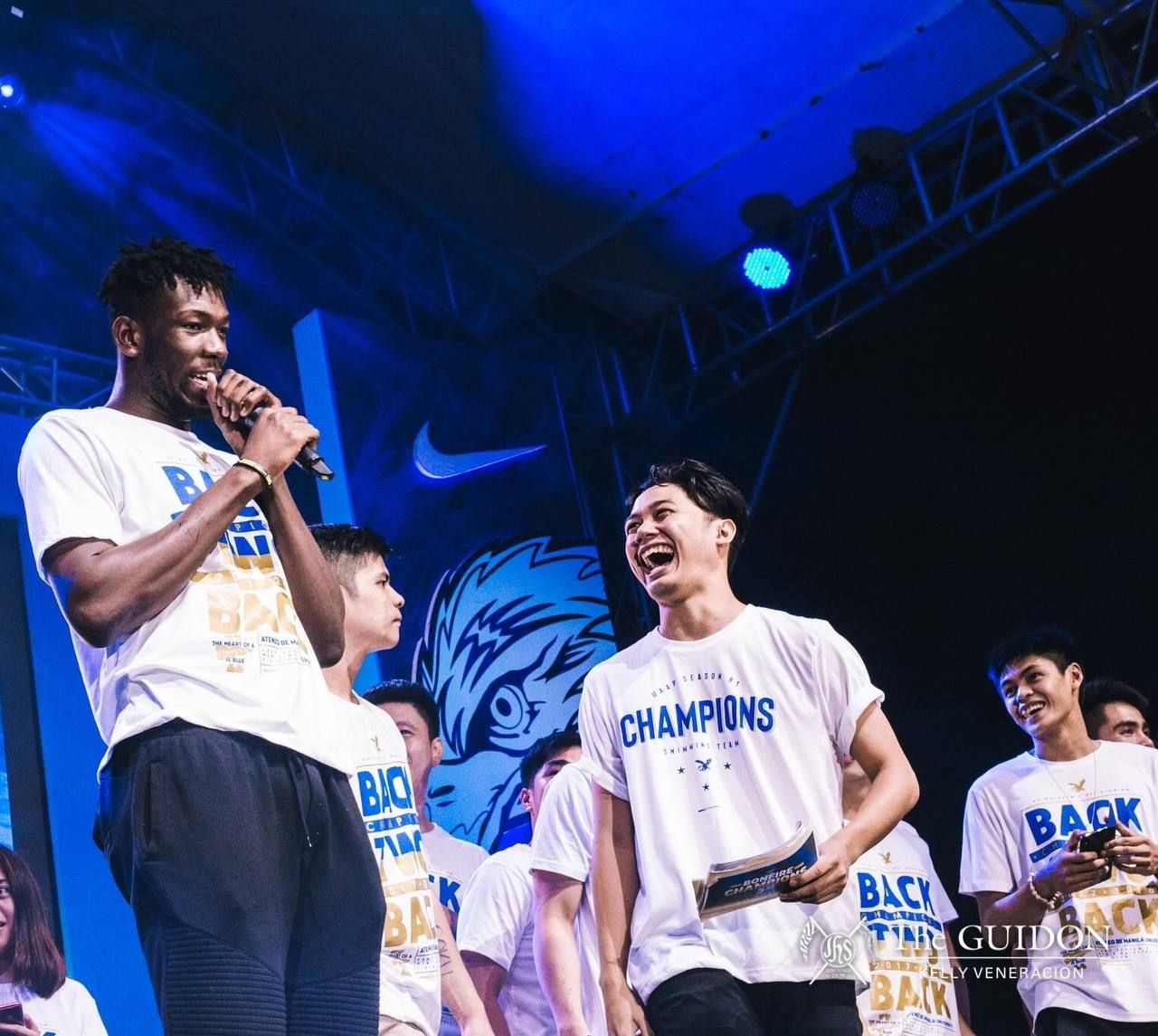 He didn’t just fall in love with the game the way his dad did, even if he grew up watching games every week, live, doing his homework in the Araneta sidelines with Danny I’s kids Shaun and Dave.

Instead, he grew up falling in love with music.

“My mom's brothers were in a band, and they really taught me what music to like,” Racela said. That band was called The Hurt, and they played new wave and punk throughout the late ‘80s in Bacolod. “People my age were listening to Katy Perry, tapos yung pinapatugtog nila sa akin, mga Eagles, Jimi Hendrix, stuff like that.”

You can clearly see his love for music in the background of his #RyanRambles vlogs. There’s a vinyl copy of the groundbreaking 1966 Beach Boys album Pet Sounds, as well as the 2013 compilation of Francis M.’s hits, packaged under the name The Story of… The familiar chestnut grain of a Fender Stratocaster is visible at the left side of the frame. 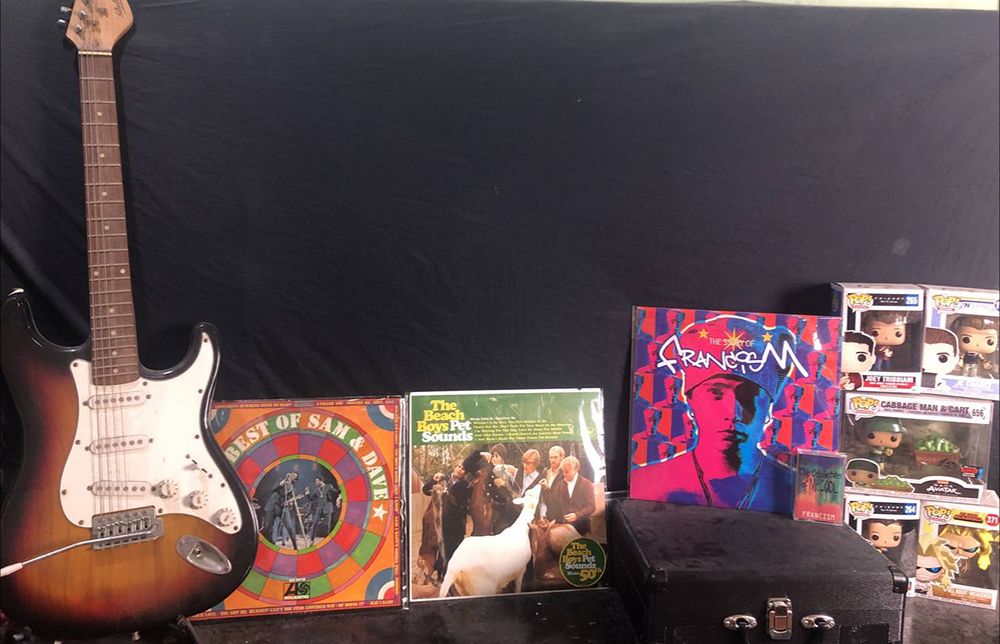 Not that he’s a pop snob — he admits to being a huge ‘NSync geek. But come high school, he became known as the guy who would lug around a guitar everywhere.

“I wanted to be like a Filipino John Mayer,” he said, laughing. “That was the dream for the longest time.”

When he got to college, though, he realized with a sinking heart that he was perhaps a little less talented than he thought. Feeling discouraged at first, Racela quickly realized that he still wanted to be around music. Another career path opened up before him when he joined Magic 89.9’s Junior Jock program as a college freshman.

The radio station liked what they’d heard from the gregarious young DJ.

Racela said, “Second sem [of my senior year], Magic hired me while I was still in school. I had class in the morning, tapos I'd go to my show on radio, 12pm to 2pm, tapos balik akong [school] cause I had two more classes to take.” 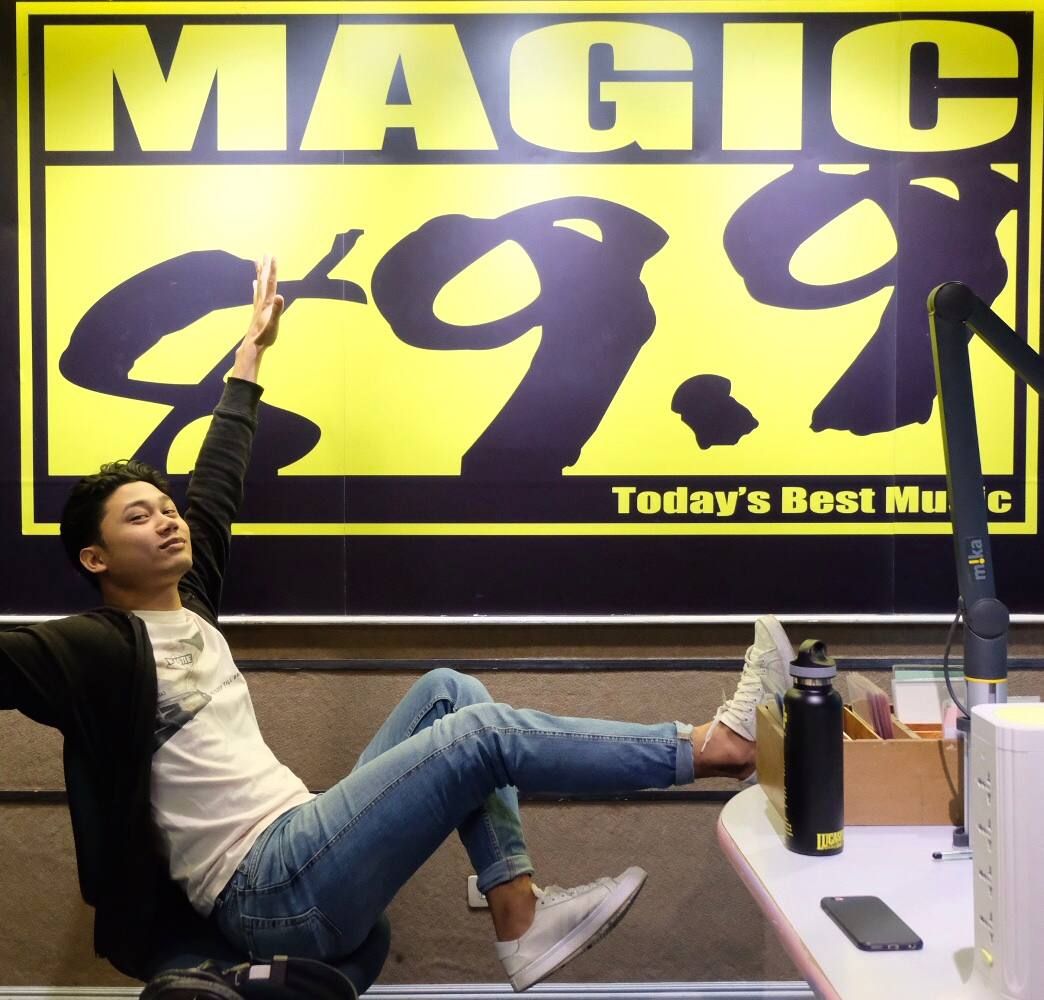 Up to now, six years after his Junior Jock days, he still does shows for Magic. Among his favorite gigs is interviewing musicians, where he can flex a little of that love for music he’s accumulated over the years.

“I still wanted to be around music being made, and music being played, and I think the music background really [helps me],” Racela explained. “ When I interview artists, there [are things] that I notice that [other] people don't notice when they do interviews.”

Take Racela’s latest interview, with actor, musician (and sometimes, Mobile Legends player) James Reid. Talking to the actor just this month, Ryan pointed out something his sharp ears were able to pick up from the smooth beats of Reid’s latest single “Soda.” True to its name, Racela said, Reid had inserted the pop-and-hiss of an actual soda can being opened in the track.

Radio remains close to Racela's heart. He even told SPIN Life, "A lot of people would say, laos na yung radio. [But] no matter what you do, as long as people are in cars, radio's not gonna die."

But in 2020, many of his radio gigs dried up as the pandemic hit the country hard. Like many other Pinoys (numerous PBA players included), Racela decided to take advantage of the lockdown downtime and try his hand at vlogging.

“I noticed na rin kasi there's such a lack of diversity in terms of content, locally,” he said, explaining why he decided to set up #RyanRambles. “It just a lot of mga artista vloggers blogging about their lives, or pranks. So I wanted to do something that was different.” 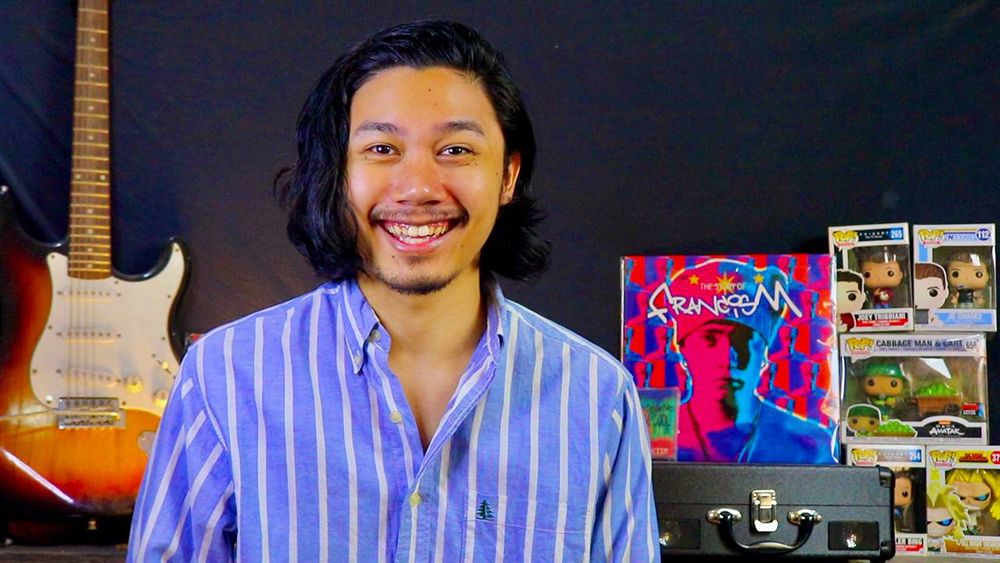 Different sounds about right. With its musical tagline of “Let’s get ready to raaaaamble!”, Racela plumbs the far corners of Pinoy pop culture. One week, he’ll be ripping apart the Tagalog accents in the TV series Lucifer; the next, he’ll be giving his thoughts on Ez Mil, or the Dota anime Dragon’s Blood on Netflix.

There’s even one episode where he watches the entire movie Bagets with his mom Melissa, the two of them commenting on Herbert Bautista’s tighty-whities side-by-side.

With the vlog coming up on its one year anniversary, Racela reflected on how much his radio experience helped him ease into the vlogger life.

It’s not just about the voice training, he said. “Another one is thinking on the fly. Sometimes, I don't know what the heck I'm gonna say when I'm on the mic. But as soon as I see the recording button turn red, eto na. [Those] five years of training? It comes out.”

#RyanRambles is no content juggernaut, by any means. Its most popular video is the one about Disney animated flick Raya and the Last Dragon, which got close to 15,000 views. But some other videos struggle to break into three digits.

“I'm almost a year into this, my subscriber count isn't that high, I have some videos din na parang less than a hundred views,” he said. “But [I talk] about [things] I really love: movies and music. I don’t get tired talking about it. For me, it’s fun! It’s fun to create these videos.” 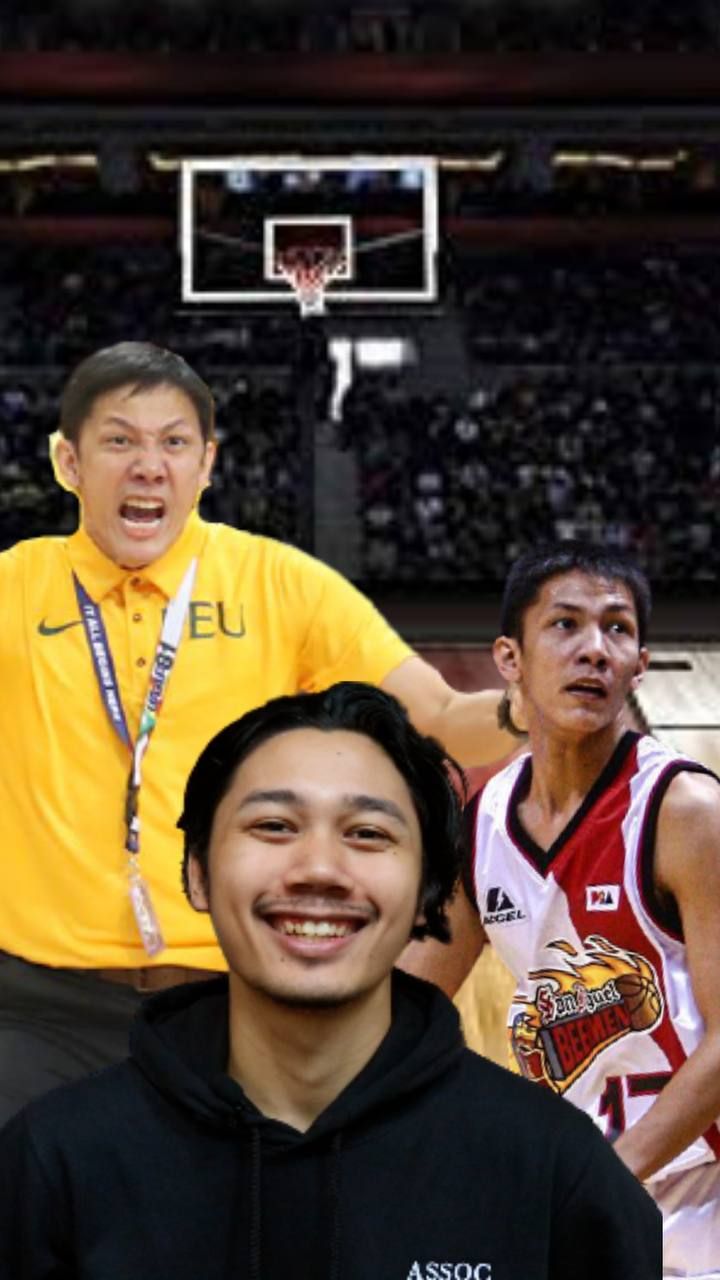 For fellow content creators who are still struggling, he offers this advice: “If this is something that you really want to do, keep doing it.”

It all ties back, after all, to the advice his own father gave him. He was talking about basketball of course, but it could apply to any passion you have in life, really.

And Ryan knows his father’s got his back, no matter what.

“I think that's what he wanted from all of his kids. Find something you love and figure out how to make it into a job. So I found a way to make a living out of it. It’s something he’s very supportive about.”