On April 11 — Almost a month into the Luzon-wide enhanced community quarantine — Ian Saguan, the president of the La Union Surf Club, posted a picture of an empty San Juan street.

In beachside surf towns like San Juan, tourism keeps the local economy afloat. A 2015 census showed that service and sales workers make up 23.27 percent of the town's workforce. Moreover, many surf instructors are part of the informal economy, their livelihoods dependent on the high summer season as the crush of tourists sign up for lessons.

Now, with restricted travel and military personnel manning boundary checkpoints, the tourists have dwindled to almost nothing.

As a surfers’ association in Siargao, another popular surfing town in Mindanao, put it: “The nationwide shutdown caused by COVID-19 has left our surf instructors workless for more than a month now.”

A picture from the Philippine Information Agency shows the strange emptiness of Urbiztondo Beach. Normally, at a weekend in peak summer season, this would be packed. Instead, with businesses shut down and surfing prohibited by the local government, almost no people can be seen in the picture. 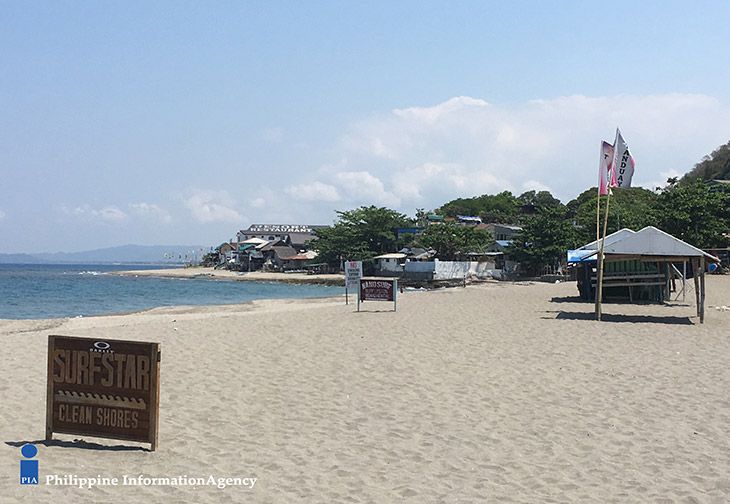 With little to no tourism income and many residents in San Juan unsure of their future, local surfers and resort owners have mobilized to help out the community.

When SPIN Life got in touch with Saguan, he was in the middle of packing the seventh batch of relief goods that his organization would be distributing to families across San Juan.

Instead of their usual annual team building, Saguan proposed that they instead buy groceries for the community.

In three days, “we got everything repacked at the same time distribution na kami agad.”

Initially, all funds came from the association’s own money. A week later, as people got word of the project, others began chipping in, including the San Juan Resort, Restaurant, and Hotel Association, as well as surfer friends from other cities and even abroad.

On April 14, Saguan posted a photo on Facebook, saying that 2,500 kilos of rice and 50 kilos of beans had arrived at LUSC, ready for the club’s “quaranteam” to repack and distribute.

Among this quaranteam? SEA Games medalists Daisy Valdez, an auditor for the LUSC, and Jay-R Esquivel, who helped during repacking and distribution.

Valdez told the Philippine Information Agency’s Anne Hazel Fajardo-Flores: “We are very overwhelmed [by] the support that our community receives and we will be forever grateful to our donors.”

The beans and rice joined the other relief goods that LUSC had been preparing since the start of ECQ. According to Fajardo-Flores, these include canned goods, noodles, eggs, and cooked meals.

These goods went to families all around the town, which has a population of around 37,000, according to a 2015 census. Around 11 percent of the residents are senior citizens.

While these relief goods will be very helpful in alleviating the current condition, Saguan is worriedly looking toward the future.

“Worst ever to na crisis sa surfing industry and I’m sure hindi lang dito sa San Juan,” he declared to SPIN Life. Even if ECQ is lifted, Saguan thinks that it will take some time before tourists return to surfing.

LUSC is encouraging its surfers to look for other sources of livelihood.