ALEX Eala is on fire.

The Pinay ace, who will turn 16 this year, has been steadily racking up the wins to ring in 2021, winning her first-ever pro berth just this week before plunging headlong into another tournament. As of writing, she’s about to embark on the third leg of the W15 Manacor in Mallorca, Spain.

Tennis has defined the life of this young netter ever since she was a little kid. (The trophies then were much taller than her.) Here’s a running timeline of her career so far. 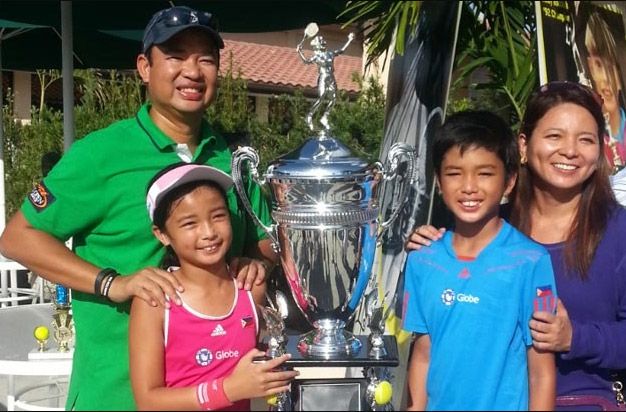 Eala first started training for tennis at the age of four, before joining her first tournament two years later.

But major press coverage for her career appears to have begun in 2013.

In April, she tops the 10-under category in the Truflex championship series in Cebu, besting Hong Kong’s Chul Kei-leun. (Future 2021 foe Adithya Karunaratne also participates in that tournament, nabbing the girls’ 12-and-under and 14-and-under trophies.)

In December, the eight-year-old flies Stateside to complete her grand slam for the Little Mo international tournaments, emerging as champion of the girls’ 8-and-under category. Older brother Miko is a runner-up in the boys’ 11-and-under.

In Croatia, Alex wins the Dubrovnik Dud Bowl Championship for 11 and under girls.

In an interview with The Asian Parent Philippines, her parents Mike and Rizza say that both their children constantly join international competitions.

“There are many who will congratulate them when they win. However, if they lose, we want to be there to help them process the emotional dip and to get them through it with new motivation to learn from their match,” they said.

Alex ranks #1 in the Asian Tennis Federation. Together with Indonesia’s Priska Madelyn Nugroho, she is awarded as Doubles Player of the Year by Tennis Europe. 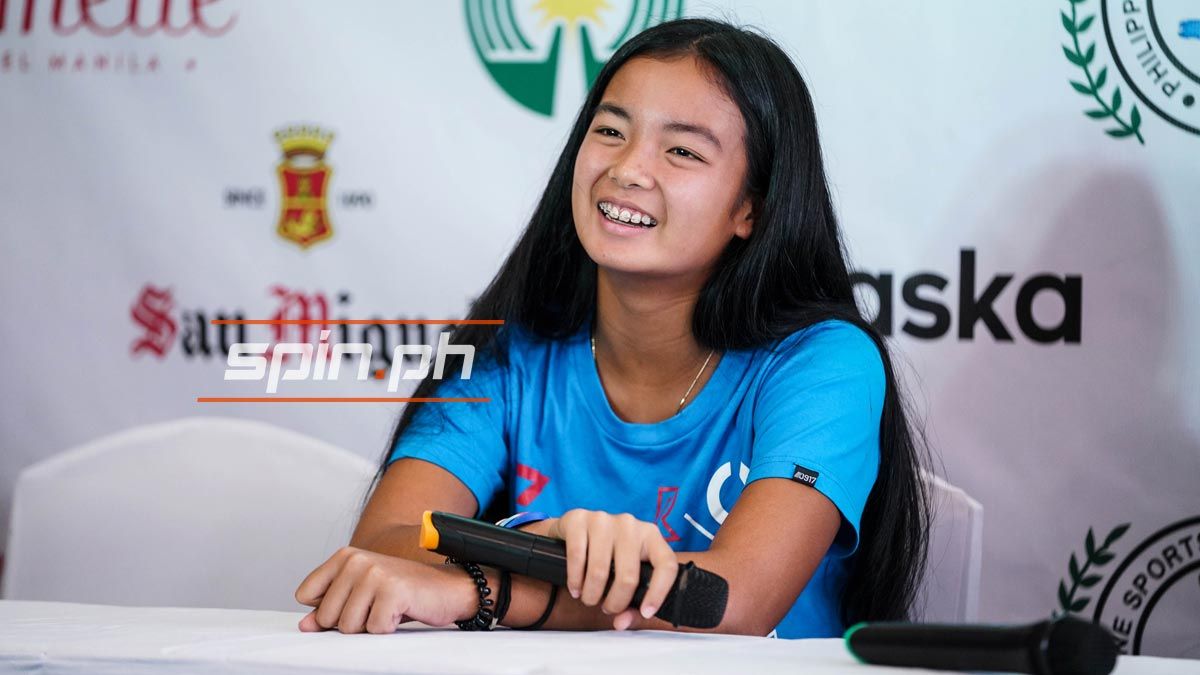 Eala opens the eventful year with a victory in France.

Joining the Les Petits As-Le Mondial Lacoste as a wild card participant, Eala defeats the Czech Republic’s Linda Nosková in the finals to become the series’ first wild card champion ever. Impressed, the French Tennis Federation grants her a wild card in the qualifying of the 2018 Roland Garros Junior French Open. There, she loses in the second round against USA’s Peyton Stearns.

In July, she also enters as a wild card in an ITF Jakarta U18 tournament. She emerges second runner-up to Priska Nugroho.

But in Alicante, Spain, in October, she finally wins her first U18 title, carving her way through the ITF G5 tournament without dropping a single set and besting home bet Jessica Bouzas Maneiro.

In her home turf, the eight-seeded Alex routs Canada’s Dasha Plekhanova in a G4 tournament held in Makati in November. In the second edition of the tournament, though, she bows to Indonesia’s Janice Tjen.

This was the year that she also joins two Tennis Europe tournaments, as well as the Duren tournament in Germany and the Hasselt tournament in Belgium.

She was awarded as 2018 Overseas Player of the Year by Tennis Europe.

Crucially, it was her January win in Les Petits As that got the Rafa Nadal Academy to sit up and take notice. Both she and Miko receive a scholarship offer for the prestigious tennis institution in Mallorca, and the siblings enroll in the later part of the year.

This is a year where Eala gives the country a pair of historic firsts.

In April, she propels the Philippines to its first berth in the ITF World Junior Tennis for the first time in 26 years after defeating Hong Kong, 2-0, in the quarterfinals of the Asia/Oceania qualifiers in Kuala Lumpur.

In September, Alex makes her debut in the main draw of the US Open Junior tournament, becoming the first Filipino to qualify for a Grand Slam tournament since Jeson Patrombon, who accomplished the feat in 1991. She has a smashing debut against Australia’s Annerly Poulos (6-1, 6-2), but her run is nicked in the bud by Thailand’s Mai Napatt Nirundorn in the second round. 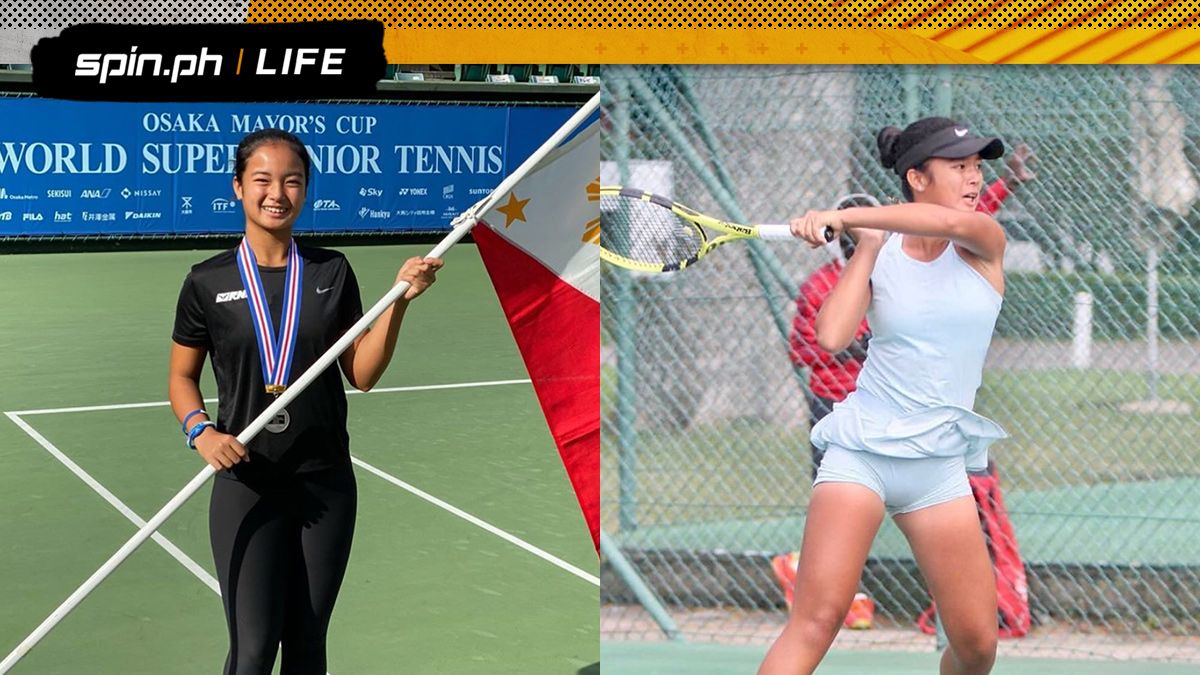 That same month, she makes two pit stops in South Africa: one for an ITF Junior Grade 2 tournament in Stellenbosch (South Africa), and then, shortly after, a Grade A tournament in Cape Town. The latter proves to be a big moment for her — Alex emerges champion in the singles division, defeating Czech Linda Fruhvirtová, and hits the semifinals with doubles partner Elvina Kalieva (also of the Rafa Nadal Academy).

Another Grade A tournament awaits Alex, but this time, in Osaka. However, France’s Dianne Parry overpowered her in the finals in straight sets.

Eala, however, ends the year on a high note. Together with partner Evialina Laskevich of Belarus, they conquer the doubles competition at the Orange Bowl International Tennis Championships in Florida. 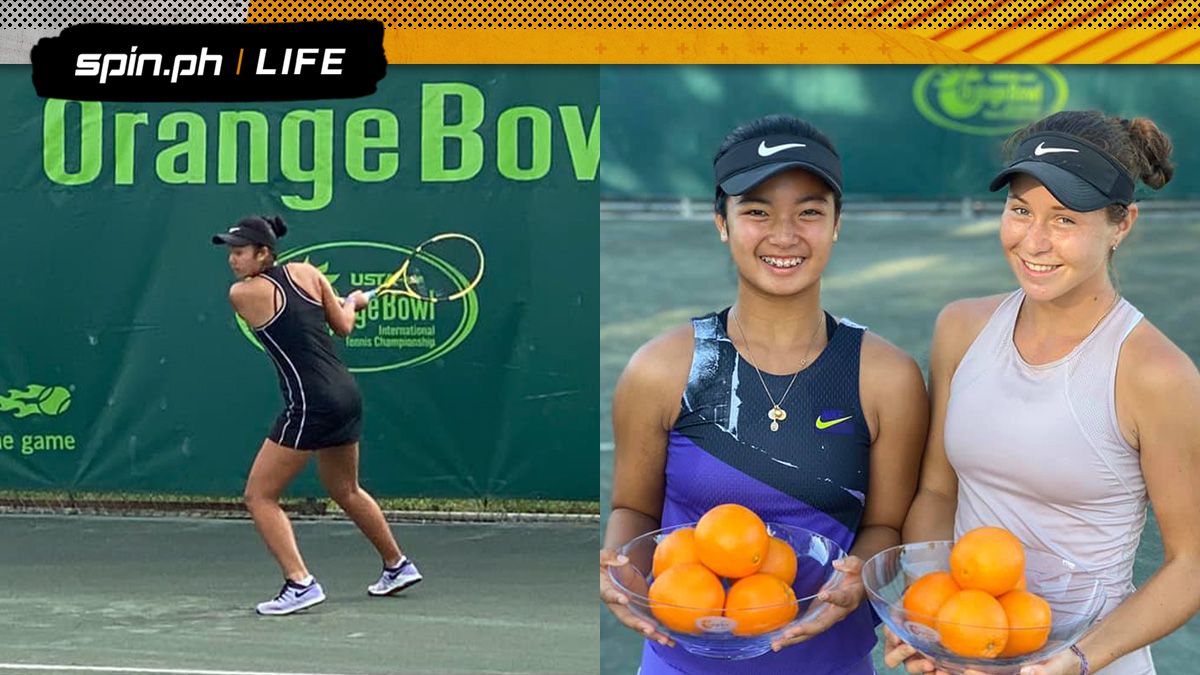 It’s good news right away for Alex as 2020 begins — she finally cracks the top 10 in the ITF World Juniors rankings, with the world tennis federation granting her rank #9. She’s the highest Southeast Asian on the list.

Alex secures a spot in the main draw of the Australian Open juniors championships. There, she wins her first Grand Slam title, as she and longtime partner Priska Madelyn Nugroho slice through the competition, besting Ziva Falkner and Matilda Mutavdzic in a 6-1, 6-2 finals.

This is the first time a Filipino has won a Juniors Grand Slam title since Francis Casey Alcantara back in 2009, who also won a doubles crown. 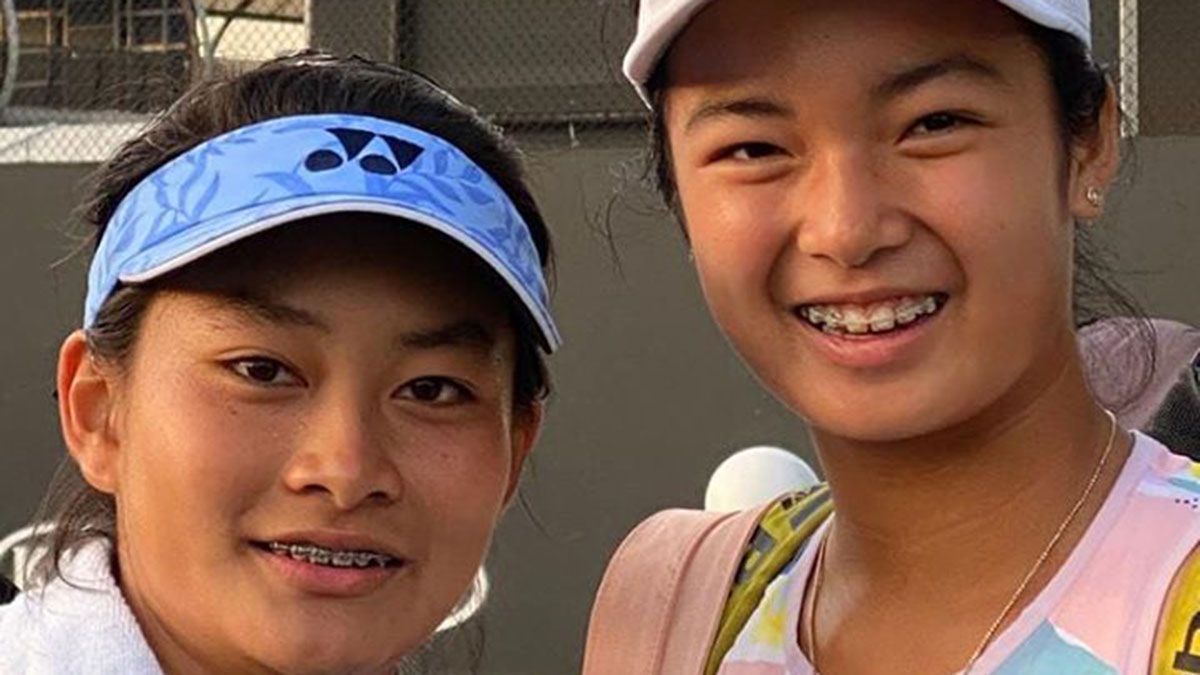 After her stunning victory, Eala rises to juniors world rank no. 4.

In short order, she enters her first ITF pro competition in Tunisia, but falls in the second round. Before she can join her second pro tournament, also in the North African country, the global pandemic hits, and the Rafa Nadal Academy recalls all its scholars to Spain.

Safely ensconced in Mallorca, Eala continues her training, despite the uncertainty of the situation.

In October, Eala emerges again in the world stage, this time, in the French Open Juniors. She reaches the semis, losing out to hometown bet Elsa Jacquemot. Still, her performance is enough to propel her to the world juniors rank no. 2. 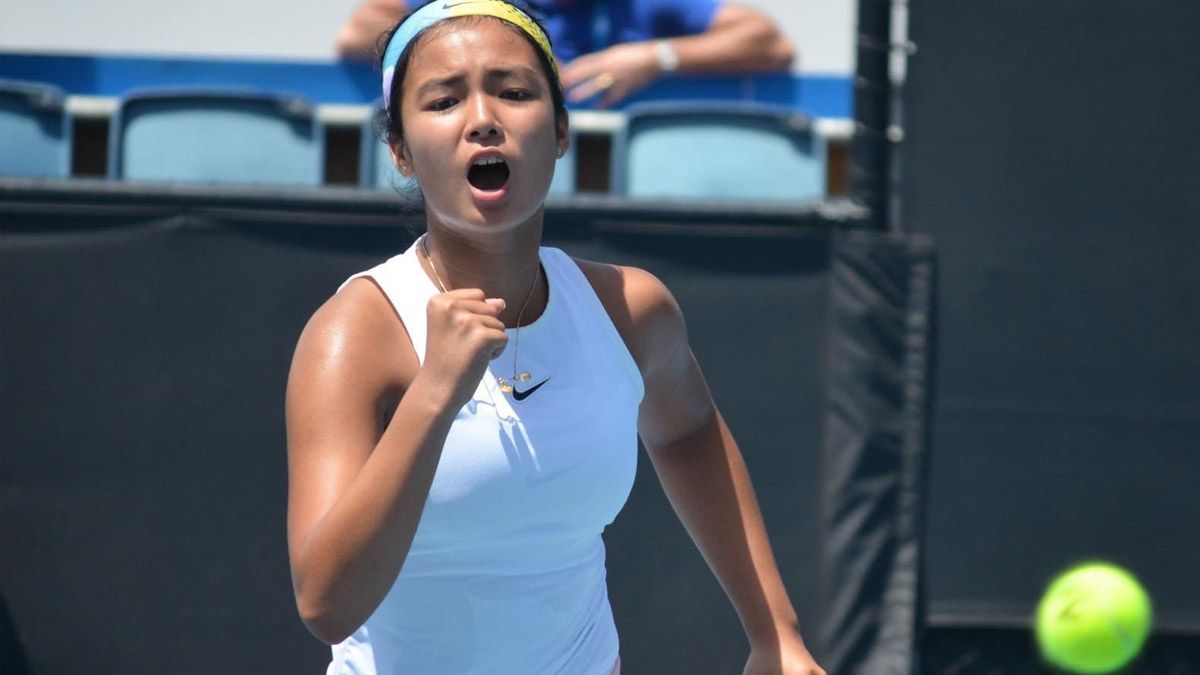 It is the most spectacular tennis achievement by a Filipino since 1985’s Felix Barrientos, who also reached the semifinals of the boys juniors at Wimbledon.

Controversy briefly flares up in the wake of her historic achievement when the Philippine Sports Commission claims that it backed her French Open campaign with financial support, to the tune of P3 million.

Still, Alex continues her campaign in the pandemic year with two more tournaments, the Castellon Pro and the Las Palmas de Gran Canaria, before finally getting to go home to her family for the holidays. 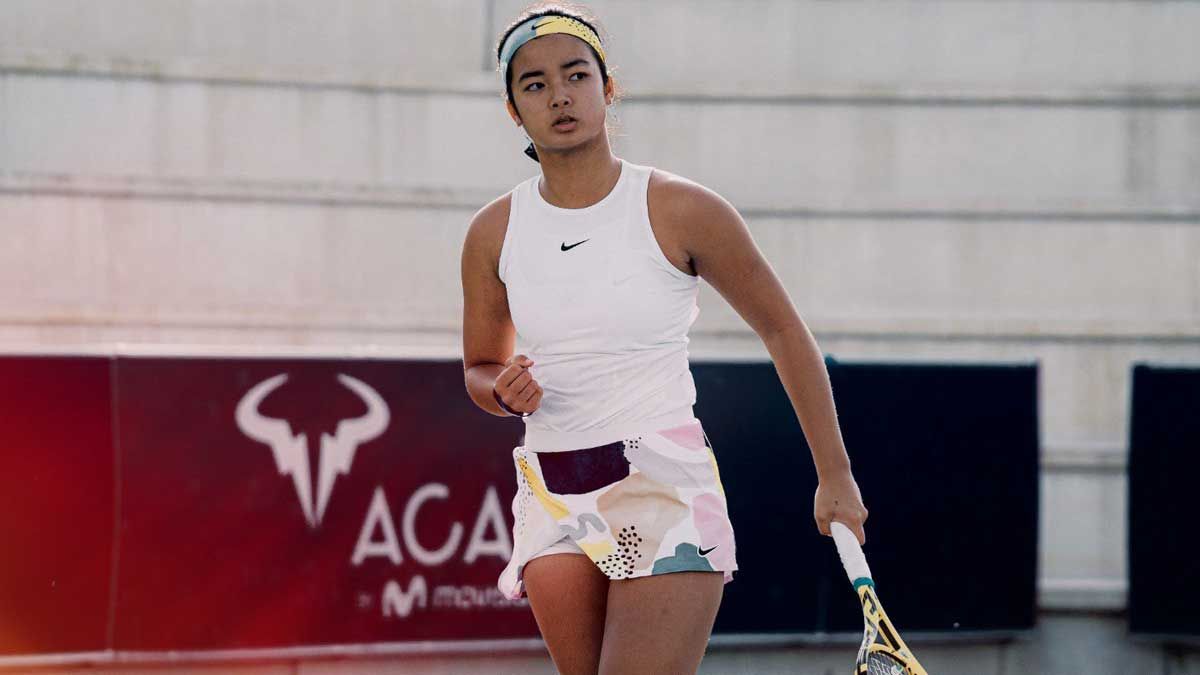 Alex Eala starts off the New Year strong with her first ITF pro title, besting Spain’s Yvonne Cavalle-Reimers at the end of January.