UAAP athletics MVP Richard Salano and elite triathlete Monica Torres ruled their respective 21K races in the first leg of the Run United series at the Mall of Asia on Sunday morning. 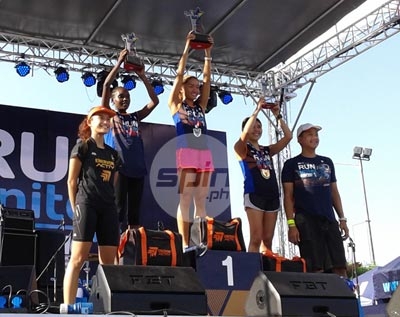 Aside from trophies and medals, winners were also given cash and gift packs from sponsors.

“Two days after the start of registration, the 21K race slots were all taken already. And two weeks before the race date, registration for 10K slots was also closed. While there is clamor for more slots, we always stick to our target number of participants to ensure a better quality and safer race,” said Rio dela Cruz of race organizer Runrio, who also celebrated his birthday.

Another popular feature in the race were the issued singlet’s which are sweat-activated when the athlete perspires, the latin words “Citius (Faster), Altius (Higher) or Fortius (Stronger)” will appear on the shirt’s back and are derived from the Olympic Motto.

“We can see they are seriously taking up the challenge, given the results of our first run race this year,” said Alex Panlilio of Unilab Active Health.

Organizers said 30% of the runners were female, a sign that more women are taking up running as a part of their health and fitness regimen.

Portions of the race registration fees were used to fund a satellite health clinic project in Caloocan City by Gawad Kalinga.

The band Parokya ni Edgar performed for the runners after the race.

Run United 2 is scheduled on June 1 at the Mall of Asia and Run United Philippine Marathon on October 5 at the Bonifacio Global City-MOA.