Carfrae’s participation was officially announced at a press conference in Bonifacio Global City. It will be her first race in the Philippines and will be the first time that a reigning women’s Ironman World Champion will be racing in the country.

She will share the starting line with other pro athletes, Filipino elites, and age groupers, providing participants a chance to race alongside the multisport celebrity.

The 34-year old Australian’s triathlon career started when she represented Australia at the ITU Triathlon World Championships from 2001-2005, where she bagged silver medals in the years 2002 and 2003.

In 2009, she landed in second place in her first ever appearance at the Ironman World Championships in Kona, Hawaii – considered the most prestigious triathlon event in the world.

Since then ‘Rinny’ has landed in the podium in all her appearances at the World Championships. In 2010, she dominated the women’s field and took first place, repeating this feat in 2013 and 2014. She owns the Ironman World Championship women’s course record at 8:52:13 and women’s marathon run record with a time of 2:50:38.

On top of her athletic athletic career, Rinny is also involved in chartable initiatives such as the programs of World Bicycle Relief, which aim to provide bicycles to residents of rural Africa and connect them with education, healthcare and economic opportunites.

She brings this same charitable heart to the Philippines as she will help launch the Batang Tri Grassroots Program, a program that aims to fight poverty in the Philippines and Asia through multisport.

The Batang Tri Grassroots Program is an initiative of CEO and president of F&F International Events Group, Inc. and restaurateur Raymund Magdaluyo. It started as a small-scale CSR of the Blackbeard’s Seafood Island Group in partnership with coach Jojo Macalintal, where a portion of the proceeds from the sales of the ‘Jomac Boodle,' a meal created by coach Jomac, is used in buying bicycles for young individuals that want to enter the world of multisports but lack the financial means.

This year, Batang Tri Grassroots Program is set to expand as coach Melvin Fausto of the Triathlon Association of the Philippines and Carlos De Guzman of SwimBikeRun.ph join Raymund Magdaluyo and Jojo Macalintal to combat poverty through the help of multisports. The program aims to acquire more bicycles and funds for different training programs for deserving youth.

One hundred slots for the Bataan International Triathlon will be made available to the public, with part of the proceeds directly going to the Batang Tri Grassroots Program. 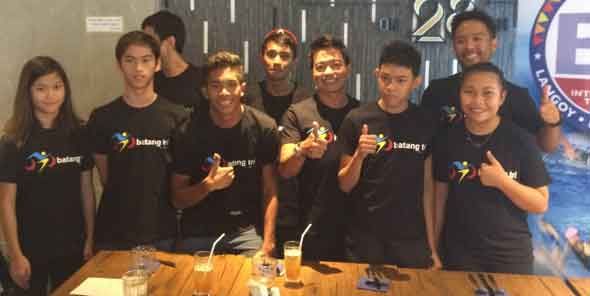