AFTER finishing fourth in the 2015 North Face 100 Philippines 50-kilometer distance in Nuvali, Jan Nilsen took care of unfinished business in his return to the country by winning the race’s premiere 100 km category.

SPIN.ph caught up with the soft-spoken Scandinavian shortly after the race, where the Thailand-based Nilsen shared his experiences in what's considered as one of the toughest trail running races in the Philippines.

The 49-year old seaman bared he 'was kinda sick' in last year’s TNF but managed to use a one-year break to improve his performance for this year’s race.

Jan Nilsen: Training. A lot of elevation. I have been in the Philippines for a month now, (I’ve) done a few races in a lot of mountains. Kayapa for the Four Legs. Mankaya. Camiguin. I’ve done Mt. Arayat. I did Catigadin. So I’ve been around.

JN: It was hard effort all the way. From the turnaround point, the long uphill there, I got a couple of minutes fighting all the way to the end. I could see champion distance guys behind me along the long ascent. (It was) just a gritty performance!

SPIN: What was the most difficult part of the race?

JN: The start! That was total chaos. And the down and up to the turnaround point (at Camp 1 in Kennon Road which was a steep path of 12 kilometer, both ways).

SPIN: Was the weather a big factor?

JN: I was happy it was cloudy here and there. I was a bit more concerned with the lower elevation near the end. I did a race a couple of weeks ago and got really bitten by the heat so I was happy it was a little bit cloudy (on raceday).

SPIN: We find it amazing that a Scandinavian, who hails from a colder climate, did so well in a race like this.

JN: I’ve been living (in Asia) for more than 10 years and getting used to it but I always struggle with the heat anyway. I am based in northeastern Thailand.

SPIN: Are you a frequent visitor to the Philippines?

JN: Yes. I’ve been here many, many times. Really, really nice people. Nice mountains and beaches. I love it here!

SPIN: Do you engage in other sports aside from trail running?

JN: Only trail running. I cannot run on the road. I have very sensitive Achilles (heels) and (road running) is boring!

SPIN: What do you do for work?

JN: I have taken a year off now from work. I was tired of working. Now it’s (full-time) trail running and taking care of the family at home. I am a seaman. I am driving a ship in the oil business.

MEDIA: How would you improve the next TNF100?

JN: The organization (of the race)! They should involve some runners when planning the race. Because this out and back in the beginning was complete chaos. In the briefing, there was no information about this. We were running on very narrow single tracks and were following the tracks in the beginning. Then we were coming to a turnaround point and then they start coming back, now there’s people turning back because they did not know what would happen. When we started coming back, because we were in the front, we were meeting 200 other runners so they started to turn around before coming through because there was no information and it was very narrow.

MEDIA: What made you decide to come back for TNF100?

And being 'King of the Mountain,' we're pretty sure he will be back to defend his crown in Baguio next year. 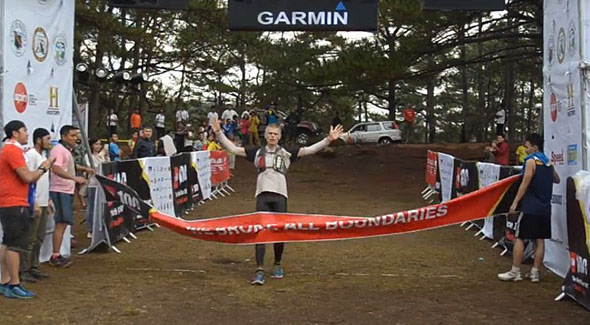