The most memorable moments from Kobe, Gigi Bryant memorial

LOS ANGELES — Memorable moments from inside the memorial for Kobe Bryant and his daughter Gianna.

Practically everything about what would happen at Kobe Bryant’s memorial was a mystery to nearly everyone watching, and when Beyoncé took the stage to open the celebration of life, a gasp went up among the until-then subdued crowd at Staples Center in Los Angeles. The big screen in the arena soon showed that many major entertainment figures were in the audience along with the expected NBA stars, including Jennifer Lopez, Kanye West and Kim Kardashian.

The memorial’s other musical moments would provide their own surprises. A harp and grand piano that a scrambling crew set up on stage between speakers led to speculation about who else would perform. The harp accompanied Christina Aguilera as she sang “Ave Maria,” a nod to the Bryant family’s Catholic faith and to Kobe Bryant’s Italian upbringing. The piano was for Alicia Keys, who used it to play Beethoven’s “Moonlight Sonata,” which the crowd had just learned the usually non-musical Bryant had learned to play for his wife’s wedding anniversary. 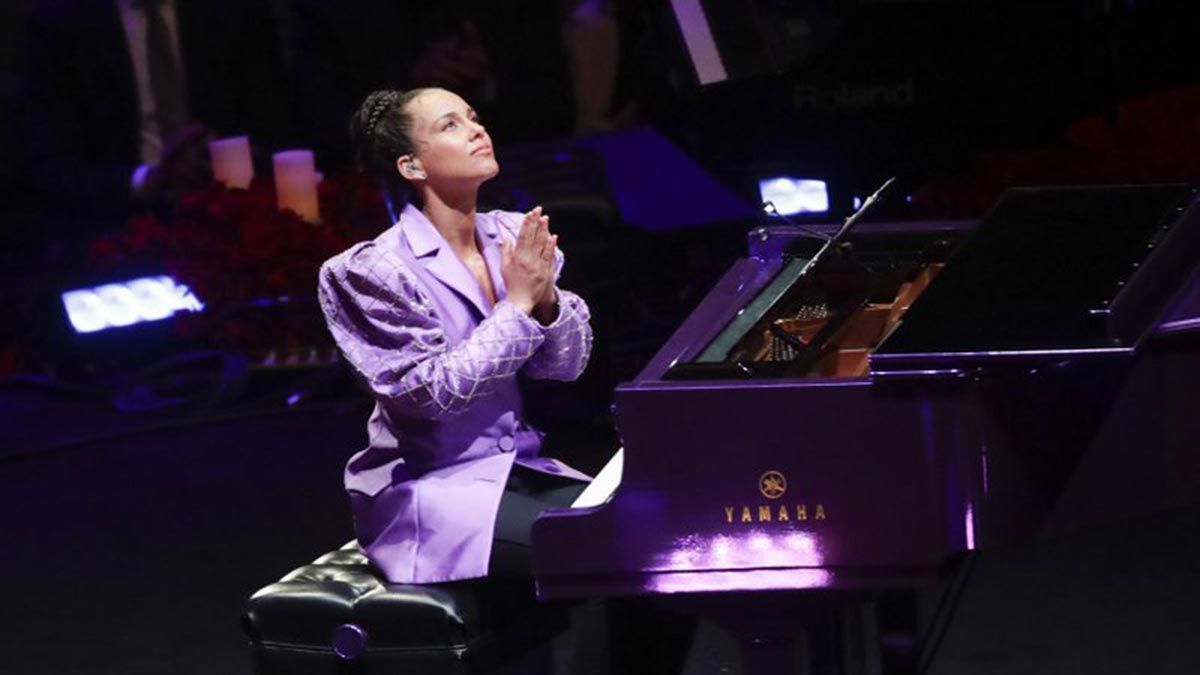 The crowd was more perplexed than surprised moments after Beyonce’s polished opening when the Staples Center announcer said a “good friend of the Bryants and the Lakers family is here to help guide us through this morning’s celebration,” and introduced not a priest or pastor, but Jimmy Kimmel. The late-night host, professional prankster, and sometime Academy Awards emcee agreed he was an odd choice, but his shaken, tearful delivery set the tone for the deep emotions that were to follow. “You picked the wrong person to guide you through, I’m going to tell you that right now,” a choked-up Kimmel said.

Even more tears came as he listed the names of the nine killed in the helicopter crash, and he was practically weeping when he said of Kobe and Gianna Bryant, “everywhere you look you see his face, his number, Gigi’s face, Gigi’s number.” He drew laughs from the tears when he said those places included ”Boston, for God’s sake. In places where he would be booed on the court, Kobe was missed. Even the great Boston Celtic Bill Russell (who sat nearby in the crowd) wore number 24 and a Lakers jersey to yesterday’s game. I knew he would come to us eventually.” 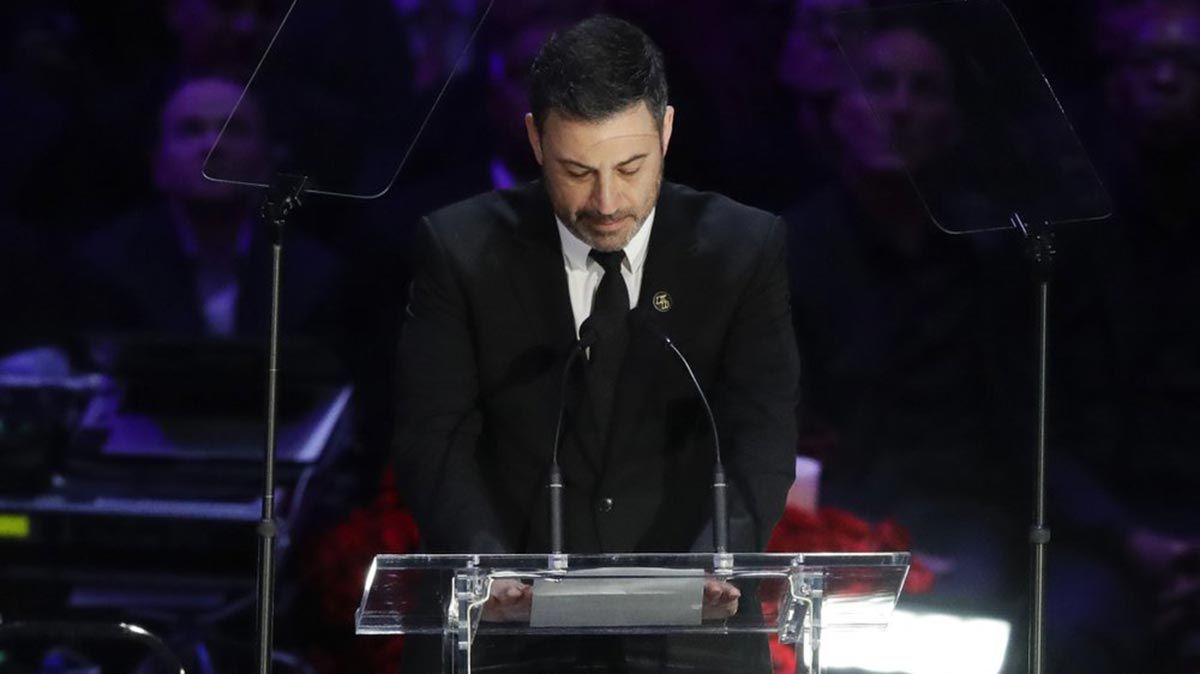 A DAUGHTER, AND A FUTURE, LOST

Vanessa Bryant would soon take the room to new depths of emotion as she paid tribute to the 13-year-old daughter and the husband she lost. Deep silence ran through the crowd of some 20,000 at Staples Center, broken only by sniffs that came even from the usually emotion-free press section of the arena, as she described the imagined future a mother would never know for her child. “We will not be able to see Gigi go to high school,” Vanessa Bryant said, her voice breaking. “We didn’t get the chance to teach her how to drive a car. I won’t be able to tell her how gorgeous she looks on her wedding day. ... Gigi would have most likely become the best player in the WNBA. She would have made a huge difference for women’s basketball.”

TAURASI AND IONESCU, KOBE AND GIANNA

Everyone expected to see and hear from legends of the NBA game, but giants of the women’s game showed viewers how much this side of basketball also shaped Bryant’s life as he coached Gianna’s team and fueled her future career. Both WNBA all-time great Diana Taurasi and collegiate all-time great Sabrina Ionescu said they learned and used Kobe’s signature moves. “He taught me his step-back, he told me that if I could bring that to my game it would be over for any defender trying to guard me." 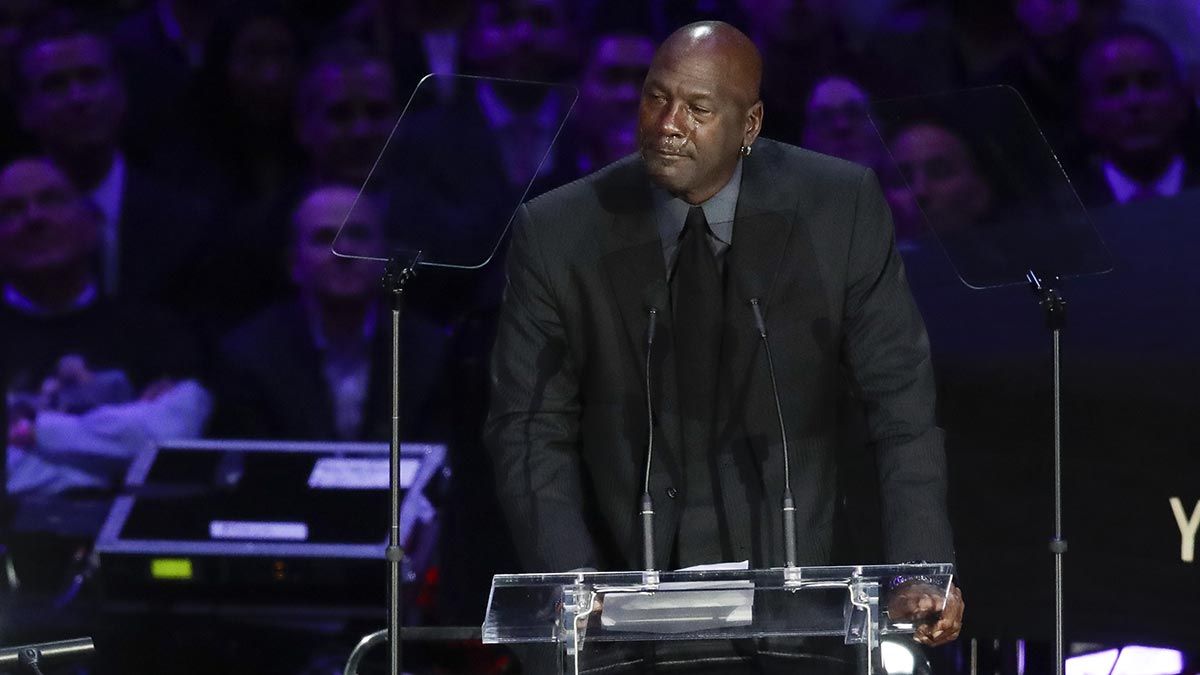 A STAR AMONG STARS

Even in an arena loaded with superstars from sports and entertainment, Michael Jordan taking the stage left the audience awestruck. The crowd had been growing a little restless after an unbroken string of speakers, and some headed for restroom and concession trips after 90 minutes of sitting still, but when the Chicago Bulls legend walked on to stage, Staples Center snapped back to full attention, and when Jordan was crying from his first words, the room knew it was witnessing a truly rare moment from the superstar.

He even acknowledged that his tears invoked the photo meme that dominated social media several years ago. “Now he’s got me,” Jordan said of Bryant. “I’m going to have to look at another crying meme for the next” and was cut off by laughs and howls from the crowd. 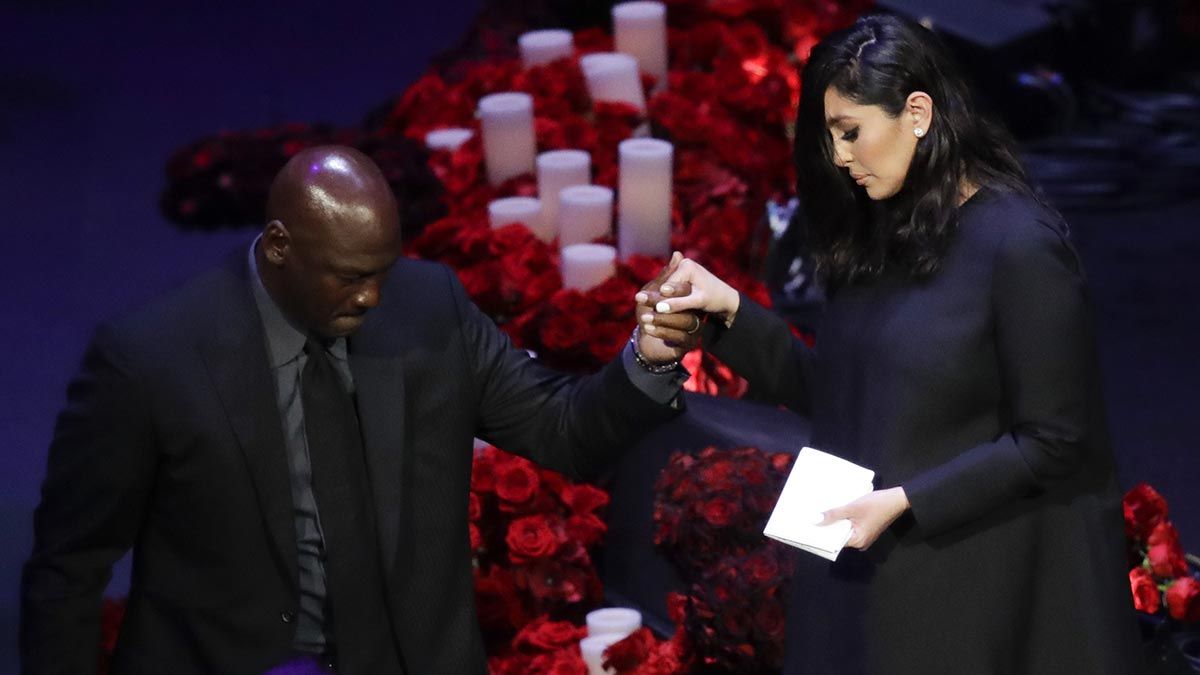 BRYANT’S LAST TEXTS FROM THE AIR

Kobe’s best friend, former agent and current Lakers General Manager Rob Pelinka had the crowd riveted when he described the last messages Bryant sent him, moments before the helicopter crash that killed him. Pelinka said he was in church and Bryant was in the air when Bryant texted him to ask if he knew a baseball agent who could help a hard-working, ambitious girl get an internship. The story took a truly touching twist when Pelinka revealed that the girl was Lexi Altobelli, the surviving daughter of John Altobelli, who died in the crash with Bryant.

“Kobe’s last human act was heroic,” Pelinka said. “He wanted to use his platform to bless and shape a young girl’s future.”

It was not clear when Shaquille O’Neal took the stage that he would be the final speaker, but in retrospect it could not have been more fitting that the man whose name will always be tied to Bryant’s went last in the building where they built their legacy together.

The always playful Shaq showed why he and the refined, serious Bryant were such an odd couple. “Sometimes like immature kids, we argued, we fought, we bantered or insulted each other,” O’Neal said. But, he added, ”when the cameras were turned off we threw a wink at each other and said, ‘Let’s go and whoop some ass.” And he showed Bryant wasn’t above having the occasional outrageous moment himself. He recalled an early conflict with Bryant, who wasn’t passing as much as O’Neal would’ve liked. O’Neal said he told Kobe: “There’s no ‘I’ in team.” Kobe responded: “Yeah, but there’s an ‘M-E,’” followed by an F-bomb that broke the somber tone and made the crowd roar.