Surprise! These two have been the most effective players of the SMB-TNT finals so far

Not everyone is a fan of basketball analytics, but most of the time numbers provide the best explanation for everything that happens on the court.

Take the ongoing 2019 PBA Commissioner’s Cup Finals between the TNT KaTropa and the San Miguel Beermen, for example.

The latter recently evened the series at two games apiece, although it’s quite clear which team has been better so far. A closer look at the cumulative plus/minus (+/-) rating of each major player from both squads throughout their first four games will give us an idea of what it takes to score a quality win.

The traditional plus/minus statistic is used to gauge a player’s in-game value, particularly the point differential between his team and the opponent’s scoring when he’s on the floor. Basically, Player A’s +/- rating increases with every offensive field goal, the same way an opposing conversion decreases it. In an era where a new type of metrics is regularly introduced, it’s still the simplest method to measure how a player maximizes his minutes.

The concept of the plus/minus couldn’t be more accurate in the TNT-SMB series, which has revealed the most important player from each side.

With head coaches Bong Ravena and Leo Austria deploying short seven- to eight-man rotations, it’s not surprising that the starting units have been the story of this matchup.

The KaTropa are obviously benefiting from having Best Import Terrence Jones (+35) since the start of the conference. Continuity and familiarity have helped Jones, Best Player of the Conference Jayson Castro (+14), and TNT’s hardworking crew of talented locals sustain their collective brilliance during the elimination round.

Troy Rosario (+33) and Roger Pogoy (+32) may have had their moments in the finals, but neither has had a bigger impact on the floor than Adamson standout Don Trollano (+39).

The ex-Gilas swingman is quietly having the most efficient run among all players, despite playing almost 38 minutes per game. Trollano’s work on the offensive glass, high field goal percentage, and low turnover rate as an undersized tweener have made him Mr. Reliable for the KaTropa’s small-ball unit. 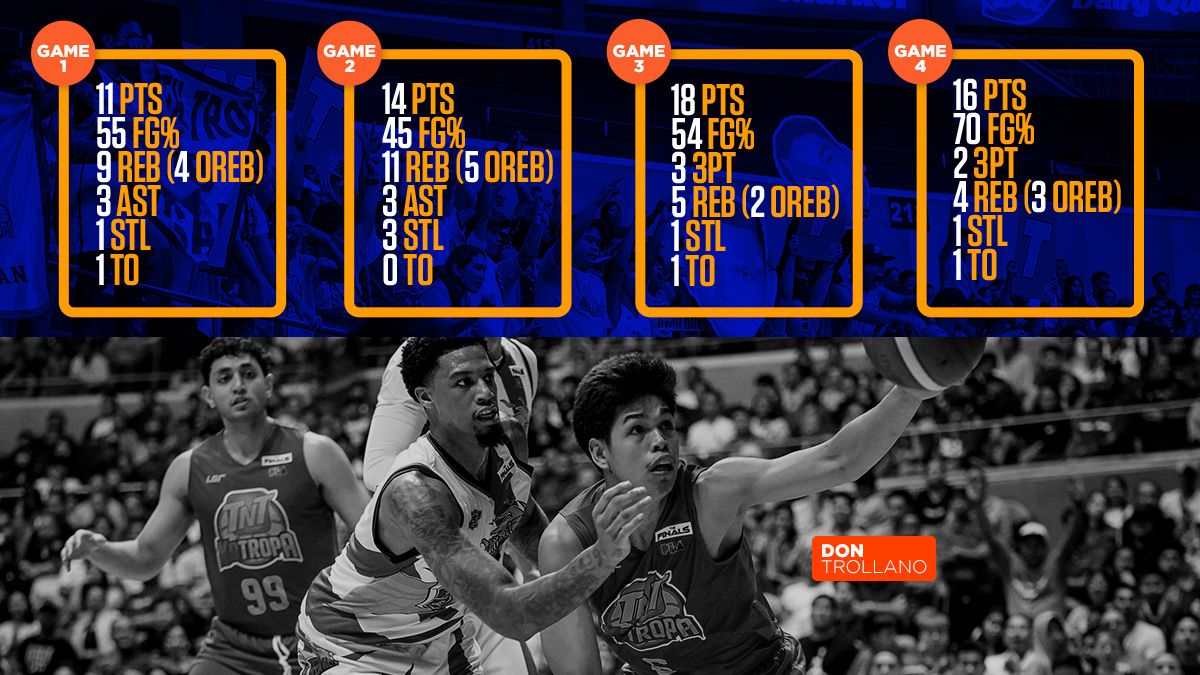 The only problem with top-heavy TNT is the next man up after its first five. Brian Heruela (-15) can only do so much with his 22 mpg, while Yousef Taha (-10) still manages to be a liability in his limited burn. Jay Washington, Harvey Carey, and Ryan Reyes make up for a loaded bench mob... if this was a decade ago. If not for their razor-thin supporting cast, the KaTropa would’ve been in full control of the series, especially when Game 2 went to double overtime without Jones and Rosario.

On the other hand, the Beermen have a deep roster outside their reinforcement Chris McCullough (-14). SMB has the luxury of starting-caliber players like Terrence Romeo (-23), Arwind Santos (-8), and Christian Standhardinger (-7) all accepting the reserve role despite their individual greatness. Having multiple options for spark plugs have proven crucial for Austria, especially with members of his starting lineup experiencing consistency and matchup issues against TNT.

Only a couple of the Beermen’s starters have a positive plus/minus — and Cabagnot (+1), the humble hero of Game 4, almost didn’t make the cut. In a team full of Most Valuable Players and Defensive Players of the Year, though, it's backup gunner Von Pessumal (+14) who has emerged as SMB's lone encouraging on-court presence based on the +/- metric. The former Blue Eagle is trying his best to slide into the role of injured sharpshooter Marcio Lassiter. After a forgettable first two outings, Pessumal has provided SMB some much-needed spacing in Games 3 and 4. 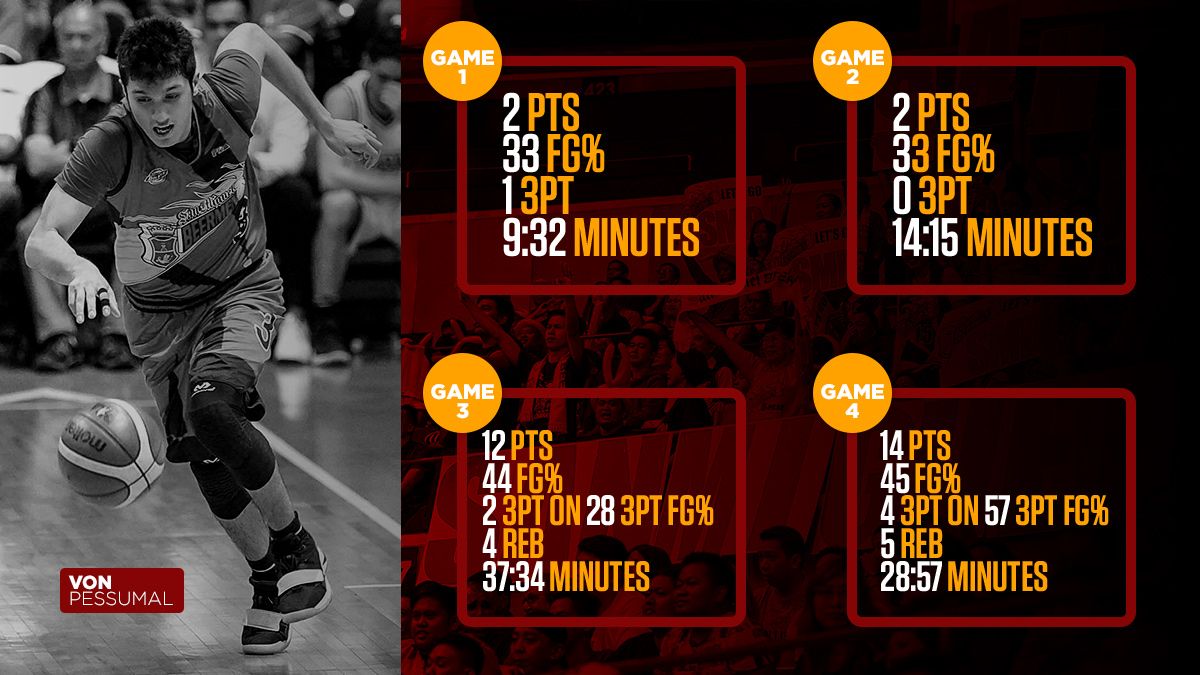 As sneakily good as Pessumal has been, Chris Ross (-31) and June Mar Fajardo (-19) have been the exact opposite. The five-time MVP is producing his usual numbers (21 ppg, 8.8 rpg) at the expense of the Beermen getting outscored with him on the floor. The same goes for the two-time Finals MVP and DPOY Ross, who has sacrificed efficiency in throwing Jones off his game. Ross’s defensive value — minus the unnecessary antics — can’t hide the fact that he has scored in double figures just once in the series.

Pessumal and Trollano aren’t the first players that come to mind when talking about the SMB and TNT’s all-out championship war. Flashier names may headline this star-studded faceoff, but none of them could match the positive influence that these two individuals have had on their squads. While the rest of their personnel are being wildly inefficient, Ravena and Austria can rely on the smart decision-making and good shot selection of their respective impact players.