HOW far would you run for your child?

For Vladimir Hernandez, it’s as long he can for Kevin, his developmentally disabled son.

During the recent Cardimax Clark Ultramarathon, SPIN.ph caught up with the father and son duo, collectively known as Team Never Run Alone, shortly after they finished their 50-kilometer race in almost nine hours.

According to the 42-year old director of a humanitarian non-government organization (NGO), he derives more satisfaction not in crossing finish lines but in seeing his son enjoy the race, particularly being around other runners and the fast pace.

Their running journey all started five years ago.

Kevin, who has cerebral palsy and autism, enjoys being taken by his dad to places such as malls and the outdoors. In 2009, they brought him to the sprawling UP Diliman where they would go on a walk around the sprawling campus.

Hernandez said he talked to Tahanan Walang Hagdan which helped him design a specialized racing chair after the standard wheelchair they used toppled during one of their early races. 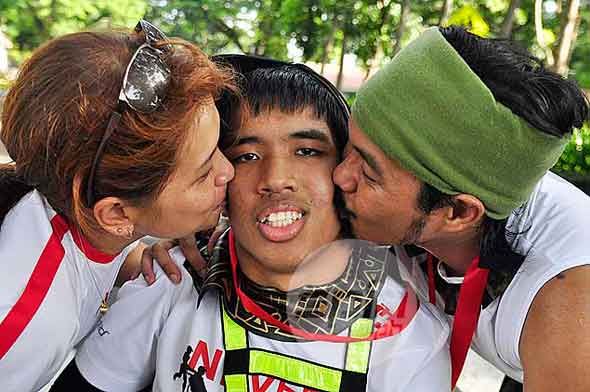 During last weekend’s run, Vladimir said his son was awake all through the race, considering it was 50 kilometers and it started at midnight. He became animated when he saw the finish line. Both men received medals and drew applause for their efforts.

Hernandez said he now runs as often as he could.

On a personal basis, the cheerful dad said he also benefited from the physical exertions on many fronts, notably his health.

But he said the most important thing is what the two of them share: “Pinakamalaki sa amin yung bonding naming dalawa.”

Apart from the joy of running, Hernandez said they also embraced an advocacy.