PHILIPPINE sports never had it this good.

Notwithstanding the struggle with COVID-19 pandemic, Filipino athletes found a way to thrive and strive in the international stage to achieve what Philippine Olympic Committee (POC) President Bambol Tolentino referred to as the ‘Golden Year’ of local sports.

From ending the country’s search for its first ever Olympic gold, producing the first Filipino to win a Major, to having the oldest bantamweight champion in the world, inspiring stories were the name of the game for Philippine sports in 2021.

While there may be some hiccups along the way, the good obviously outweighs the bad ones.

SPIN.ph takes a look back at the Top 10 stories that defined local sports in the year just passed.

Behind her massive shoulders, powerful arms, and steady legs, the 30-year-old pride of Zamboanga ended a near century of waiting for a country in search of Olympic glory by winning the Philippines’ first ever gold in the Tokyo Games. Diaz won it by dramatic fashion, beating Chinese record holder Liao Qiuyun for the gold in her final lift during the gold medal round of the women’s 55 kg event. The Filipina burst into tears when history was finally made, which she capped by establishing new Olympic records of 127 kilogram in the clean and jerk and total of 224 kilogram. Adding to the silver she bagged in the 2016 Rio De Janeiro Games, Hidilyn became only the second Filipino athlete to win multiple Olympic medals after the late swimmer Teofilo Yldefonso (two bronzes).

The young golfer had every Filipino sports fans widely awake in the early morning of June 7 when she made history by clinching the US Women’s Open Championship at the Olympic Club in San Francisco, California. In a dramatic finale, the 19-year-old beat Japanese Nasa Hataoka in a sudden-death to become the first from the Philippines to win any of golf’s major championships. The Filipina teener who idolizes Rory McIlroy, tied Inbee Park of South Korea as the youngest to win the US Open. Before the year ended, Saso disclosed her decision to become a Japanese citizen – like her father - by the time she reached the age of 22. There was no denying though, she carried the Philippine flag in her shining moment as a pro player.

The gold medal continues to elude the Philippine boxing team, but nonetheless made up for it by emerging as the most bemedalled among the Filipino delegation in the Tokyo Games. In an unprecedented campaign, the boxing squad went home with two silver and a bronze medal courtesy of Nesthy Petecio, Carlo Paalam, and Eumir Marcial. Nowhere in the history of the country’s Olympic campaign did a sport accounted for three medals in a single coverage in the quadrennial meet, thereby making the boxing team the most successful in the pandemic-hit Olympiad.

Twenty six years after, Manny Pacquiao finally stepped down from the ring and left behind a legacy that may never be matched again, at least in our lifetime. The Pacman retired as the only fighter to win eight titles in as many divisions, a three-time Fighter of the Year, Fighter of the Decade in 2000s, and will be remembered for being involved in the richest fight ever in boxing history against Floyd Mayweather Jr. during their welterweight title showdown in 2015. The boxing legend though, failed to exit in a blaze of glory as Cuban Yordenis Ugas denied him of regaining his WBA 147-pound crown following a unanimous decision loss in his final fight on August 21 at the T-Mobile Arena in Las Vegas. He compiled a ring record of 62-8, with 39 KOs. Upon retirement, Pacquiao faces yet another tough fight by trying to become the first Filipino athlete to win the Philippine presidency. 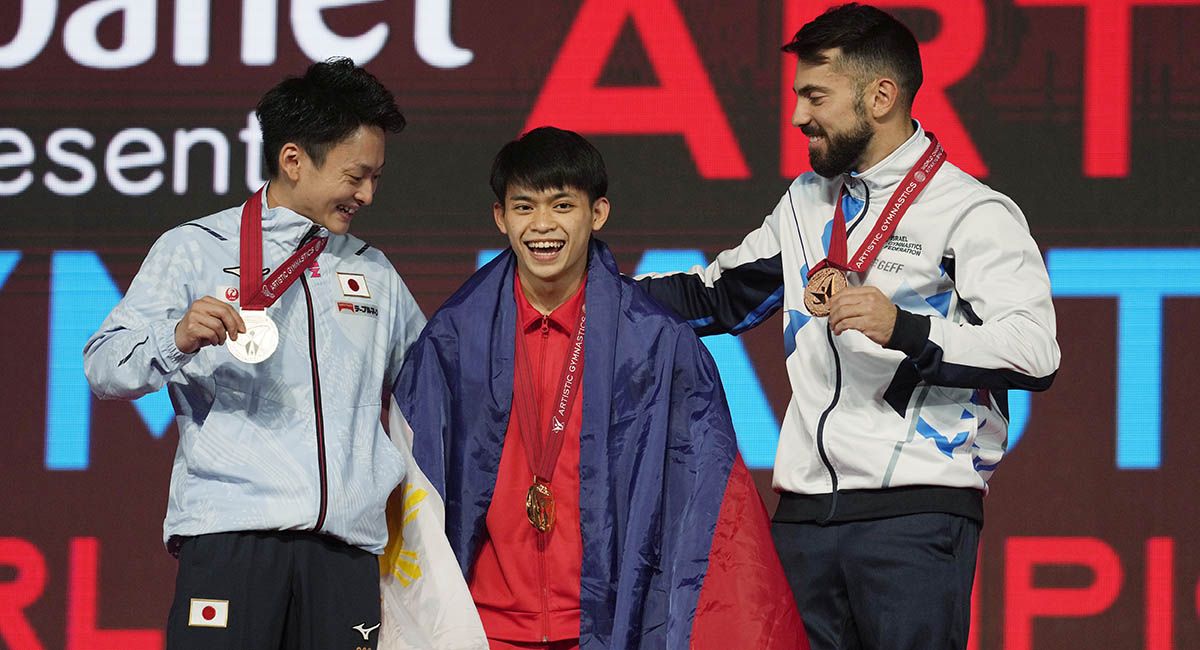 Falling short of living up to expectations in a failed Olympic bid, the Filipino gymnast knows no other way but to bounce back. And the 50th FIG Artistic Gymnastics World Championships was the perfect opportunity for him to mount his revenge. Similar in the Tokyo Games, the petite gymnast again didn’t land a podium finish in his pet floor exercise, but made his presence felt in the men’s vault where he won the gold. The Manila-born Yulo tried to make it a double, but his effort in the parallel bars only netted him with a silver. Nonetheless, the feat had Yulo winning a total of three medals in the last two editions of the world meet, counting the gold he bagged in the floor exercise during the 2019 edition in Germany.

The Mallorca-based netter sustained the strides she gained in 2020 with yet another solid year that saw her claiming the girls French Open doubles crown together with Russian Oksana Selekhmeteva. The duo beat the pair of Maria Bondarenko of Russia and Hungarian Amarissa Klara Toth in the final, 6-0, 7-5. It was the second Grand Slam crown for the pretty Filipina after clinching the girls’ Australian Open doubles championship two months before the global pandemic struck. Outside of the major championships, she also ruled the ITF Manacor Circuit and scored a twinkill in the ITF Milan Juniors championship by winning both the singles and doubles titles. 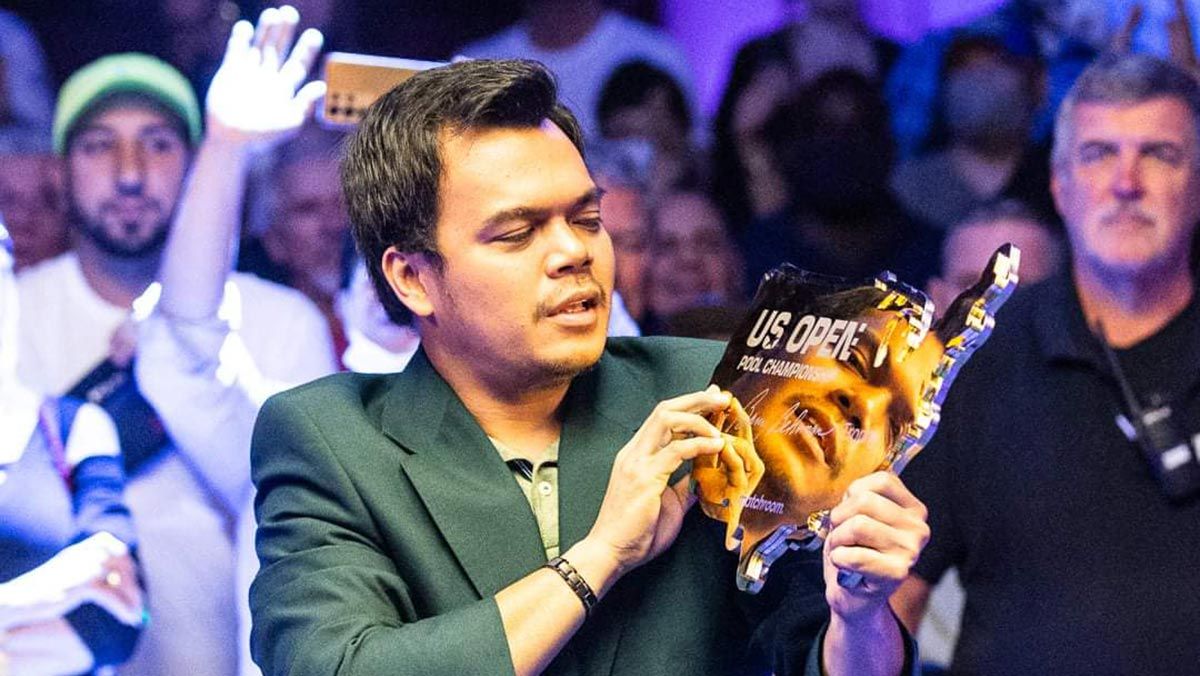 The pool master from La Union lined himself as the country’s newest billiards hero when he ruled the US Open Pool Championship at the expense of Singaporean Aloysius Yapp, 13-8, in the final at the Atlantic City, New Jersey. The 38-year-old Filipino won the top purse worth P2.5 million ($50,000) and became the first from the Philippines to win the title since the legendary Efren ‘Bata’ Reyes did the feat 27 years ago. It was truly a stirring triumph for the former two-time Southeast Asian Games gold medal winner who had to claw his way back from the losers’ bracket and survive a pair of hill-hill matches during the knockout phase to remain in contention. Even during the championship match against Yapp, the Filipino trailed, 3-8, but found a small opening in the 12th rack when his Singaporean foe missed on the 9-ball. He pounced on the opportunity and win the next 10 racks to claim the title.

The ‘Filipino Flash’ proved he’s no washed up fighter yet. On May 29 at the Dignity Health Sports Park in Carson, California, he regained a piece of the world bantamweight title when he scored a fourth round stoppage of Nordine Oubaali of France to claim the WBC championship. At 38, he became the oldest fighter to win the 118-pound crown in one of the biggest boxing comebacks of the year. Donaire successfully defended his belt with a similar fourth round knockout of fellow Filipino Reymart Gaballo in a mandatory fight three weeks before 2021 came to an end. The victory put Donaire in a perfect position for a possible unification rematch with Japanese rival and IBF and WBA champion Naoya Inoue by 2022.

The Tropang Giga ended a string of runner-up finishes when they finally copped the PBA Philippine Cup title by beating Magnolia in the finals, 4-1, at the Bacolor bubble in Pampanga. A series of off-season moves made by the mother team of the MVP franchise proved to be the big difference in TNT winning its first championship since 2016. Coach Chot Reyes was the first to come on board, taking over the place of active consultant Mark Dickel, before free agents Glen Khobuntin, Dave Marcelo, Ping Exciminiano, and Brian Heruela were added to the mix. The result had the Tropang Giga ending up as the no. 1 seeded team heading to the playoffs after finishing the elims with a near-perfect 10-1 record. In the playoffs, they dispatched SMC-owned teams Barangay Ginebra in the quarterfinals, San Miguel in the semis, and Magnolia in the title series to make it back again in the winners’ circle. TNT became the first team after Red Bull in 20 years to beat all three teams under the SMC umbrella on the way to winning a championship.

In one of the few dampeners in Philippine sports for 2021, the pole vaulter and his mother federation, the Philippine Athletic Track and Field Association (Patafa), got embroiled in a heated dispute surrounding the supposed salary of the Filipino trackster’s foreign coach Vitaly Petrov. The exchange of words and accusations between the two parties had gone too far, that the latest twist to the controversy now involved Patafa President Philip Ella Juico being declared persona non grata by the POC. Definitely, not everyone hasn’t heard the last from both parties.

The NLEX guard found himself in hot water when he decided to sign with the Shiga Lakestar in the Japan B. League despite having an existing contract with the Road Warriors. But unlike the Obiena-Patafa row, this one had a happy ending as the PBA Board eventually gave the 6-foot guard out of Ateneo the go-signal to play in Japan, but not after altering its rules regarding similar cases in the future. Another PBA player in Bobby Ray Parks also hooked up with the Nagoya Diamond Dolphins in the B. League, but unlike Ravena, his last contract with TNT had already expired.