"THAT’S our purpose - to challenge people."

That's the promise in the fifth edition of Salomon XTrail, which will feature new race routes and challenges to its devoted following in the trail running community.

The 2015 race is expected to draw 1,500 entries on April 25 and will be held for the first time in the exclusive Anvaya Coast residential community in Morong, Bataan.

Salomon started hosting events in the Swiss Alps with skiing and snowboarding races and has since earned a reputation for performance racing, trail running, adventure racing and city trail running.

Last March 25, the Swiss-based brand invited selected members of the media to conduct a six-kilometer walkthrough of a portion of the race course which will tour the roads, hills, mountains and valleys around Anvaya Cove.

The trail sections overlooking the cove are steep and technical, with sharp and loose rocks, roots and thick foliage, as well as rewarding views of the sea and the rugged Bataan peninsula.

Salomon Pilipinas brand manager Janice Tañada said the 2015 edition will offer race categories that will satisfy both newbies and hardcore racers. The 32km and 24km will be mountain races for dedicated trail runners while the 12km and 6km distances will be raced in trails suited for first-timers. 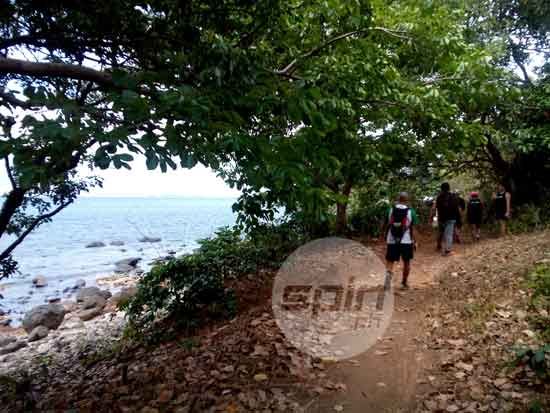 “It’s very scenic, there are waterfalls and multiple river crossings. The route will have more forgiving ascents and descents, but more ropes, water and river crossings to make up for it. There are also views of Mt. Natib. This time we'll show what technical is all about,” she pointed out.

Organizers said the race is a strictly green run so participants must bring their own bottles. For safety reasons, participants in the mountain runs will be be strictly required to bring mandatory gear such as headlamps, whistles and hydration packs.

Around Morong, a former Vietnamese refugee processing camp, pawikan-conserved beaches and Kanawan aeta communities are among the areas of interest the race will help promote. Beach resorts will also provide discounts to race participants.