Cheering from sidelines in SEA Games, Rio de la Cruz couldn't help but ponder what could have been

SINGAPORE - Unike a Manny Pacquiao fight or a UFC card, the Southeast Asian Games aren’t noted for drawing a ton of Filipino celebrities.

One notable exception in the 28th SEA Games in Singapore is popular running coach Rio de la Cruz, who flew in to the island-state to show his support for the Philippine track and field team.

Positioning himself near the finish line, De la Cruz shared several selfies, videos and results on his social media feed of the athletes’ exploits.

Even though he was a mere spectator, the man who has helped make running a national pastime in his country, felt a personal stake in the proceedings.

Rio even asked the coaches if he should bring out the flag as Duarte and the runners approached the finish line. He had wanted to arrive earlier to cheer for the marathon event where the Philippines won a silver in the women’s finals.

The afro-haired running coach regularly joins the members of the national team train at the Philsports Arena (formerly ULTRA) which is near where he lives.

“Sa hapon, minsan umaga. Talagang dedicated sila. Everyday, every morning except Sunday. Minsan sa UP may long runs sila. Sometimes I invite them on long runs with me inside Diliman,”Rio said, adding he saw some of them during the last part of their training before they left for the biennial showcase.

The soft-spoken runner-endorser admitted the experience made him think of ‘what ifs’ had he chosen a different path in his younger days.

The native of Bato, Camarines Sur said he was in college taking up physical education when he found himself choosing between an athletic career as part of the national team or placing his studies as his priority.

By then, the former UAAP track star had already won several awards for the University of the Philippines and was training with the national team in the 5,000m and 10,000m running categories.

He chose to focus on his education. 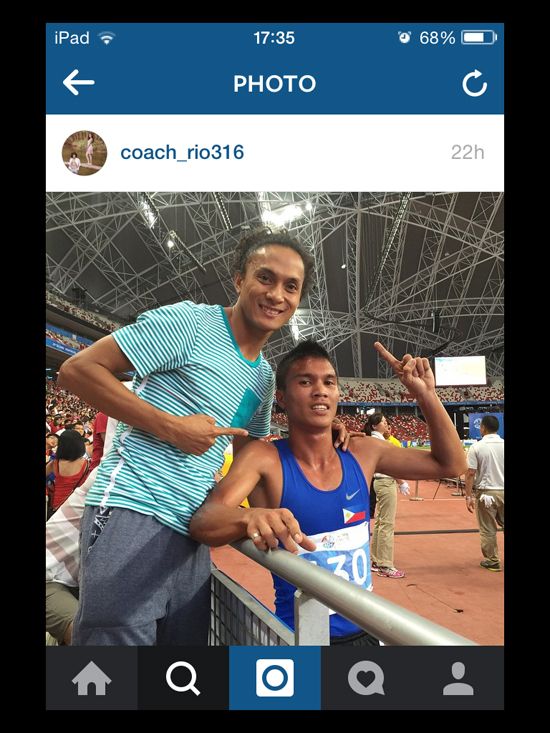 Now Rio helps out the national team by other means. He sheepishly admits providing what he describes as ‘little assistance’ to national team members in track and field in terms of an allowance and help with their uniforms.

The 32-year old coach, who is currently training for the New York City Marathon set for November, said had he decided to have been a national athlete, he would have competed as as middle and long distance runner.

With the country’s medal performances in running events in these Games, de la Cruz hopes the momentum could create a ‘second wind’ for the sport. He hopes for the same in triathlon where the Philippines completed a golden double.

There is also another reason close to home why de la Cruz is in Singapore.

The proud dad said his 15-month old son learned to walk before he could crawl.