Where does PH rank among winningest countries in SEA Games history?

THE Southeast Asian Games or SEA Games are just around the corner. They will be hosted by the Philippines on November 30. The last time the country hosted the games was in 2005.

Perhaps the peninsular countries realized this, and decided to eventually include the rest of Southeast Asia in 1977, thus conceiving the name Southeast Asian Games. The main purpose of the games is to promote cooperation and enhance relations among countries in Southeast Asia. Today, the games are participated in by 11 countries in the region: Burma, Cambodia, Indonesia, Laos, Malaysia, Myanmar, Philippines, Singapore, Thailand, Timor-Leste, and Vietnam.

Which country has won the most gold medals in the SEA Games?

To be fair, the question should not be a gauge of which country is the best in sports in Southeast Asia. For a long time, Timor-Leste was not a participant in the games, largely because it only gained independence from Indonesia in 2002. It was only admitted to the games in 2003. Meanwhile, Brunei, Indonesia, and the Philippines were only admitted to the games in 1977 after the 8th SEAP Games in 1975.

The following is the all-time medal standings of all participating countries in the SEA Games at the conclusion of the 2017 Games. 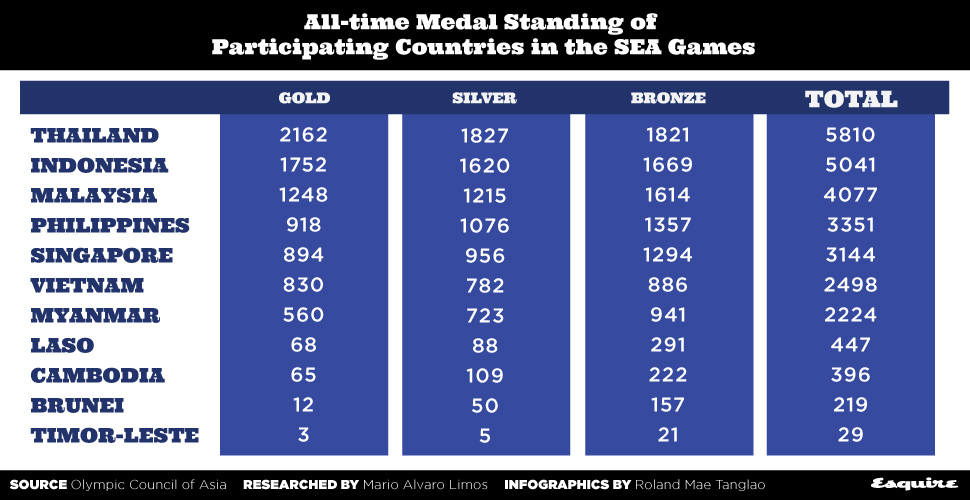 Host countries traditionally try to win as many golds as possible.

Historically, host countries of the SEA Games end up in the in the top three, if not the top 1 spot at the games' conclusion. This is because hosts tend to maximize their gold medal hauls by introducing indigenous sports to the Games when they host them.

This is possible because of the absence of a rule in the SEA Games that limits the number of sports to be contested. Each year, host countries would introduce obscure sports that their players are ridiculously good at-either because it is a national sport, or because they invented it!

In 2001, Malaysia included pétanque, which is like an upgraded version of the Filipino street game of marbles or holen, but uses bigger "marbles".

In 2003, Vietnam added shuttlecock. Filipinos are know it as sipa. The game is exactly how it is played in the Philippines.

The Philippines also used this loophole to its advantage. In 2005, it added arnis to the games. And, because Filipinos are perceived to be such good dancers, it also added dancesport to the SEA Games, because why the hell not. So, carpe diem.

In response to dancesport, Thailand made the ultimate one up in 2007 by adding sepak takraw, otherwise known as kung fu volleyball (well, not really, but it fits that description). It has been described as the most difficult sport in the world, and the Thais have an ungodly proficiency at it.

In 2013, Myanmar introduced its national sport chinlone, from which it won 6 gold medals.