TOKYO - A hectic news day for the Philippine media only got more frantic, and complicated, for jaded editors after Hidilyn Diaz delivered the Philippines' first-ever Olympic gold medal on Monday night.

Most of the country's top newspapers had put their front pages to bed, carrying headlines about President Duterte's final State of The Nation address as the printing presses got ready to roll.

Some with more flexible deadlines than the others left the back pages, where the sports sections traditionally are, open as well as a small window on the front page, in case Diaz delivers the country's first medal from the Tokyo Games.

What happened next was a 'Stop the presses' moment that is as rare as it is special, or tragic, depending on the news.

This time, of course, the news was a happy one - and history-altering for a nation that until Monday night had won just 10 Olympic medals in all and had waited 97 long years for the golden variety.

As news of Hidilyn's breakthrough victory sparked euphoric scenes around the country and elsewhere, old hands in news desks in Manila were frantically redoing their front pages to make the necessary correction.

"Binaklas ang banner," said a veteran editor of the Philippine Inquirer, using an industry jargon for changes done to the day's headline story.

Those scenes were repeated in most newspaper offices in the Philippine capital.

Most Philippine newspapers, which like most industries are defiantly carrying on despite the ravages brought about by the Covid-19 pandemic, were carrying Diaz's historic victory in their headlines by the time the final copies hit the streets.

Collector's copies, if we may add. 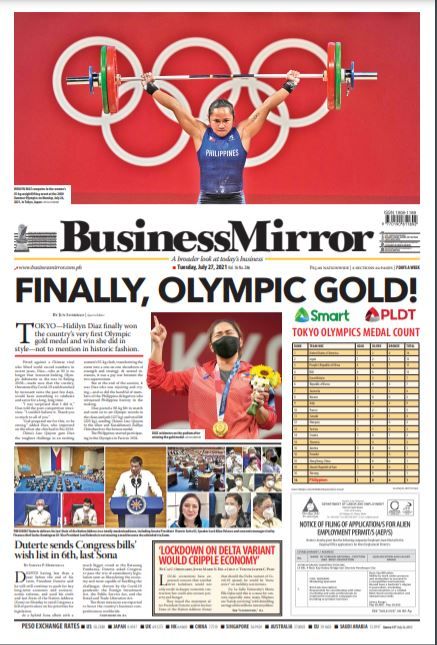