WHETHER you’re a mountain biker, triathlete or into folding bikes, there is something for every ‘kapadyak’ in the 2015 PhilBike Expo.

The PhilBike event catered to a growing number of riders, more so those who are very keen on cycling and riding not just as a sport but also a form of health and transportation.

“It’s a growing movement — one of the drivers why the expo has grown in such a short time,” Geslani-Okal explained.

A wide mix of brands comprise the 40 booths that range from high end, mid-range to low end bicycles that ensures there is something for everyone.

‘High end’ connotes to the super expensive, carbon fiber bikes that fetch P300,000 to upwards of 700,000. The price reflects the materials, the ingenuity in the design, the brand they represent and the engineering that went in it.

The number of exhibitors and the quality of the displays have both improved and favorably compare to international shows. Among the new brands which joined the 2015 edition were Specialized, GoPro, DeRosa, Hasa and BMC.

The attendees were a pretty broad range that provided diversity to the expo which was a result of a partnership with almost all of the different types of cycling groups: folding bikes, mountain bikes, fixed gear, serious enthusiasts and collectors.

Many of the visitors flocked to look at one of the most expensive bikes in the expo - a commemorative edition of a Colnago C60 (only 60 examples were made). The price? A cool P700,000. Another model, the Otanta, celebrates Colnago’s 80th birthday and has a production run of only 80 bikes and has an SRP of P630,000. Carbon fiber too expensive for your taste? A steel frame of the classic Master will still set you back P140,000.

Dale Rosales of Colnago Manila said the literal Ferrari of road bikes actually use technology developed with the Italian race car manufacturer in a collaboration that began in the ‘80s. The CF series uses the aerodynamic-enhanced, carbon fiber frame that has impressive power-to-weight ratios and response. The current CF10 goes for a cool P550,000 while the mountain bike model goes for P260,000.

If you don’t have the cash to spare, there are brands such as Taiwan–based Viper Bicycles that offer a wide array of entry to mid-range priced MTB, road, folding and fixed wheel that go from P8000 to 24,000.

Even though the majority of the brands were foreign, two Pinoy bike companies were present - Bambikes and Nyfti.

“Bamboo is a very sustainable and renewable material — if you cut a bamboo pole another pole will grow into its place. It’s good for the environment,” said Joshua Gan, Bambike’s supply chain head.

As part of a social enterprise program that supports communities, bamboo is grown in Abra and later brought to Gawad Kalinga villages in Tarlac where these are made into bike frames of various sizes in two to three weeks.

Nyfti on the other hand is the first Filipino company to build folding bikes of which there is a very close-knit community.

“We really do need to have more manufacturers, we have very little now. We have the infrastructure, manpower and the talent to do it. There is strong interest in the Philippines becoming a manufacturing hub. We need to encourage more companies and the expo is one of those ways,” Geslani-Okal pointed out.

Aside from the booths, there were also several activities - the first indoor mountain bike track in the country while a bike park at the other end hosting the 1st BMX National Championship.

One section of the expo was dedicated to advocacies, with groups such as Bikes for Pencils (a group that collects school supplies that they donate to indigenous communities), the National Bicyle Organization, the Firefly Brigade plus beneficiaries Gawad Kalinga and Bayani on Wheels.

To spice things up, three international bike stars were on hand to grace the event - bike freestyle great and Guinness World records holder Vittorio Brumotti, BMX tricks and stunts experts Matthias Dandois and Viki Gomez flew in from Europe to perform their impressive routines and share their knowledge to the local bike scene. 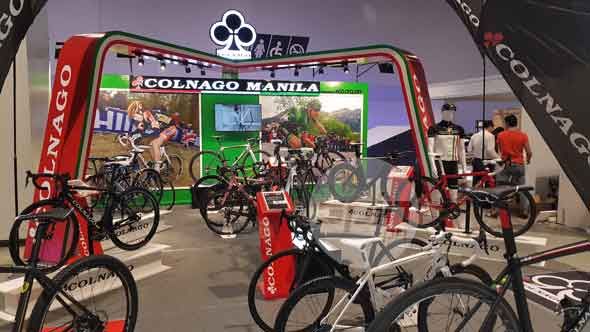