A total of 1,740 participants took part in the 3K and 5K distances within the 51-hectare DLSU-STC campus for the first-ever sunset fun run of the series, which did away with competitive middle distances in a bid to attract young leisure runners.

DLSU-STC, as a first time host, emphasized one of the DLSAA’s objectives of helping promote the sprawling satellite campus which houses La Salle's science and engineering courses.

Top finishers for the 5K category were Art Thomas Fronda, Gerald Ambayec and Norman Flores for the men while the best finishers on the distaff side were Aira Georgina Lim, Cienne Cruz and Carol Ann Cerveza.

For the 3k category, podium finishers were Jordan Paul Billones, Robert Francisco and Darwin Delizo for the men; and Felyn Dolloso, Marimar Manzano and Chrishel Salonga for the women.

The DLSAA awarded the winners with medals and plaques, along with Microtel gift checks, free memberships in Fitness First, Nestle Gift boxes, designer ANIMO pastries from Captain’s Sweet Galley of Treats, and a Timex wristwatch for the Early Bird special prize.

An after-run mini concert entertained the finishers while a fireworks display capped the event. 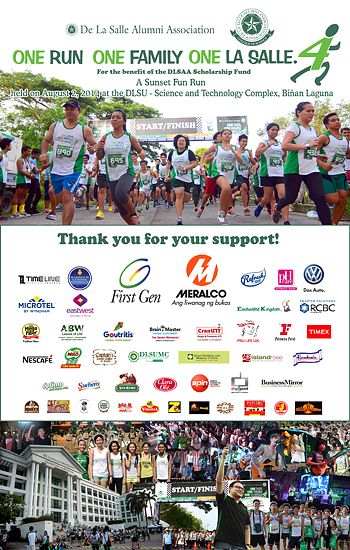