RENSON Emradura sports a huge callus smack in the middle of his right palm.

Yet he wears the callus like a badge of honor, its size paling in comparison to his enormous heart and the big smile on his face after finishing his first 50-kilometer race in the 2016 CardiMax Ultramarathon at the Clark Freeport Zone — on one leg and a supporting crutch.

Renson crossed the finish line 12 minutes past cut-off on Sunday morning, but that hardly mattered. Or that he had been running for the past 10 hours and soaking wet in the rain.

In all the races he gets invited to join, Renson said the cheers and applause of “Idol!” or, “Kuya Kayang kaya mo iyan!” always fuels him to go on.

Born minus a right leg and undeveloped fingers in his right hand, Renson discovered running three years ago when he was invited to a run in their barangay. He said he has a prosthetic leg but prefers to go with the crutch since he had gotten used to it since he was young. 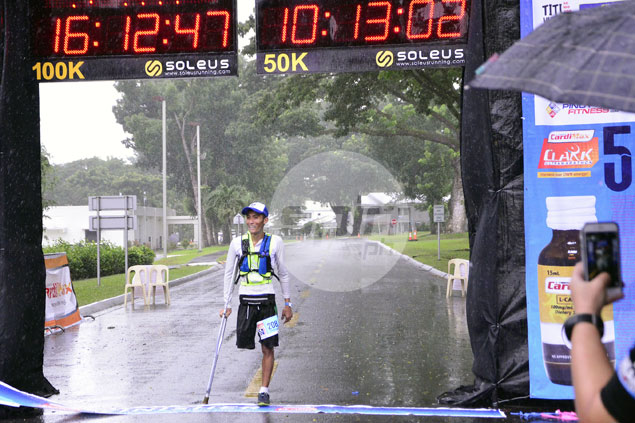 His idol and running mentor is Judy Marcelo, who Renson trains with as part of Team Sariaya, a group of runners from the scenic town at the foot of Mt Banahaw. He said Judy inspires him because of the running medals she has accumulated and that he too wants to win medals of his own.

Judy and another runner from Candelaria accompanied Renson in the six-hour trip from Quezon to Pampanga on the invitation and sponsorship of CardiMax organizer Tin Ferrera.

Judy said she first met Renson in the municipal hall where he works in the information office assisting visitors.

But even Judy had her doubts about Renson finishing the race, since the parathlete had no experience in trail running, no idea of the trail’s condition, and in fact had no trail shoes in his possession.

As if he needed more motivation, Renson met Ernest Carual during the race. Carual is an osteomyelitic (born with one shorter leg) who did not let his condition prevent him from regularly taking part in long-distance races.

The fifth of six children, Renson said he has limited time to train since he also works as a charcoal maker to help support his parents. But he regularly joins at least two races a month if they are nearby. He wishes to join more but lacks the financial means.

Renson said he wants to gradually increase the distances he runs. His dream race is to join an event for fellow physically handicapped athletes as himself.

Now Renson will have to get used to is becoming a shining inspiration to many people, young and old, handicapped or not, including his idol Judy who was there to see him cross the finish line and couldn't help but be moved. 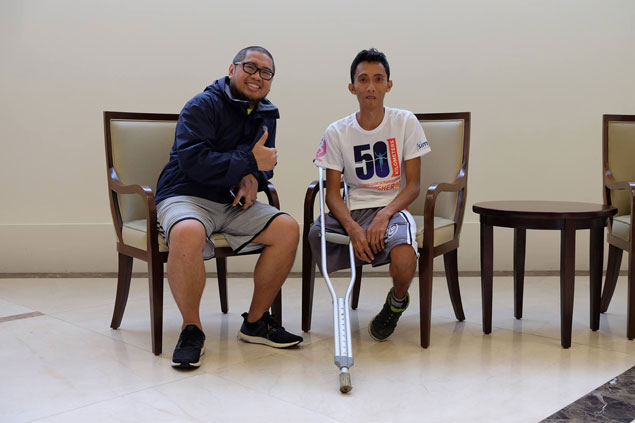