NOW San Miguel Corp. is expanding the reach of its charity drive beyond Metro Manila.

The firm’s assistance to COVID-19 cases has now reach P947.7 million and there’s no sign of slowing down as it continues to find ways of bringing relief to the hardest hit communities and provinces nationwide.

SMC president and chief operating officer Ramon S. Ang said the company has responded to calls for assistance from local government units outside the National Capital Region, including provinces as far as Iloilo and Leyte.

“Our people are working hard to be able to extend our assistance to more provinces and communities and to support our national government’s efforts. Our goal is to help keep our countrymen away from hunger and illness, and somehow, in our own way, give them hope during this difficult time,” Ang said.

The effort of SMC to reach vulnerable communities in other regions, has started gaining ground.

In Kananya, Leyte, it provided 1,187 families with relief packages consisting of one sack of rice and two whole chickens. 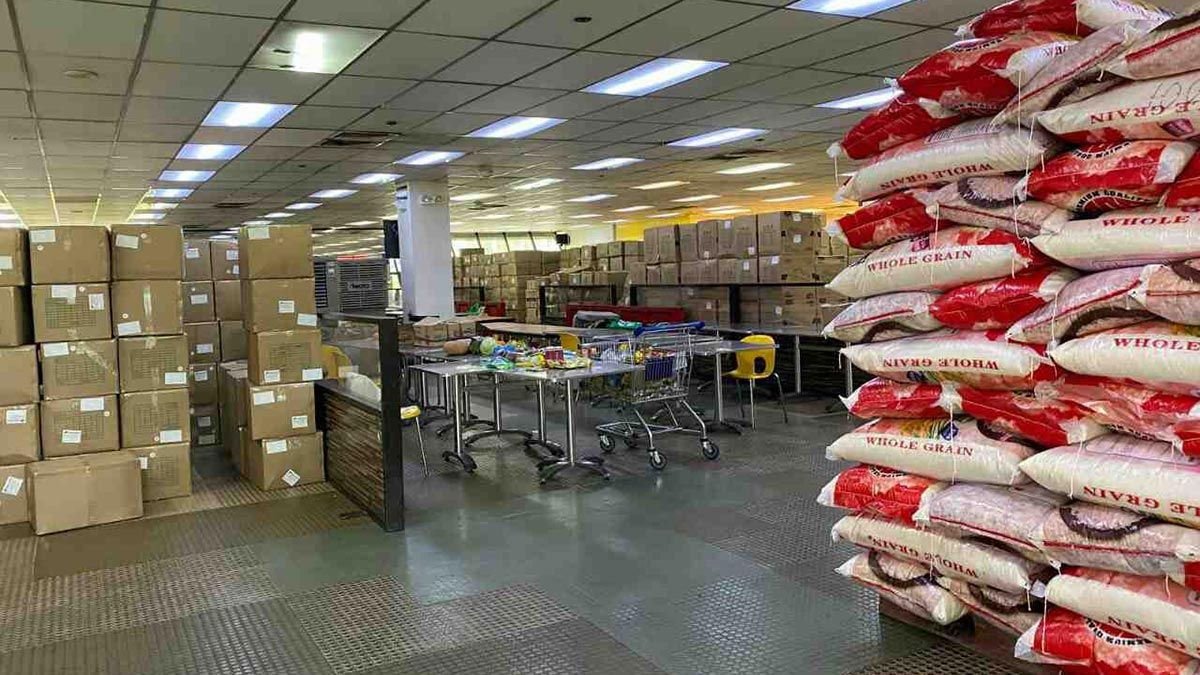 Its flour donation has already reached many other areas outside Metro Manila, including Pangasinan, Bulacan, Batangas, Iloilo, among others.

It has also donated flour to the National Council for Indigenous Peoples (NCIP) in Tanay, and military camps, including Camp Capinpin in Tanay, Camp Melchor dela Cruz in Isabela, and Marine Barracks Gregorio Lim in Ternate, Cavite.

“We are also sending more flour donations to poor communities in Payatas, Tondo and other depressed areas that really need help. With the help of LGUs and local bakers, they can have nutritious and filling breads, which is a staple for Filipinos families,” Ang said.

Ang said the company is also considering using strategically-located Petron stations and other SMC facilities as distribution points for its own version of nutribun, a vitamin-rich bread that the company produced at the start of the ECQ to combat hunger in poor communities. 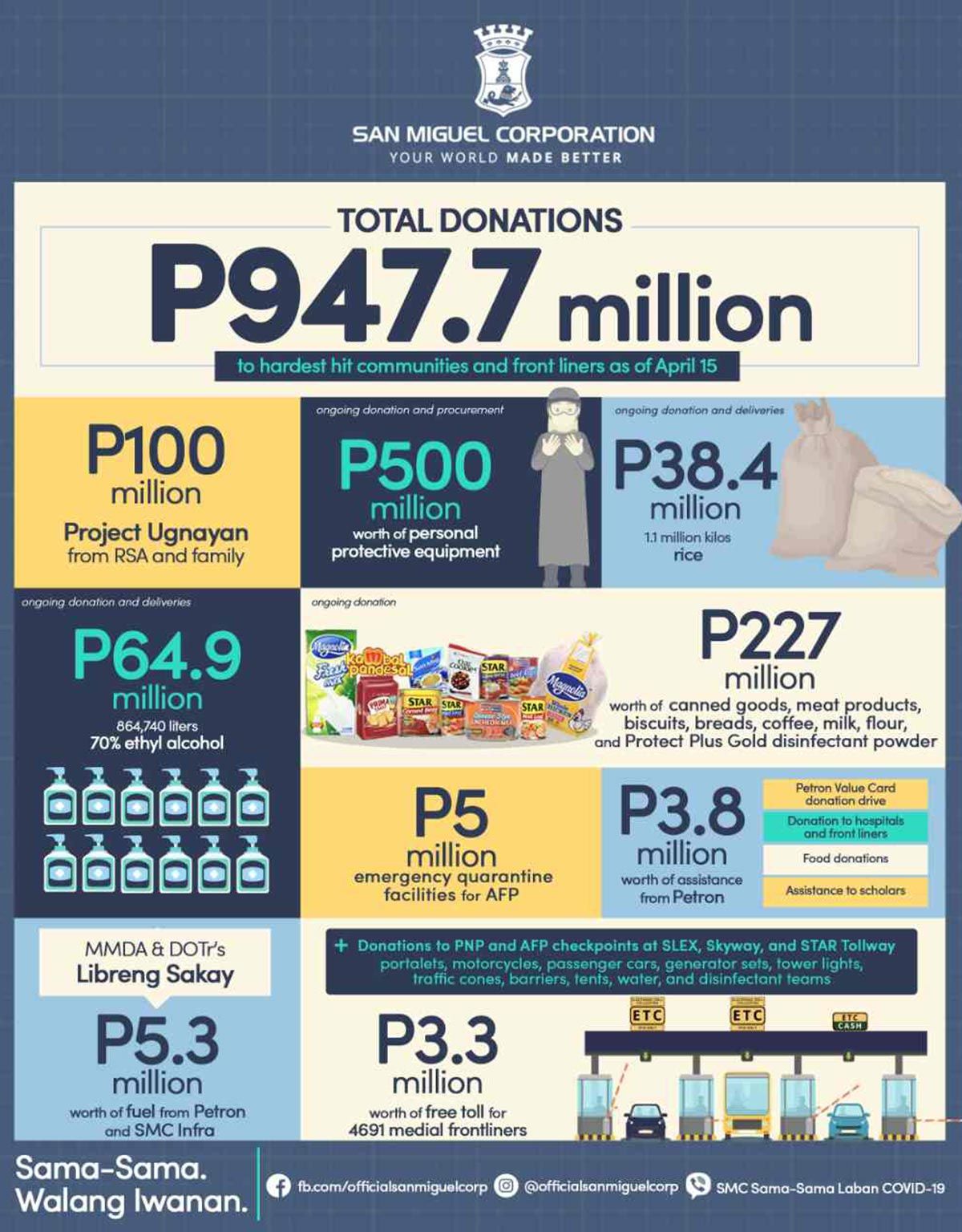 As of Tuesday, SMC’s total allotted food donations has topped P227 million. These food donations include canned goods, biscuits, coffee, and milk delivered through the LGUs, non-profit organizations and church-based groups, among others.

It has also distributed some 1.1 million kilograms of rice, worth an estimated P38.4 million.

The company has donated a total of 864,740 liters of 70 percent ethyl alcohol to date at P64.9 million. Alcohol produced from the Ginebra San Miguel facilities are being distributed to various hospitals, local government units, national government agencies, and other institutions and organizations.

The bulk of SMC’s donations, some P500 million, is being used to purchase protective gear from local and international suppliers, to help better equip medical front-liners in their battle against the Covid-19 virus.

It has provided free pass to 4,691 health workers to date using its STAR Tollway, SLEX, Skyway, NAIAX and TPLEX. It has also supported the Philippine National Police (PNP) and Armed Forces of the Philippines (AFP) by providing vital resources and supplies to checkpoints at its tollways. 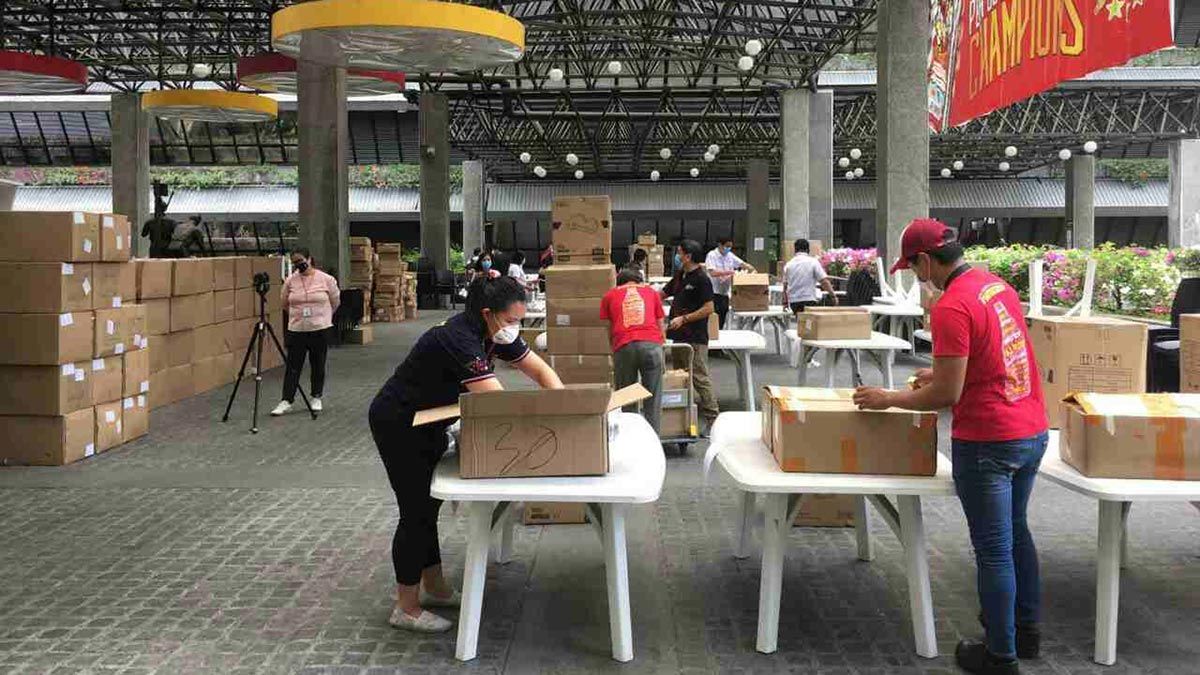 The donation also includes P100 million given to “Project Ugnayan,” a broad coalition of businesses groups also helping in the Covid-19 battle.

It has allotted P5 million for the construction of emergency quarantine facilities in military camps nationwide, a project it is undertaking with the AFP

SMC, through SMC Infrastructure and Petron Corporation, has also donated P5.3 million worth of fuel for the Department of Transportation’s (DOTr) and Metro Manila Development Authority’s (MMDA) “Libreng Sakay Program” for medical workers.