WHEN 16-year old Matthew Walzer sent Nike a letter in 2012 asking for help, he had no idea what was coming.

In a touching YouTube video by Nike, it was revealed that Walzer, who has cerebral palsy, wrote to Nike CEO Mark Parker asking if the company can help him with his condition.

The 16-year-old high school junior from Parkland, Florida said that he’ll be going off to college in a few years and didn’t want his parents to continue doing a simple task most people take for granted.

“Cerebral palsy stiffens the muscles in the body as a result I only have flexibility in one of my hands which makes it impossible for me to tie my shoes,” said Walzer, who was inspired by Bill Bowerman, the man credited for making the first pair of Nike shoes.

“This is a real issue. This is a daily challenge that millions of people face. Can you guys help me out?” Walzer wrote in his letter to Parker.

Nike obliged and Tobie Hatfield, the younger brother of Tinker Hatfield of Air Jordan fame, was put in charge of the project.

“We do such a great job of helping athletes perform better and faster and jump higher… but what about perform better just in the sense of quality of life? When we say you have the body of an athlete, that mean’s everybody,” Hatfield said.

The head of Nike’s Innovation Kitchen said the idea of a shoe of easy entry/exit came to him from Parker himself when he received a call from former Nike employee Jeff Johnson whose right side of the body was rendered non-functional by a stroke.

Hatfield, who joined Nike as a senior engineer in 1990, started thinking about doors on a hinge as a solution.

“Matthew was looking for a basketball style (shoe). He really loves LeBron James and so I said, ’I’m gonna take this zipper in the back so this can literally peel open — the main thing was getting him in the shoes, adjusting the shoes, closing the shoes and be able to get out of the shoes all by himself.”

The teenager’s reaction on his first customized shoe was heartwarming.

“I’ll never forget that night, take them out of the box, putting them on, I just felt this wave of independence that I never got to experience before,” he said.

Nike worked with Walzer since September 2012 to produce a mass production shoe for individuals with similar needs. The teenager was involved in the design process akin to what celebrities Tiger Woods and Maria Sharapova experienced with Nike.

Soon to be released to the public, Flyease is “a cutting edge, wraparound zipper system that makes getting into a shoe much easier for those who had trouble with their hands.”

Hatfield presented the first pair of the production shoes to a visibly emotional Walzer. As a bonus, he even got to meet LeBron James in person.

“He inspired us at Nike to be able to bring something special for the masses. .. I’m very honored and very blessed my shoe was part of that project. The inspiration (Matthew) gave us will last for a lifetime,” James said. 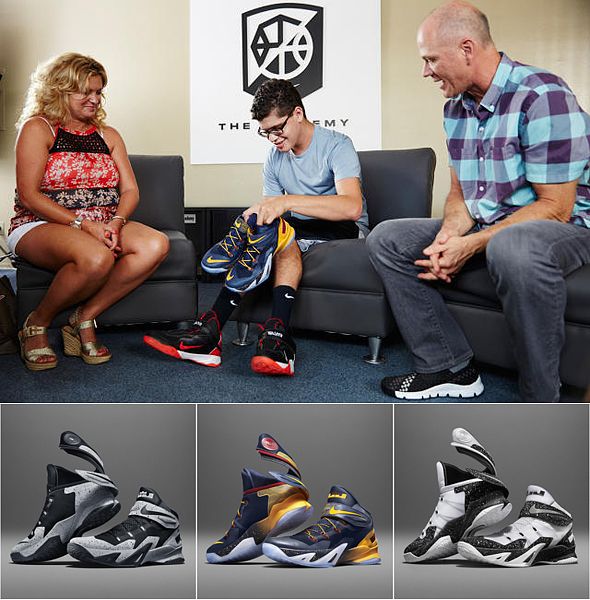