AT the corner of 9th Avenue and 32nd Street in Bonifacio Global City lies the heart of Nike’s new Unlimited campaign in honor of the world's best athletes competing in the Rio Olympics.

The first of its kind in Asia, Nike’s Unlimited Stadium is meant to unlock the potential of Filipinos and is strategically located in what is considered Metro Manila’s iconic running hub. From August 5 to 21, the Unlimited Stadium features a digitally-enabled running track that for 17 days will play host to running events and services.

Open daily from 4 to 10 PM, the Unlimited Stadium is Nike’s reimagining of the running track, a space in the shape of a 100-foot sole print of the Nike LunarEpic Low Flyknit, one of Nike Running’s latest shoe offerings.

The experience is part physical and digital as the 200-meter running track is lined with LED screens. Runners are invited in a race against digital avatars of themselves that grows in size based on the speed and distance they run, a motivation for runners to push and do more than they thought possible.

Runners will be rewarded as they complete each challenge, with an epic run experience by Nike as the ultimate reward.

“The Unlimited Stadium is designed to encourage people to push beyond their limits, and to celebrate the spirit of doing more than what you thought was ever possible. Especially in the next 17 days when the world watches the best athletes on the planet defy expectations, Nike enables Filipinos with the opportunity to do the same through the Unlimited Stadium,” said Bulbul Khera, Senior Director for Marketing, Nike Southeast Asia.

Prior to the official opening of the stadium, Alyssa Valdez, Jimmy Alapag, Amy Ahomiro, Moala Tautuaa and Jeric Teng were among the brand ambassadors who featured the Unlimited Colorway collection that will be available in selected Nike stores and will be offered across the Running, Training, Basketball, and Nike Sportswear categories.

Join and discover your unlimited potential through Nike+ challenges, powered by the Nike+ Running and Training Club apps, available for download at the Apple and Android store. For more information on the challenges and schedule of events at the Unlimited Stadium, go to www.nike.com/manila, or call the hotline at 02- 463-4814. 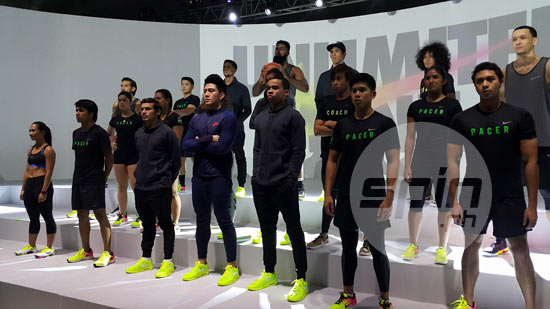