MEB Keflezighi wasn’t the only winner when he crossed the finish line in the 2014 Boston Marathon.

America’s top marathoner and Skechers GORun ambassador led the pack of elite runners in his high-performance running shoes which has attracted wider attention following his victory.

"With the support of the Skechers Performance Division by my side every step of the way, I have won for the city of Boston, and for the entire US," said Keflezighi during a press conference after the race. 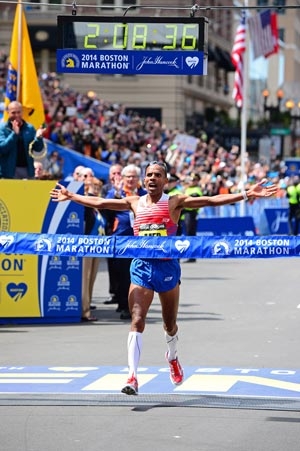 Meb’s victory became a feel-good story in the running community, following the devastating bombing incident in last year’s Boston Marathon as he is the first American to win in the prestigious Boston Marathon after three decades with a new personal-best time record of 2:08:37.

Vice president of merchandising and marketing for Skechers Performance Division Rick Higgins said, “We are so proud of Meb and his monumental accomplishment on what was clearly a very emotional day…if [he] can do it in Skechers shoes, so can you.”

The Skechers Performance Division first signed Meb in 2011 to represent them as they launched its new footwear line. The Skechers GORun is designed for speed with its innovative M-Strike Technology to promote a mid-foot strike (two-point step: mid-toe), allowing more fluid and powerful strides than a heel strike (three-point step: heel-mid-toe).

Meb transitioned from a heel strike to a mid-foot strike runner with Skechers GORun, giving him an effortless and faster take off. Since that time, Skechers M-Strike Technology’s influence on the improvement of Meb’s PR (personal record) has been evident.

At 36, he ran in the NYC Marathon in Skechers GORun back in 2011 and posted a personal-best time in finishing sixth in New York that day, and then lowered it again in winning the US Olympic trials just two months later. Meb also won more than five key races, including the US Half Marathon Championship in Houston in January 2014, and the US Olympic Trials in Houston in 2012.

His Boston Marathon have come as a surprise to many given that the race was held just two weeks before Meb turned 39.

“It’s a pretty massive deal for a non-traditional running shoe company,” said Eric Smallwood, senior vice president of Front Row, a Philadelphia marketing and analytics company focused on sports. “If you’re a runner and you get a PR (personal record) in a new pair of shoes, you’re sticking with those.”

Are Skechers Performance shoes any good?