“We’re a very young team and we plan to continue the development of their skills to improve our performance. We’re very new and we try to learn from what we see,” said Co, who believes exposure in these kinds of events will greatly benefit the team in the long run.

A total of 250 athletes comprising 14 teams from eight countries and territories around Asia participated in the fifth edition of the annual competition. It is the first time the Philippines has hosted the event.

Each team was composed of two members inside an elaborate lion costume while their teammates play traditional Chinese musical instruments.

Dexterity, focus and skill are put on display as the ‘lion’ is brought to ‘life’ while performing a closely coordinated dance-slash-stunt while moving from the top of elevated poles several feet off the ground.

Malaysian coach Lim Wei Kang said “training, training, training” gave them the advantage. For two weeks prior to the competition, his young team of secondary and primary school students devoted themselves to six- to eight-hour practice sessions on a daily basis.

The 2016 championship will be held in Guangzhou, China. 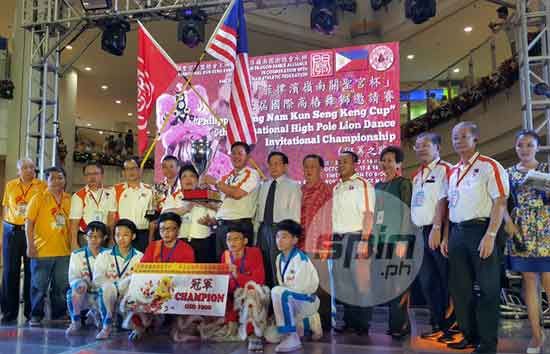