The Department of Public Works and Highways has announced that up to 13 road and mass transport system projects in Metro Manila are slated to begin within the next two years and last until 2017. 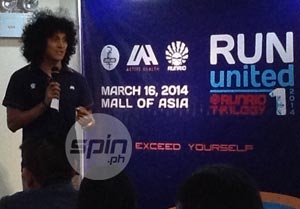 Last year, RunRio, the leading race organizer in the country with a reputation for holding world-class running events, staged at least 12 major running events in Metro Manila, not counting weekend fun runs it holds on a regular basis every month.

Although the extent of the new projects' affect on traffic in and around the two most popular venues for marathons and half-marathons- the Mall of Asia in Pasay City and the Bonifacio Global City in Taguig - remains to be seen, major road projects will definitely influence vehicular flow in these areas.

“In 2014 there will be a lot of road construction projects within Metro Manila - in Magallanes, EDSA, Buendia and Skyway,” said the RunRio founder. In July, construction of a bridge that would link the BGC and the Ortigas Center is slated to begin.

“As you can see we have to avoid these roads – that is the challenge for this year,” he explained.

Local government units and the MMDA are concerned with the effect the runs will have on re-routing vehicular traffic. There have also been constant complaints from commuters about the traffic problems caused by running events held in the congested metropolis.

The concerns of the former national athlete are justified since a large number of complaints from the public could have a negative impact on sponsors as well as on race organizers' hopes of obtaining permits for future races.

In the 2013 Yuletide Season, the Metropolitan Manila Development Authority announced a temporary ban on marathons and fun runs in an effort to alleviate heavy traffic conditions. However, the running community was hardly affected since the period also coincided with the offseason for runners.

For RUN United 1 scheduled this March 16, RunRio adjusted their routes to minimize the areas around Roxas Boulevard that will be affected by the race.