IT took a tenth of a second in a down-the-wire finish for a 17-year old cycling greenhorn to become the fastest rider in the 2015 AboitizPower Tour of Subic Bay on Sunday.

Kristian Reyes of Team Aboitiz Power Cycling Team finished with a time of two hours, 34 minutes and 29 seconds to beat teammate Jason Comandante by a tenth of a second and Resty Aragon of Team Excellent Noodles to rule the Category 2 Advance category race.

More than 200 cyclists took part in the annual race over a 90-kilometer course that stretched from Maritan Highway inside the former US Navy Base all the way up to the turning point located near the Bataan Nuclear Power Plant in the town of Morong.

Reyes, who used to be a high school varsity player in basketball, said the hot weather did not bother him and his endurance helped in the multiple uphill portions when he took the lead over more experienced riders at the Morong Gate turnaround back to Subic.

The incoming business administration freshman at the Far Eastern University said he took up competitive cycling full-time only last year.

Michelle Barnachea of Team Philippine Navy- Standard Insurance took top honors in the Female Open in another race decided by a tenth of a second, besting Mari Maligaya of Sante Barley with a time of 3:04:34. Irish Mae Wong of Corratec Pilipinas crossed the finish line 13 minutes later. 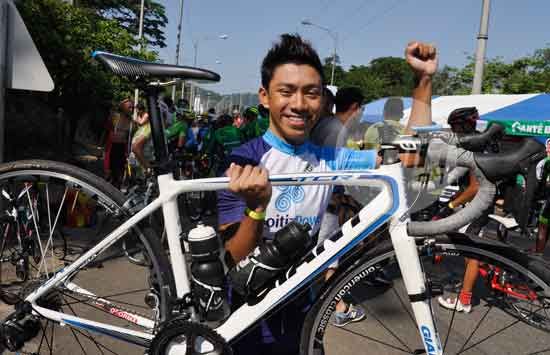 Trophies and giftpacks were awarded to all Top Three male/female category winners during the awarding ceremony held at the Subic Holiday Villas.