Kib Montalbo's addiction to winning evident on and off court

In the evening, the 5-foot-11 Bacolod native contributed seven points, three rebounds, and two steals to help TNT close out Magnolia in the finals and claim the 2021 PBA Philippine Cup. "Sobrang sarap sa feeling. Indescribable talaga feeling na mag-champion, but it always goes to show that hard work really pays off," he said.

Winning it all is a familiar feeling for Montalbo, who was a stalwart in La Salle's couple of championships in the mid-2010s and was the centerpiece in St. John's Institute's contenders in Bacolod. Still, he's pretty certain that his first pro title is something he will never forget. "Masarap lahat ng championship. 'Di ko sila mako-compare sa isa't-isa kasi lahat, sobrang sarap sa pakiramdam," he said.

Getting to touch that Philippine Cup was actually already the second time the 25-year-old celebrated that day.

In the afternoon, he finally got to see his diploma - well, not in person and just virtually, but still. "It felt great (to see it) and I'm really happy to make my parents proud," he said, also giving props to his sister who received the package and sent the photo. 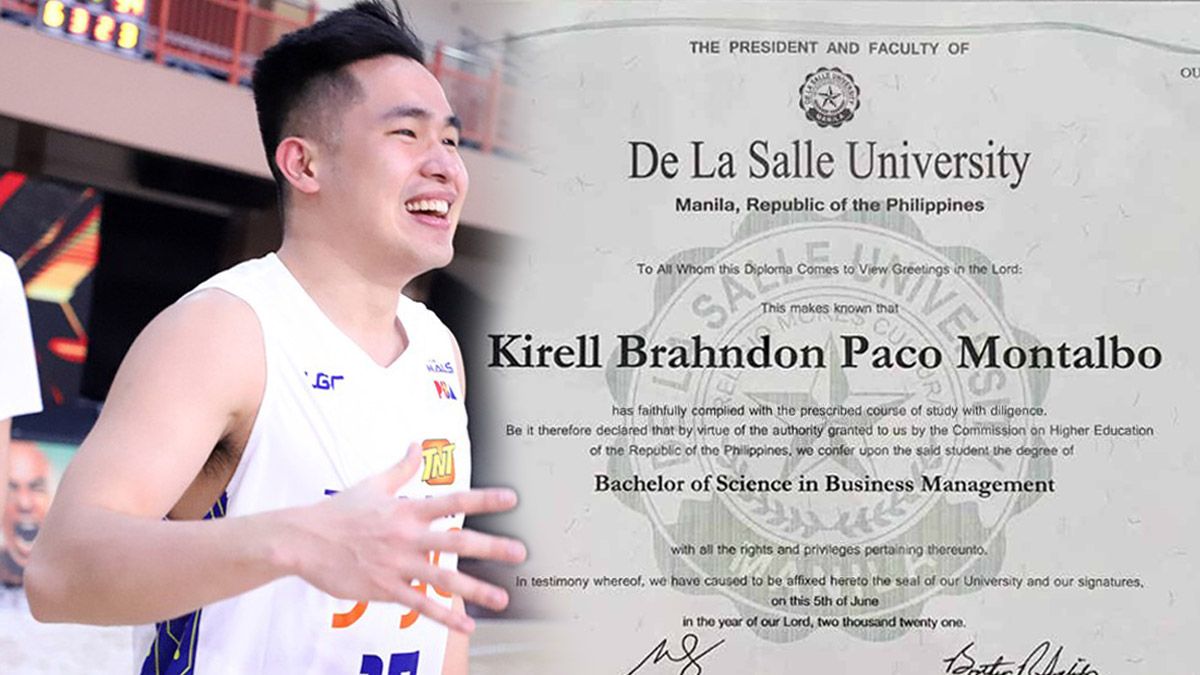 Without a doubt, he did just that, as Roger Montalbo was one proud papa. "Yun ang sabi ko sa kanya: gusto ko diploma. Yan ang personal trophy niya," he told Spin.ph's Reuben Terrado in an interview a day ago.

Just as he worked hard to become a key contributor in the Tropang Giga's title run, the younger Montalbo also worked hard to get his degree in Business Management. In fact, most of the time when he wasn't playing or practicing on the court inside the semi-bubble, he was studying.

Unfortunately, the family celebration back home will have to wait a little longer because of travel restrictions, but it just means that he can turn his attention to a new goal right away: another championship. "Probably, I'm gonna go to the beach for a day or two just to unwind. Then it's back to work because I wanna win more championships," he said.

Remember, that non-stop drive was the reason behind Montalbo's rise from an ACL injury to a leading role as the "Man of Steal" in La Salle - and then from the end of the bench to a starting spot in TNT. "I always put that chip on my shoulder. I wanna prove that I belong in this league," said the two-way player who very well may be the perfect backcourt partner for super scorer Mikey Williams.

"That and just pure hard work. From early morning shootarounds and skills work to focusing on getting stronger by being a gym rat. That's what I have to do and keep doing."

As for that diploma? Montalbo will find good use of it sooner than later. "Hopefully, I can also start my own business soon," he said.

Whatever that business may be, there's already a perfect date for its opening. October 29 had always been good to him.