“Faster. Higher and Stronger” in Latin, the Olympic motto has been adopted as the new battlecry for the Run United Series 2014 during a Bloggers' Night hosted by Unilab Active Health last Monday at the 100 Miles Café in Bonifacio Global City.

Now on its fifth edition, RUN United 1 is scheduled for March 16 at the Mall of Asia and will once more be organized by RunRio.

“’Exceed Yourself’ can have many meanings - you can finish the race faster or you can go to higher distance categories. That’s one of the reasons last year that we calibrated the races of RUN United,” he said.

Active Health said it will incorporate these values in their Run United races, which were calibrated last year to challenge its regular participants.

“If you remember before there were short distance categories like the 3k and 5k. Last year the first race featured 5-10-21 kilometer races. Then in the second installment 10K was the shortest distance in a 10-21-32 format. In Run United Philippine Marathon (RUPM) the categories were 10-21-42. We want to cater to the progressive athlete. These are members of the running community who want to continuously want to become a better version of themselves,” he said. 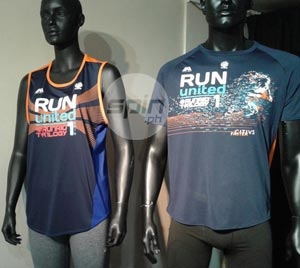 Aside from the races, the values of excellence will also manifest in the design of the singlets and the finishers’ shirts, a number of which were on display during the Bloggers’ Night.

The RUN United singlets, made by Active Health Race Solutions, include a fabric type designed to reduce scratching and chafing. The front of the singlet is made of soft jersey fabric for lightness and reduced chafing in the torso area while mesh was used in the lower areas for increased airflow and breathability.

Another major innovation is a sweat-triggered effect, which makes the values appear in the back while running. “The more you train, the more you sweat, the more the value of your excellence will come out,” Castillo said.

Each singlet will be packed in a clear plastic polybag to protect it from dust and to ensure a fresh feel when worn.

The finisher’s shirt - which ULAH calls a Finisher’s Badge Shirt - will not display the usual Run United logo but infuses emotion into the design that articulates the accomplishments of each value.

RunRio founder Rio Dela Cruz also discussed the race’s improved registration process, notably the introduction of prepaid cards that would allow participants an easier way to input information as well as register other runners on their behalf and as viable alternative for those without credit cards or Paypal accounts to join.

The running coach also made a welcome announcement that there were no registration fee increase in all categories which range from Php350 in the 500 meter dash to 21K (Php900). 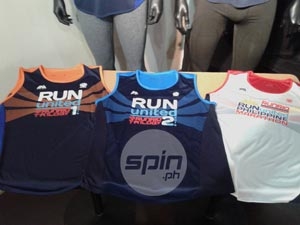 Racepack collection would be at the SM Mall of Asia Music Hall from March 13 and 14. On the last day, March 15 the singlets would be brought to the event venue.

Gunstart begins at 4a.m. with assembly time an hour before. No shuttles would be required since the start and finish lines are the same location.

The race maps elicited positive reactions from the gathered runners, many remarking that there was only one flyover in the entire race.

Castillo said the challenge for the popular Metro Manila running series is for them to keep innovating their events to keep the running community interested.

“Our role is to integrate with the running community ... We position our races so you can integrate your whole year in your running calendar. That’s how we coordinate the dates and the categories,” he pointed out.

“We’re not aiming to be the best running event. What we want to do is to give a series of running races that can help get a full running calendar for the community."