On a memorial wall in BGC, fans around the world pen tributes to Kobe

"Arigatou gozaimashita!!! Manba For Life," went one message in both hiragana and katakana, with some English mixed in. Thank you very much!!! Mamba For Life.

And running vertically down the curve of Kobe Bryant's temple were three names in Hangul, the alphabet of Korea.

Tributes in Japanese, Chinese, and Korean joined many other heartfelt messages at a tribute wall in the Toby's Sports flagship store in Bonifacio Global City, a well-known (and well-heeled) tourist hub. 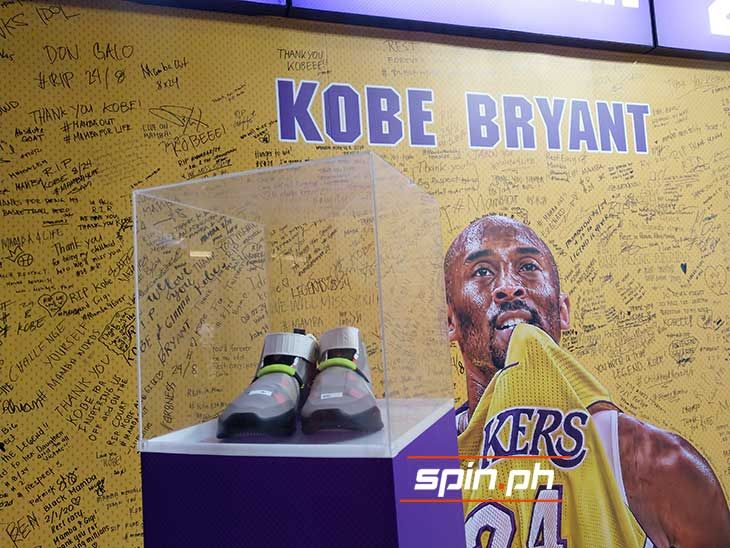 The sporting goods store opened up the wall on January 30, three days (in Manila time) after Kobe Bryant's helicopter crashed in Calabasas, California. He, his daughter Gianna, and seven other people perished in the crash.

Now, just two days later, the tribute wall is almost full. Among the messages at the center reads: "Thank you, Kobe, from: Toby's Sports Family." It is signed by Bobby Claudio, the company's founder. The only free space that remains to scrawl a farewell phrase or two is at foot level, or high above on the top edge. At the time of SPIN Life's visit, no one had yet dared to write on the giant image of Kobe printed on the middle of the wall.

In front of the tribute wall is a glass display case, with a pair of Kobe-branded sneakers inside. When SPIN Life visited, Nike's Kobe A.D. NXT FastFit FF 'Multi-Color' was on display.

In a message to SPIN Life, Toby's Sports marketing and communications head Andrea Tan said that the tribute wall was the company's "small gesture" to honor a man they knew Filipinos idolized.

“We are deeply saddened by the loss of one of basketball’s ultimate competitors. Apart from his talent and mentality on the court, we appreciate the way Kobe understands the importance of cultivating the future of sports, constantly sharing the valuable lessons he has learned throughout his career to the next generation; something that we, as the largest sports retailer in the country, also advocate," she said.

The company hoped that the wall would give fans a space to leave stories and messages for the late star. 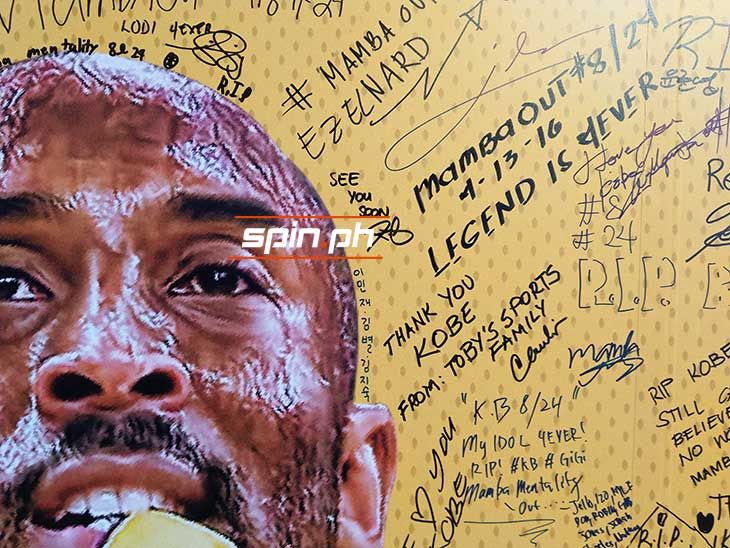 Hundreds of messages were scrawled on the tribute wall. Many were short battlecries, alternating between mournful and defiant: "#MambaOut #8/24", "Mamba Forever, RIP Kobe", "The Real MVP is Kobe".

Aside from his usual nickname of "Black Mamba", some called him "Lodi", a typically Filipino reversal of the word "idol".

A few took the time to write down messages of gratitude — "Thank you for being an inspiration to all basketball player[s], esp[ecially] in the Philippines!" — or disbelief — "RIP Kobe. Still can't believe. No words =( Mamba for life".

"My husband is always thinking of you," began one writer, before hitting the punchline: "I'm so jealous every day!"

One promised to keep his legacy alive: "I'll never forget to pass the shooting tradition to my kids!" The writer is presumably referring to the act of shouting "Kobe!" before releasing a shot, whether to a hoop or a wastebasket.

It's a tradition that's familiar to many would-be hoopsters all over the world. One could even say that shouting "Kobe!" right before throwing up the ball has become a prayer in itself.