Riders mostly in souped-up scooters, a lot of them learning how to do a proper burnout earlier in the day, set the world record for the Largest Simultaneous Motorcycle Burnout while big bike riders in Ducatis, BMWs and Harley Davidsons cheered from the sidelines.

"I am simply overwhelmed. I was extremely worried because the adjudicator was extremely strict," said organizer Jacque Ruby, country head of A+E Networks Asia Philippines.

There was a tense moment after official Guiness adjudicator Pravin Patel ordered organizers to do a second attempt. Under the guidelines, each rider must be able to hold a burnout for at least three seconds within a ten-second window to be able to fall under the 'simultaneous' designation.

Ruby and the assembled riders heaved a sigh of relief and celebrated after the Guinness World Records official announced that a new record has been set - the culmination of a five-day gathering of motorcycle clubs at the Tagaytay Convention Center.

The previous record of 213 motorcycles was set by the Harleystunts and Smokey Mountain Harley Davidson teams in Maryville, Tennessee in 2006.

One of the participants was Richard Cabundoc, who rode all the way from Tondo in Manila early in the morning with his nine-year old son Nichard just to take part in the event. The 39-year old businessman said he has been riding motorcycles since 1999. 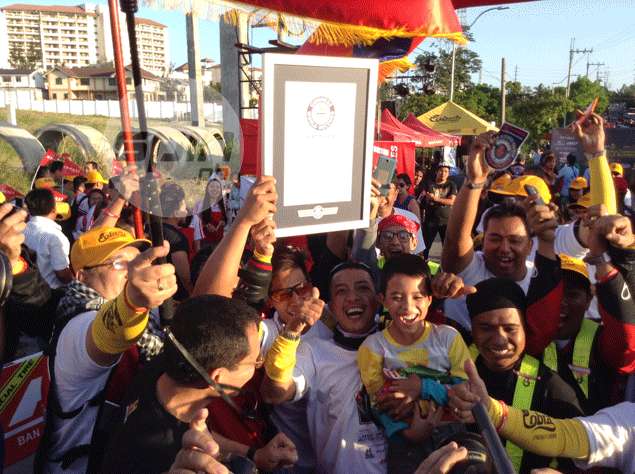 After the record was announced, he said he will pass on his history-making Kymco Super A to his son.

A motorcycle burnout is when the rear tire of the stationary vehicle turns on the ground to create white smoke.

Each participant received a numbered tag, an official event T-shirt, a baseball cap and arm sleeves as well as meals. They were also awarded a certificate of participation for their achievement.

The event is the third in a series of six Guinness official attempts in the Philippines in one week as part of the 'Make History' campaign by the History Channel.

Prior to this, organizers set the record for the largest parade of motorcycles with sidecars in Isabela and the largest serving of balut in Pateros. This will be followed by the largest reunion of people born in the same hospital, the fastest time to eat a 12-inch pizza and the most number of people using mouthwash simultaneously.

Spin.ph is one of the media partners of the event that was sponsored by Ropali Motorcycles, Kymco and FDR tires. 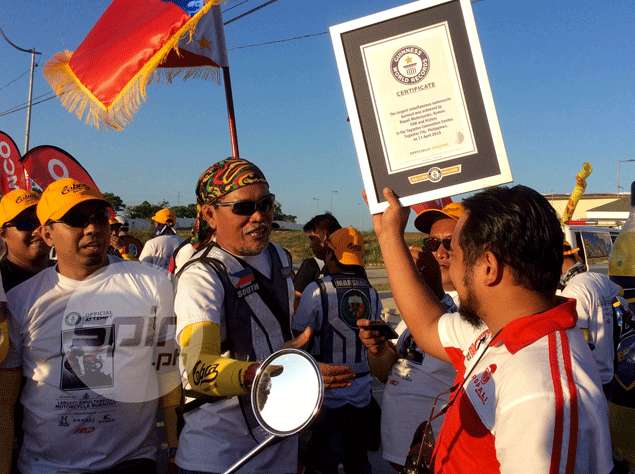