THIS weekend, (November 13-15, 2015) the country is hosting the largest international ultimate (frisbee) tournament in Asia.

Called Manila Spirits 2015, the annual event is organized by the Philippine Flying Disc Association (PFDA), and will be held at the polo fields of the Alabang Country Club, Ayala Alabang Village, Muntinlupa City, Metro Manila. More than 60 teams (made up of over 1,300 players) will gather for three days of competitive disc action.

Ultimate is the fastest growing sport in the country with more than 5,000 players competing in local leagues and tournaments. Movie star Derek Ramsay and TV personality Reema Chanco are two of the known players of the sport.

Here are five reasons you should go and watch Manila Spirits 2015: 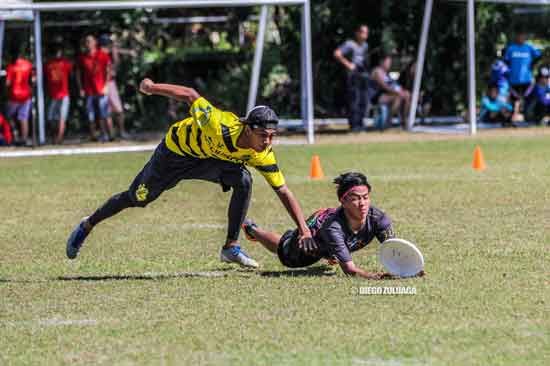 Ultimate is a non-contact sport, and players avoid causing harm to fellow players even during the most intense situations, but that doesn’t mean there’s a lack of excitement on the field. You’ll see players sprint, jump (“sky”), and dive (“lay out”) for the disc. The layout is one of the most exciting things to see when watching a game of ultimate: Players will fly with unbelievable horizontal explosiveness to catch a disc or to block an opponent’s pass.

2.This is the BIGGEST Manila Spirits ever. 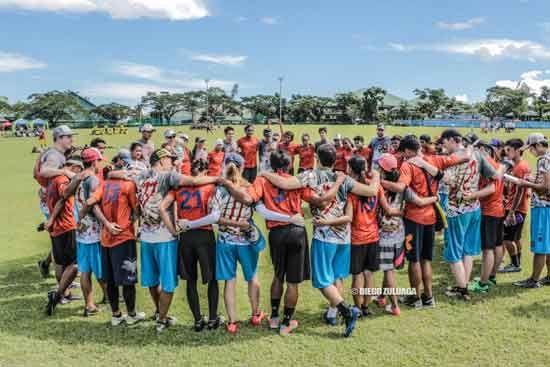 From 16 teams in Manila Spirits 2003, the tournament has now grown to have 64 teams competing this year, and is now the largest international tournament in Asia. Teams will be flying in from countries all over the world, including Australia, Cambodia, China, South Korea, Singapore, Brunei, and Hong Kong. Foreigners love coming to Manila because of the intense competition, the friendly people, and the overall amazing experience—24 of the 64 teams come from outside the country. Check out this video from Black Tie Project which perfectly captured last year’s Manila Spirits. 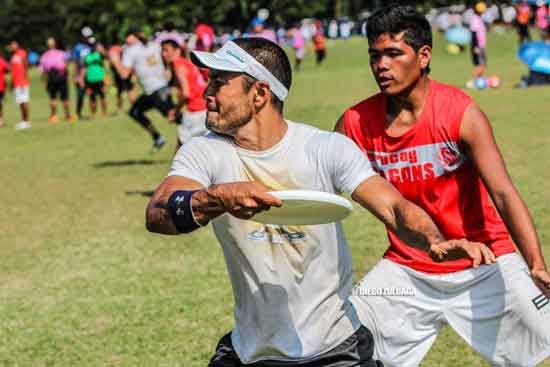 The finals match of Manila Spirits 2014 was between Mixed Nuts, back-to-back defending champions led by Derek Ramsay, and Sunken Pleasure, a homegrown Filipino team which has its roots at the Sunken Garden of the University of the Philippines Diliman. The thrilling match lasted almost three hours, with Mixed Nuts coming out on top by one point. 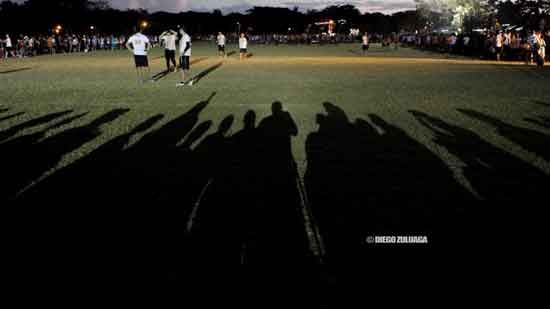 Will Mixed Nuts score a hat trick this year? Or will Sunken Pleasure come back stronger and dethrone the defending champs? Or, will we have a new contender? Come see Ramsay and his team live in action to find out!

4.The best of the USA and Japan are flying in.

The Philippines has been getting plenty of international attention from its impressive performance at recent world tournaments, so the local talent is more than enough reason to catch Spirits live. But this year is extra special as several top-caliber players are flying in from all over the world to compete at Spirits. Some of these players play professionally for the American Ultimate Disc League (or the AUDL, a professional league in the USA), including the 2015 AUDL MVP, Beau Kitteridge. An all-star team from Japan is also coming over. Composed mainly of players from Bunka Shutter Buzz Bullets, the best team in Japan, this team is led by veteran Matsuno Masahiro. 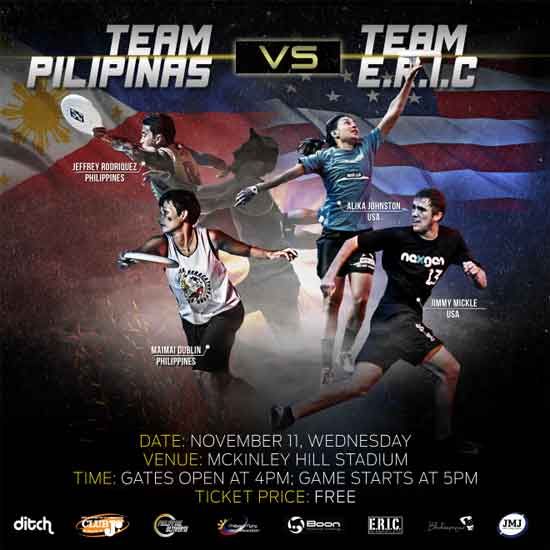 Leading up to the tournament, the PFDA will be having all-star games featuring Japan, USA, and the Philippines at the Emperador Stadium (also known as the McKinley Hill Football Stadium) at McKinley Hill, Fort Bonifacio, Taguig. The Philippine All Stars (playing as Team Pilipinas) will face the USA All Stars on November 11, Wednesday at 5: 00 P.M. The Japan All Stars (playing as Team Club Jr.) will go up against the USA All Stars (playing as Team ERIC) on November 13, Friday at 8: 30 P.M. Entrance to the Wednesday game is free, while the Friday game tickets are priced at PHP200, and PHP300 for the VIP section. Tickets may be purchased at the entrance. The showcase games were made possible by the Philippine Flying Disc Association’s partnership with Boon Technical Clothing, in cooperation with Ditch, Club Jr., Philippine Ultiverse, ERIC, Black Tie Project, and JMJ Sports Training Services. Poster was made by Philippine Ultiverse.

5.Ultimate is possibly the next Olympic Sport.

Ultimate received recognition from the International Olympics Committee (IOC) at its 128th Session in Kuala Lumpur, Malaysia last July. The World Flying Disc Federation (WFDF), the highest governing body of all disc-related sports, is now one of the 34 organizations recognized by the IOC. This development is huge for the sport, as it makes ultimate eligible for the Olympics. The WFDF is now working towards having ultimate be part of the 2024 Olympics.

To celebrate this milestone, the theme of Manila Spirits 2015 is “Olympic Games.” The event is organized by the PFDA in cooperation with Maynilad, Smart, PLDT, Primera Light Brandy, and is also brought to you by Gatorade, Rexona, Five Ultimate, Tagaytay Hotel, Nestle, Umbro, Club Jr., and ERIC. Media partners include Ditch, ANC, Spin.PH, Rappler, WhenInManila.PH, Philippine Ultiverse, and All About U.