European wrestling in focus as NXT UK reaches the Philippines

FOR the reigning NXT UK Tag Team Champions Pretty Deadly, having the chance to expand their reach to as far as the Philippines only bodes well for the growth of European wrestling as a whole.

"Obviously, the brand started off early with NXT UK already had a big reach. And then we started slowly to leave the European scene to North America, and we're slowly expanding out into the Philippines and explore a whole new market," said Sam Stoker.

Lewis Howley agreed, noting, "It's so exciting because if you see NXT four or five years ago, you know the huge growth that folks had in terms of the product itself and its reach. And then NXT UK, we're following the same journey, thanks to our help of course."

The braggadocious pair of Stoker and Howley will be among the fresh faces for the Filipino audience when NXT UK gets streamed on the TapGo app, a new subscription video-on-demand service, starting this Sunday at 9 p.m. on Tap Sports. 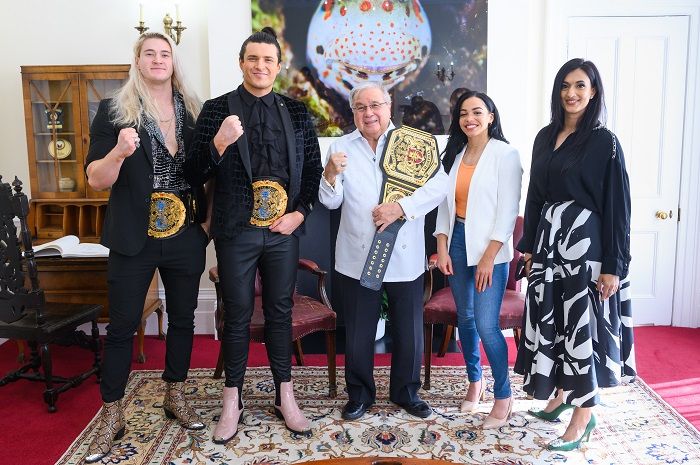 How to watch NXT UK

And the duo, collectively known as Pretty Deadly, promised nothing but pure entertainment for the whole family once their show gets broadcasted in the Philippines.

"You get your family, you sit down, and you watch NXT UK. You're gonna get a little bit of everything," said Stoker.

"If you've got your grandmother, she's gonna like entertainers. And we're loud, we're cocky, and we're proud — we're easy on the eyes for the grandma. But then maybe you've got a son who's a 10-year-old and maybe he likes some hard hitting action. We've got The Bomber Dave Mastiff and he's going to mess you up."

Stoker continued, "Then maybe your brother, maybe he's a sophisticated, smart man, he loves the game of chess. You talked about the game of technical wizardry, it's hold-for-hold, it's a technical style, it's nuanced. And I think within this realm of the WWE but particularly NXT UK, you've got everyone."

"You've got a little bit of everything," chimed in Howley.

To drum up excitement, Pretty Deadly, together with fellow NXT UK superstars Jinny and Aleah James recently visited Antonio Manuel R. Lagdameo, the Philippine Ambassador to the United Kingdom of Great Britain and North Ireland, and gifted him with an NXT UK Championship belt.

It was an exciting experience, Stoker admitted, as they had a chance to bond with the Philippine ambassador and gave them a slice of what it feels to be in the country.

"It was eye-opening, it was a great look into the culture. It was lovely to meet the ambassador," he said. "The heart of it, he's a family man. Afterwards, he was telling us about his children, his children's children. That to me spoke a lot about the country."

"We spoke about the great chicken adobo. I think we're gonna come over. I love chicken, I love adobo," he said with a smile.