Donald Trump hits NBA for turning into a 'political organization'

By AAMER MADHANI and DEB RIECHMANN

WASHINGTON — President Donald Trump said Thursday (Friday, Manila time) that the NBA has become like "a political organization," criticizing the league the day after player protests over police brutality led to the postponement of playoff games.

Senior White House aides earlier had suggested that the protests were not constructive and were hypocritical considering the league's relative silence about human rights violations in China, where U.S. pro basketball has a large audience. The president said in a radio interview this month that NBA players were "very nasty" and "very dumb" for kneeling during the national anthem to protest social injustice.

The Milwaukee Bucks kicked off the boycott Wednesday by refusing to leave their locker room for the game against the Orlando Magic. The players are demanding that lawmakers act to address police brutality and racial injustice. The NBA announced Thursday's scheduled playoffs were postponed, but the league hoped to resume play Friday or Saturday.

"They've become like a political organization, and that's not a good thing," Trump told reporters Thursday, noting that the league's ratings are down from previous seasons. "I don't think that's a good thing for sports or for the country." 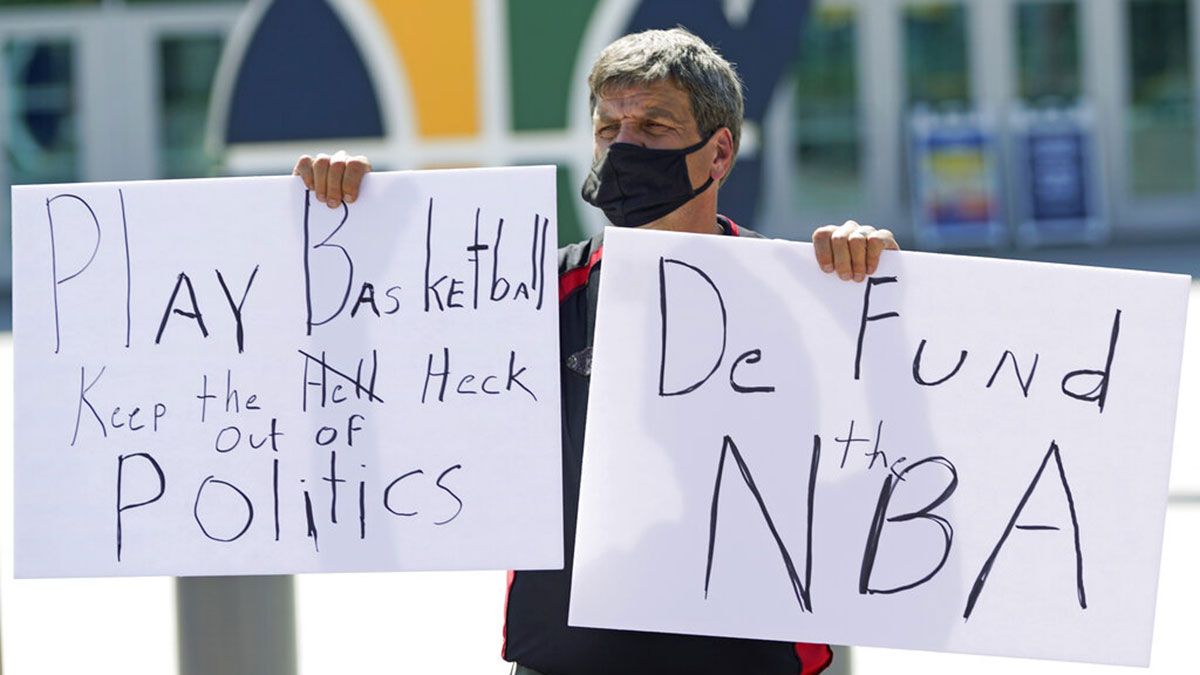 Trump, who was to deliver his renomination acceptance speech Thursday evening at a scaled-back Republican National Convention, has made restoring "law and order" to cities a centerpiece of his campaign during a summer of sometimes violent protests following the death of George Floyd, a Black man whose killing by Minneapolis police in late May spurred national unrest.

Earlier Thursday, Vice President Mike Pence's chief of staff said in a CNN interview that NBA protests spurred by the police shooting of Jacob Blake in Kenosha, Wisconsin, are "absurd and silly" when compared to their response to ongoing to human rights violations in China.

The NBA last month faced scathing criticism from Republicans after an ESPN report that young participants in a league program in China were physically beaten by Chinese instructors and were not provided proper schooling.

Short also questioned why the league's players and coaches have largely refrained from criticizing China's human rights violations and from expressing support for Hong Kong. In a seperate MSNBC interview Thursday, Short said the NBA's "embraced the Communist Party."

"There is a contrast to the positions they've been taking," Short said.

The league and its players have been outspoken in calls for reforms in the aftermath of the killing of Floyd. The NBA has even incorporated its support for the Black Lives Matter movement into player uniforms and advertising. Trump has called that movement "a symbol of hate."

"NBA players are very fortunate that they have the financial position where they're able to take a night off from work without having to have the consequences to themselves financially,' White House senior adviser Jared Kushner told CNBC on Thursday.

In a separate appearance before an event hosted by Politico, Kushner said that he planned to reach out to Los Angles Lakers star LeBron James, an outspoken advocate for policing changes.

"Look, I do think that peaceful protest has a place and it has importance," Kushner said. "But I do think that what we need to do right now is make sure that we take the anger that people have and we have to move from slogans to constructive solutions."

Sen. Tom Cotton, a Trump ally, told Fox News that the reaction by NBA players to the incident in Kenosha was "premature."

"We shouldn't be jumping to conclusions until we have all the facts," said Cotton, R-Ark.

Not everyone in Trump's circle was critical of the NBA players move. The Magic, which is owned by family of Trump's Education Secretary Betsy DeVos, issued a statement saying it stood united with players and the league in "condemning bigotry, racial injustice and the unwarranted use of violence by police against people of color."
___