These are three go-to foods when you're on a diet

If you've heard that line before, you might think that your bros are admiring your bulging pecs and slim-fit V-neck. But if it turns out that your "pecs" aren't so solid and that your shirt only became a slim-fit by accident, then you might need to shed a few pounds to regain some of your lost pogi points.

There are a lot of pseudo-science theories and urban myths surrounding weight loss, and you'll often hear about people's own little tricks that supposedly worked for them. On the other hand, reading up on the science behind what you should and shouldn't eat can get pretty confusing in a hurry.

To make your weight loss journey simpler, here are a few celebrity-proven foods that you can easily add to your diet or use as alternatives for other items in your meals. Take note though that these aren't cure-all solutions for weight loss.

"There is no single food or single food group which we can consider to be the best when it comes to losing weight. Each food item or group has its own role in nutrition, particularly in weight loss," says Pamela Laiz, a registered nutritionist-dietitian and Masters in Public Health graduate.

Magicians are experts at making things disappear. One magician did a unique kind of disappearing act on himself.

American magician and TV host Penn Jillette dropped a whopping 75lbs in just 83 days. His trick was to eat nothing but plain potatoes for two weeks, then he gradually added vegetables into his diet for nutrients. By Jillette's admission, he's "not good at moderation" and needed to take his weight loss plan to the next level in order for it to work.

Tip: We're a country of rice eaters and it's hard to say no when extra is offered, but supplementing your ulam with potatoes gives you a more organic source of carbohydrates.

One a day keeps the doctor away, right? Turns out they'll keep the pounds at bay, too.

To play an anorexic insomniac in The Machinist, Christian Bale survived on a diet of a can of tuna, an apple, and nothing else. The diet and the transformation was extreme: the 6-foot Dark Knight got down to a skinny, rib-baring 120 pounds and looked every bit like a guy with an eating disorder.

Tip: Instead of street food or something from the convenience store, an apple makes for a quick and healthy merienda.

On its own, chicken is a great source of protein. The trick is to choose the leanest part, which is the part with the least amount of fat.

To lose weight for his role in Courage Under Fire, Matt Damon ran around 13 miles a day. He also came up with his own diet plan, which consisted of surviving mostly on chicken breasts. He admitted that the diet was the hardest part of the role, but it worked: Damon got down to 139 lbs from his usual 190 lbs to play the role of a military medic. 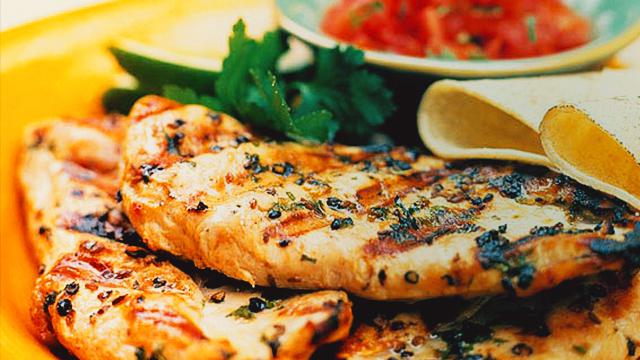 Tip: Switch up your usual red meat or pork dishes with some chicken breast for a healthier meal.

While the foods listed here are healthy and can be included in your weight-loss plan, you shouldn't just eat those foods alone like the celebs did to lose weight.

According to Laiz, drastic diets can work for a little while but they're not sustainable. "[Drastic diets are] effective because these are usually extremely low fat, low-calorie diets. A low calorie diet, usually less than 1,200 kcal per day, starves the body which forces it to use stored energy, which is your body fat, and makes you lose weight in an instant," she says.

But there is a downside to doing them for too long. "[Drastic diets are] dangerous to your health. They deplete you of other essential nutrients, resulting in other diseases. They can compromise your immune system and make you more susceptible to infection," Laiz says.

Variety, balance, and moderation are all key in an effective and sustainable weight loss plan. Laiz lists: "High fiber foods are beneficial. Aside from helping remove the excess fats in the body, they make you feel full longer. Healthy fats and ample amounts of good quality protein are also advisable because they increase satiety and they make you feel full, which leads to less food intake. Lastly, drinking water is essential."

One of the biggest misconceptions about weight loss is that you can just eat less without doing any exercise. "Exercises that involve cardiovascular activities such as running and jogging are always recommended to remove the excess fats in the body," advises our diet expert. "These activities ensure that you reach the fat burning phase."

"For maintenance, exercises that involve core strengthening such as yoga and muscle building such as weight training can also help as they induce muscle gain which leads to a more effective metabolism. Remember, more muscles in the body equates to more calorie burning capacity and lesser fat accumulation."