BANGKOK — New Zealand reported zero new cases of the coronavirus on Wednesday, the second day in a row without any new cases and the fourth day since early last week.

Director-General of Health Ashley Bloomfield said it was encouraging news as the country prepares to ease many of its lockdown restrictions from midnight. Most businesses, including malls, retail stores and sit-down restaurants, will be able to reopen. Social distancing rules will remain in place and gatherings will be limited to 10 people.

"The sense of anticipation is both palpable and understandable," Bloomfield said.

The lifting of restrictions will coincide with the release of the government's annual budget on Thursday.

Prime Minister Jacinda Ardern said the country faced the most challenging economic conditions since the Great Depression because of the virus.

"New Zealand is about to enter a very tough winter," she said. "But every winter eventually is followed by spring, and if we make the right choices we can get New Zealanders back to work and our economy moving quickly again."

In other developments around the Asia-Pacific region:

THAILAND REPORTS NO NEW CASES: Thailand has reported no new confirmed cases of the coronavirus for the first time in more than two months. There also were no new deaths reported on Wednesday, leaving the country's total at 3,017 cases with 56 fatalities. Since the beginning of May, Thailand has reported single-digit daily increases with the exception of May 4, when a cluster pushed the number to 18. The last time Thailand reported no new cases was on March 9, when there were 50 cases in total with a single death. Thai authorities have been selectively easing restrictions meant to combat the coronavirus. Bangkok restaurants were allowed to reopen last week for sit-in dining with social distancing.

Boxes of face masks are sold at Korean Town in Tokyo.

EASED RULES MAINTAINED, FOR NOW: South Korea has no immediate plans to return to strict social distancing rules after a spike in cases. Vice Health Minister Kim Gang-lip told reporters the government needs more time to analyze details of recent outbreaks before determining whether to change the guidelines. Daily cases had dropped into single digits before spiking to around 30 each day recently. Nightclubs in a Seoul entertainment district were linked to many of the new infections. Clubs in the Seoul area closed again after the outbreak, and the reopening of schools has been delayed. South Korea's 26 new cases reported Wednesday by the Korea Centers for Disease Control and Prevention brought the national tally to 10,962 with 259 deaths.

MAJOR CHINESE MEETING LIKELY TO BE SHORTENED: A shorter-than-usual ban on drone use in the Chinese capital is seen as a signal that China will curtail its major political meeting of the year because of the coronavirus. Beijing police announced Wednesday that the use of drones, balloons, gliders and other low-flying objects will be banned for nine days, from May 20 to May 28. Such bans are common during major events. The National People's Congress usually happens over two weeks in March but was postponed this year because of the virus outbreak. It is scheduled to start May 22, so the flying ban suggests it may last just one week. Some participants in a recent preparatory meeting for the congress joined by video conference, sparking speculation that some of the 3,000 delegates to the congress may do so too. 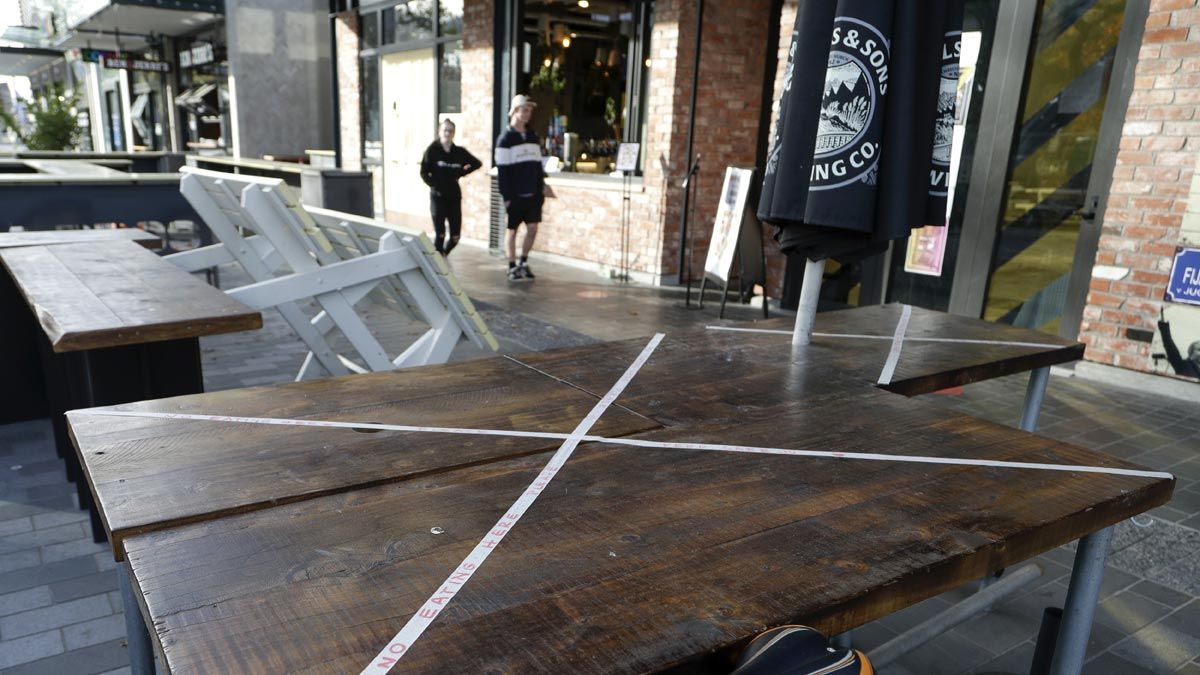 Tables are taped off for no eating outside a food market in central Christchurch on Monday.

7 NEW CASES IN CHINA: China reported seven new cases Wednesday, six of them in the northeastern province of Jilin where authorities have raised alert levels and suspended rail connections to a county where a cluster of unknown origin has been growing. China has reported a total of 4,633 deaths among 82,926 cases. Authorities are preparing to test all 11 million residents for the virus in Wuhan, the city where the pandemic began late last year. The effort was initiated after a new cluster was discovered, the first local infections the government has reported in Wuhan since before a lockdown was eased in early April.

SUMO WRESTLER DIES: A 28-year-old Japanese sumo wrestler died Wednesday from the coronavirus. Shoubushi, whose real name was Kiyotaka Suetake, is the first sumo wrestler known to have died from the virus and is among the youngest victims in Japan. He developed a fever on April 4 but could not get a test or find a hospital until four days later. Japan has set a very high bar for testing due to a lack of capacity. Avoiding close contact with others is a challenge in sumo, where wrestlers live together and train and eat together. Several other wrestlers have also been infected. The Summer Grand Sumo Tournament scheduled to start May 24 was canceled earlier this month.