SEOUL, South Korea — South Korea on Sunday reported 34 additional cases of the coronavirus amid a spate of infections linked to clubgoers, as President Moon Jae-in urged calm saying “there’s no reason to stand still out of fear.”

Figures released by the Korea Centers for Disease Control and Prevention took national totals to 10,874 with 256 deaths. The agency said 9,610 have recovered and 10,128 others were being tested for the virus.

The agency said 26 of the 34 new patients were locally transmitted cases while the others came from overseas. It was the first time that the daily jump has marked above 30 in about a month.

Most of the cases in the past few days were linked to nightclubs in Seoul’s Itaewon entertainment neighborhood. A 29-year-old man had visited three clubs before testing positive last week.

Seoul Mayor Park Won-soon on Saturday ordered more than 2,100 nightclubs, hostess bars and discos closed and urged others to enforce anti-virus measures. On Sunday, the governor of Gyeonggi province surrounding Seoul ordered the two-week shutdown of all nightclubs there. 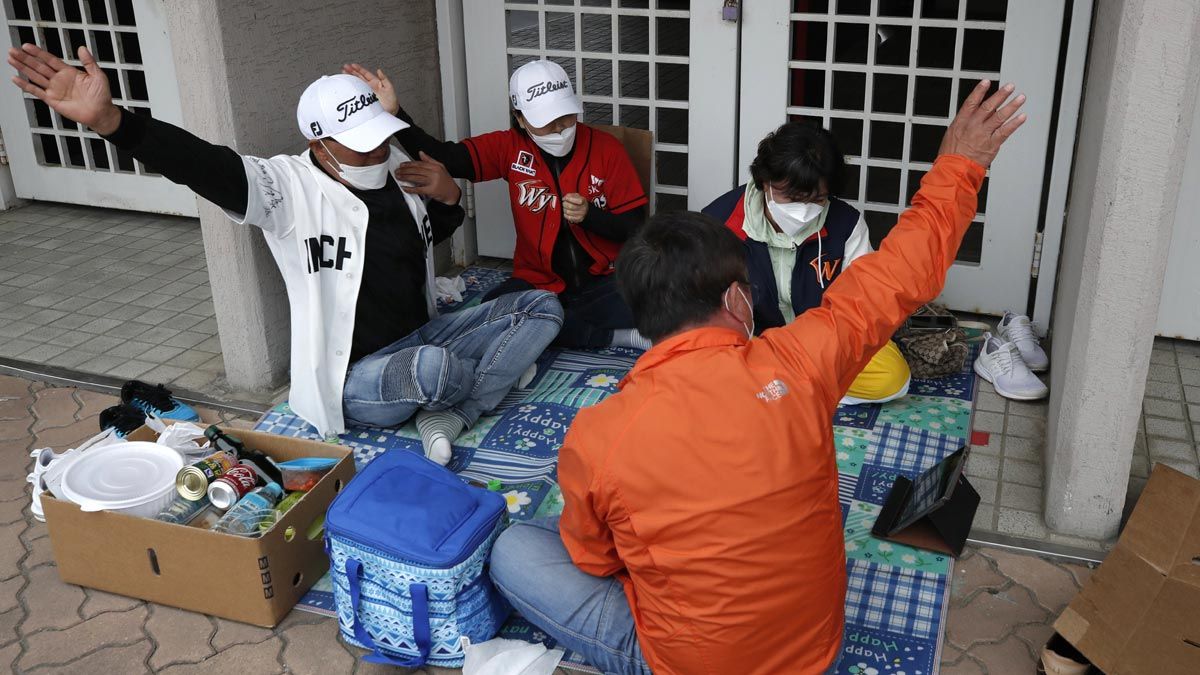 “The infection cluster, which recently occurred in entertainment facilities, has raised awareness that even during the stabilization phase, similar situations can arise again, anytime, anywhere in an enclosed, crowded space,” Moon said.

“We must never lower our guard regarding epidemic prevention,” he said, adding his country had “the right quarantine and medical systems combined with experience to respond quickly to any unexpected infection clusters that might occur.”

Moon said his government will concentrate all its capabilities on overcoming the economic damage, which he described as “colossal.”

“We cannot survive if we fail to turn this crisis into an opportunity,” he said.

He said South Korea’s trade balance in April recorded a deficit for the first time in 99 months, and that the service industry contraction is expanding into a manufacturing industry crisis.

NEW CASES IN CHINA: China reported its first double-digit rise in new cases in 10 days on Sunday, saying 14 had been detected, 12 of them domestic infections and two from abroad. Eleven of those domestic case were in the northeastern province of Jilin and one in Hubei, whose capital Wuhan was the epicenter of the global pandemic. Jilin shares the border with North Korea, where the virus situation is unclear. No new virus deaths have been reported in China for almost a month and the number of people in treatment for COVID-19 nationwide fell to 148, with another 798 under isolation. China has reported a total of 4,633 total death 82,901 cases. The jump in new cases could fuel concerns over how quickly to lift strict social distancing measures and reopen schools and other public institutions. Widely disseminated photos of people socializing in Shanghai’s bar district over the weekend drew some criticism online.

MOON STRETCHES OUT HAND TO NORTH: South Korea’s liberal president says his proposal to North Korea to jointly tackle infectious diseases such as COVID-19 is still on the table, though the North hasn’t responded. President Moon Jae-in told reporters on Sunday that he believes the North is suffering “various difficulties” over the coronavirus pandemic. He didn’t elaborate. His spy agency recently told lawmakers the pandemic had shrunk the North’s external trade and caused panic buying in Pyongyang. Moon said he’ll try to persuade North Korea to accept his offers for many reconciliation projects after the pandemic is stabilized. Moon has proposed reconnecting severed railways, resuming reunions of families split by war and sending South Korean tourists to North Korea.

AUSTRALIA BACKS EU CALL FOR VIRUS PROBE: Health Minister Greg Hunt says Australia’s government supports a European Union motion for an independent investigation into the origins of COVID-19 in China. Australia has called for such an inquiry for some weeks to better understand how the coronavirus started in Wuhan, China, to be able counter such pandemics in the future. The move has drawn sharp response from China, Australia’s No. 1 trading partner. “We support the EU motion which includes an independent investigation, regulatory work on wet markets and also the potential for independent inspection powers,” Hunt told Sky News on Sunday. Ursula von der Leyen, the head of the EU’s executive arm, said last week she would like to see China work together with her organization, and others, to determine how the virus emerged.

INDIA BEGINS REPATRIATING NATIONALS: An Indian navy warship carrying Indians stranded in the Maldives because of the coronavirus lockdown has docked in Kochi, a port city in the southernmost state of Kerala. The INS Jalashwa with 698 returning citizens aboard is the first vessel to arrive Sunday as part of India’s massive repatriation mission. India is also using national carrier Air India to bring back thousands of stranded citizens from the Persian Gulf, the U.K. and elsewhere in Asia. Passengers have been charged a fare to return home. Hundreds of thousands of Indians have signed up for additional repatriation journeys this month. India’s lockdown entered a sixth week, though some restrictions have been eased for self-employed people unable to access government support to return to work. Nationwide though the pace of COVID-19 infection is growing, and India has reported 60,829 cases, including 19,357 recovered patients, and 2,109 deaths.