THIS is not your usual adventure game.

Berghaus, the UK-based outdoor clothing and equipment company, is introducing a new dimension in adventure racing in its Berghaus Urban Adventure Games.

The event, scheduled for November 15 at the Globe Circuit Event Grounds in Circuit Makati, promises to take adventure racing to the digital age.

The race features the first app-based race format where teams composed of three members each will receive their challenges on their Android mobile phones as they race to accumulate points before the clock runs out.

Organizers said a mix of mental and physical challenges will push teams to their limits as they run through various obstacles, test their strength at CrossFit stations and solve riddles/ puzzles in a digitized scavenger hunt.

Participants and spectators can track their progress in real time as team scores will be available online throughout the day. A leaderboard will also be flashed regularly on a giant LED screen at the 2014 Banff Mountain Film Festival World Tour, held in conjunction with the UAG.

After downloading the app on their mobile devices, members of the media and the blogging community invited to the launch at the Quorum Center gym were given a sample of what’s in store for the adventurers.

With mobile phones in hand, mediamen were given tasks, asked to perform challenges and had to answer questions in order to gain as much point as possible in 30 minutes. Winners were given Berghaus merchandise as prizes.

Teams can select three categories to join. The Fun category will be scored but not timed while Competitive and Elite teams will be given a limited time to complete as many challenges and accumulate as many points as possible.

Cash prizes will be awarded to the first placers in all three categories. 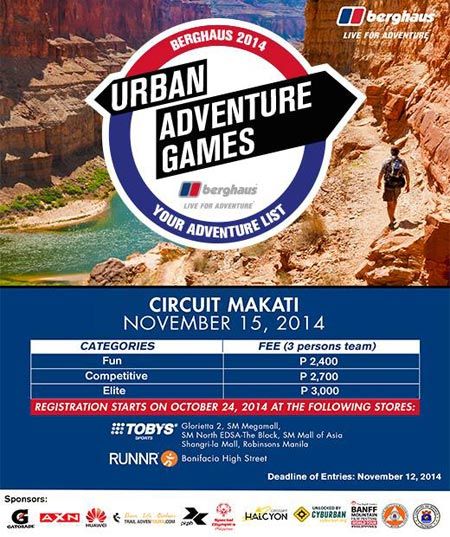