After a year's absence, popular Condura Skyway Marathon vows to return in style in 2015

AFTER a noticeable absence from the 2014 running calendars, the Condura Skyway Marathon is set to make a grand return next year.

Organizers of one of the most anticipated marathons in the country made this assurance to members of the media during the PSA Forum on Tuesday as they bared details of next year's race which has embraced the theme 'Be a Hero for a Hero.'

A field of 15,000 runners is expected in four race categories- 42K, 21K, 10K and 6K - when the elevated Skyway is transformed into a one-of-a-kind running course at the stroke of midnight on February 1.

The race will start and end at Filinvest City in Alabang.

“Be a hero for a hero. We started this race with the vision of coming up with a world-class race and to make the Philippines a better place. It’s always been for a cause,” said Ton Concepcion, the founder and chief organizing officer of the Condura Skyway Marathon.

Concepcion said he was aware of the disappointment of the members of the running community after they announced there was no race in 2014.

The beneficiaries for the race’s seventh edition are the children of fallen soldiers under the auspices of the Hero Foundation, a non-government organization established by the late President Cory Aquino, among others.

“This sends a wonderful message to soldiers that we care. That we have your back and that we appreciate what you are doing for the country,” said Michelle Chan, Hero Foundation’s director for marketing and resource mobilization.

Chan said they have supported the education of more than 2,400 children, mostly from Mindanao. More than 980 have graduated from high school and the next race will directly benefit at least 125 high school scholars.

Rio dela Cruz of RunRio said more than 9,000 people have registered as of posting time and the full marathon has become so popular that they decided to open up additional slots.

As a precaution, registration automatically stops once the number reaches 15,000.

Dela Cruz, himself a Hero Foundation ambassador, said they will set up hydration stations every 1.5 kilometers and assured that there will be adequate portalets.

Bhaby Lorenzo of Asics said that as an additional incentive to join the marathon, runners who registered and paid using their credit cards will get a 20 percent discount on all regular items in Asics' eight brand stores.

It is also bringing back its ‘Run for Free’ promo where customers who purchase a pair of Asics running shoes will also receive a free prepaid card which can be used to register in the buyer’s preferred race category.

Organizers said that all registrations will be done online (fees range from P900 to P2,000). All race kits will include an event shirt, regardless of distance. A dog-tag inspired finisher’s medal will be given to each participant who completes the race. A special finisher’s shirt will be handed to marathon and half marathon runners. 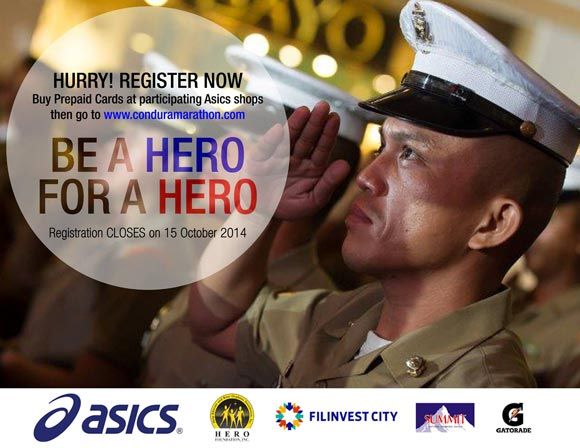